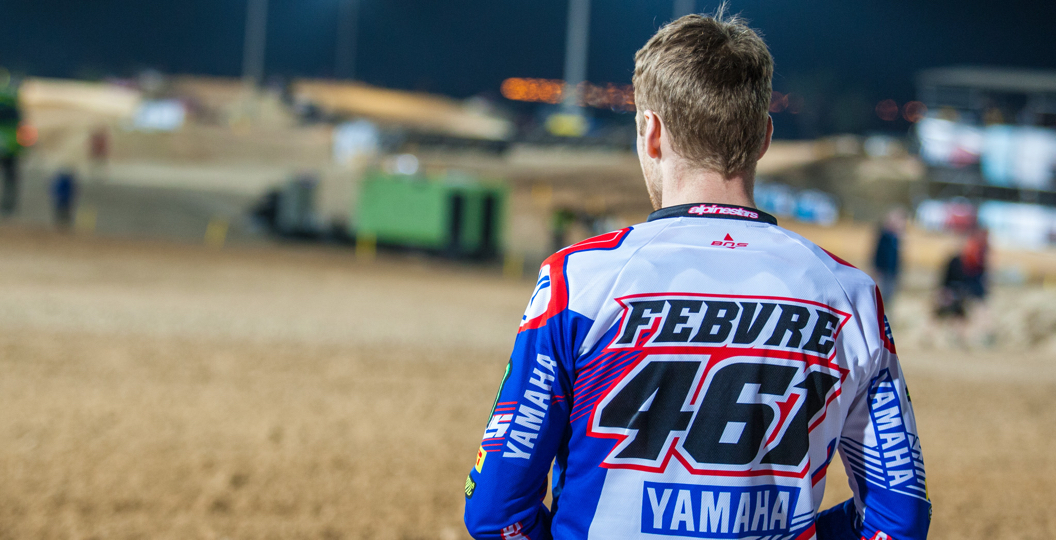 Sometimes a rider can take advantage of certain factors to claim victory, but in a manner that leaves pundits questioning just how well they performed. Look at Ryan Dungey in Atlanta; he recorded consistent laps, but his main rivals were marred by poor starts and, consequently, some are reluctant to peg him as the favourite to win again this weekend. That is not the case when looking at how Antonio Cairoli performed at the Grand Prix of Qatar, however, as he outduelled Tim Gajser to win in a convincing fashion.

Although Cairoli was brilliant in the Italian Motocross Championship, I was still not quite convinced that he would come out and dominate in Qatar. Why? Well, he has never thrived at the Losail International Circuit, despite the fact that he proclaimed in our post-race podcast that he is a fan of how technical the circuit is, and he had only won one moto in the Middle East prior to this past weekend. That happened at the very first event that was run at the man-made facility five years ago.

Despite all of that, ‘222’ served notice to his competition that he is poised to challenge for a ninth title. It would be quite remarkable if he manages it, as no rider has relinquished their crown and then won again since the MXGP (or MX1 as it was once known) class was introduced in 2004. Tim Gajser is not about to roll over, however, as he proved to be just as strong as his foe, even though he was attempting to overcome an illness that restricted him to his bed on the day following the event.

The illness that the reigning champion was dealing with was well-publicised through various outlets, but Cairoli was actually dealing with his own ailment. “I came from a very difficult week; I was sick until Friday, taking pills and medicaments for my intestinal flu that I got back in Italy,” he told us. “I didn’t really expect to do such a great job.” This could boil down to an argument over who was the sickest, but should we just take a moment to appreciate how far these two greats were willing to go when it would have been so easy to settle for a lesser result?

With so many factors to consider, can we really read too much into the results? If both riders are at their best this weekend, and it seems that they will be, then it would not be too much of a surprise to see the results flop. It seems that some time may have to pass before we see another rider enter the fray at the head of the field though. Clement Desalle was, of course, impressive, but he did not finish on the box twice in a row at all last year, so he needs to prove that he is here to stay.

Just as I mentioned on PulpMX, as well as in various columns here, Romain Febvre has work to do to catapult himself into title contention. A third in a moto at the opener is great, but the way in which he got to that point must have been tough to swallow. The Frenchman, who was perplexing at points last year, got the holeshot and was dropped by the top two immediately. There was no fight there at all. It was just round one, so you have to give everyone time to work out some of the kinks, but the likeliness of him crashing does not appear to have shrunk much either. Two small falls cost him between five to nine points.

I honestly believe that a part of this battle that Romain Febvre finds himself in is mental; he needs a Grand Prix win or something to just boost his confidence. ‘461’ struggled to get on the pace of the leaders at the end of last year, but was close enough, and then had a few crashes in the off-season (he hit a wall at Paris-Lille and knocked himself out at the first round in Italy) that cannot have helped create any kind of momentum. Watch this space, I would say, as this will be one of the more intriguing stories to follow. Febvre was dominant in Thailand last year and the race this weekend should run in similar conditions, so perhaps everything will turn around?

That is enough about the various contenders anyway, as everyone will analyse them. What about the guys who were overlooked in the premier class, despite showing some flashes of speed? Jordi Tixier is the first name that springs to mind. I know that you are questioning that, as his motos were far from noteworthy, but his practice times were good! Tixier was second in free practice and three seconds down on Cairoli, then ninth in the second session and just six tenths down on the top spot. Ignore the fact that he had the nineteenth gate pick in the qualifying heat, as that was a result of a penalty that was handed out after he failed to respect the chequered flag.

That could have destroyed all of that momentum that he managed to generate actually, but he got a reasonable start from the outside and then salvaged the tenth pick for the following day. Still, mediocre starts held him back on race day too and then there was not much room to make progress. I would look for him to do better than ninth in the coming weeks, however, like starting knocking on the door for a fifth when things go his way. Considering he did not manage that at all through his rookie season, it would be a step forward. The bad news is that there are some very fast riders, who have achieved a hell of a lot more in this class, right ahead of him.

Max Anstie was in a similar boat to Jordi Tixier, as some great practice times did not really translate to the motos. Bad starts were the reason for that, but I think that he can work from this base and crack the top ten consistently. Whilst we are on the subject of Anstie, what about that statistic that we ran in our regular ‘Stat Sheet’ feature on Wednesday? Anstie garnered nineteen points on Saturday night, which is one point more than what you get for fourth in a single moto, but never did better than that on a 250F in Qatar. Crazy! That probably brings up some bad memories from that year that he was on track to win, but suffered bike issues.

Oh yeah, what about Jeffrey Herlings? Honestly, I thought there was a chance of him defying the odds and cracking the top five. This wrist injury is going to be more of a problem than anyone thought, however, and does not seem like it is going to get any better. Gaining another thirteen points on Sunday sounds like the best-case scenario, but it could actually be a tougher challenge. ‘84’ is lacking some fitness and, seeing as conditions are going to be extremely hot, could be in store for some long motos.

“Our goal was to get between fourteen and twenty points,” Herlings told us at midnight on Saturday. “Obviously we got only thirteen, but I think for next weekend it’s the same thing; try to get around twenty points. By then we’ll be around fifty points behind the leader, but hopefully in Argentina I can be running up with the podium.” It is too early in the season to think about packing it in, of course, but you have to think that will be an option if things have not improved by the time that event rolls around. Remember, it is just over two weeks away!

No matter what path Jeffrey Herlings elects to take in the coming weeks, it seems that Red Bull KTM are poised to contend in both classes. Pauls Jonass came out firing, to the surprise of some, as he swept the two motos and led every lap en route to those victories. ‘41’ was not as dominant as that would lead you to believe, however, as Benoit Paturel was faster each time and restricted by the one-lined nature of the Losail International Circuit.

Would things have played out differently, had the circuit been a little more open? Perhaps, but you have to tackle the track that is ahead of you. Paturel was actually close to making a run in that second moto, but overshot the turn following the finish with a couple of laps to go. I actually think that the conditions in Indonesia could suit the Frenchman more than anyone else, so do not be surprised to see him emerge as a Grand Prix winner.

Do you want to know who was really good in Qatar, but just struggled to put it together in the two races? Vsevolod Brylyakov. The Russian topped two of the practice sessions, something that he has never done before, and made more passes than anyone else in the motos (unofficially). Crashes restricted him in those races, but he was one of the few guys who could carve his way through the field with ease. Obviously crashes seem to occur too often, but once that is straightened out he could win a Grand Prix. Brylyakov really was that good!

Before we sign off, we must give a tip of the hat to Julien Lieber. Lieber, who is working from beneath the LRT (Lieber Racing Team) umbrella, defied the odds to challenge for the win, following a full year away from the FIM Motocross World Championship! Hip injuries were the reason for that absence, of course, but everything is obviously right where he needs it to be now. Just how much of a privateer is he? There are not even enough logos on his bike to fill the back mudguard!

There you have it, some thoughts from what may have been the final Grand Prix of Qatar and a little look ahead to Indonesia. Round two could get interesting, speaking of Indonesia, based on what we have seen thus far. Stay tuned.