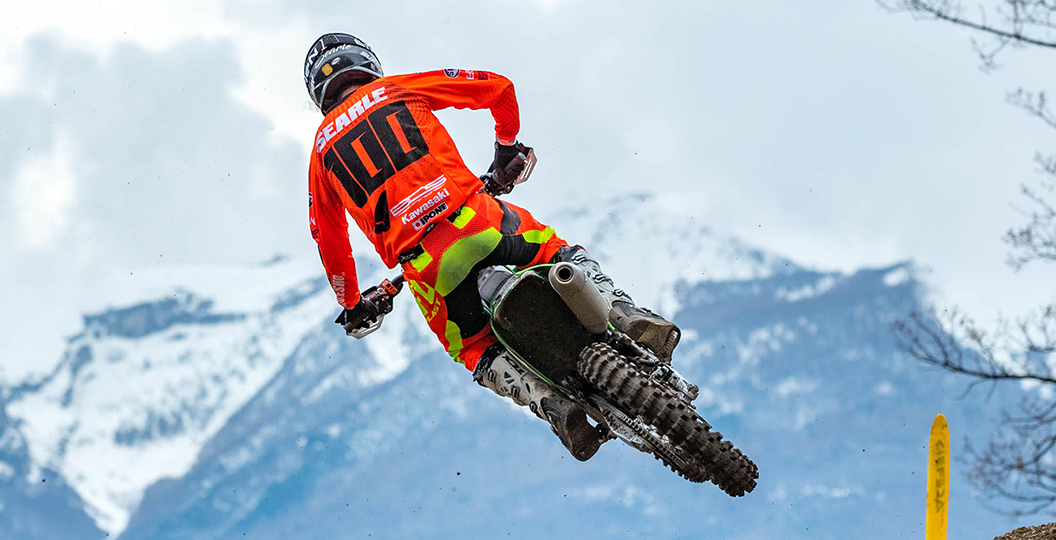 Tommy Searle has had an up-and-down time of it in recent weeks, but speed has always been there. Things got back on track at the Grand Prix of Trentino over the weekend, as he ended the event with a solid showing in moto two, but there are still a lot of things that he wants to improve, as he reveals in this MX Vice interview from Pietramurata.

MX Vice: Kind of like a tale of two motos for you. The first one not so good. In the second one you got a start and ran up front, which we all know you can do. That sums up your day.

Tommy Searle: Yeah. The first one I came through. I did not get as good a start, then I was thirteenth and I made a mistake and crashed. I finished seventeenth. Nothing really great about the race. I was not happy after that race, obviously, then the second race, I got a better start. I was running up front. I still need to be a little bit more aggressive on the first two or three laps, I think. When people come past I am like, “He is in a hurry.” They are really pushing.

Sometimes I am just not on it enough. When you start up there really you need to go or you lose positions, which is what I did. I lost a couple of positions on the first few laps and I just stayed where I was really. I was behind [Ivo] Monticelli and that was sort of my position there. I was trying to take some different lines to save my energy and find some different lines throughout the track to save some time. That was it. I was there and then last lap [Glenn] Coldenhoff found his way around me.

There was a lapper and I took the wrong line with the lapper. I followed him through the rut, and he managed to pass me, so I think I ended up eighth. I am happy with that, to end the weekend on a better note. This weekend has been a struggle from first practice all through yesterday. We really need to work together as a team in this four-week break because… We just need to. There is too much going on. Come race day there are too many changes and things happening. This four-week break has come at a good time for us. Hopefully as a team we can improve.

Has intensity always been a problem for you? I don’t feel like it has. Is it just a thing this year?

No, it has not been a problem. I actually feel okay. I am trying to work a lot on that in the week and I feel alright. I just need to maybe wake up a little bit more when I get that start and take advantage. I feel like a couple of people passed me on the first laps who should not have done. I ended up following them all race, rather than being in front of them. Just something I need to be aware of in the next races. I do not feel it is a problem for me that I have to work on to improve. I just have to do it come race time.

I don’t know if I should ask, but engine? Same as Argentina and Matterley?

I don’t know, to be honest. We changed a couple of different… In practice I started with one and then in timed training we had another. I got a good start with the one today, so it was not too bad. I just want a little bit more consistency when I come to the races with the bike. I think if we can test throughout these next four weeks, even if we just get a few days, then we can come to the races, know what we are using and stick with that. Everyone can be on the same page.

Is the British still useful for testing like this? Obviously, you do not have all of these BOS guys there, so it is different, but is it still useful?

Yeah. The British is always useful. I really like racing that. In the British I work with Matt [Hutchins] from Evotech. We are obviously using the BOS suspension, but Matt does a lot of my stuff there, so it is a little bit different. He is a really good guy, so I am looking forward to next week racing at Lyng. I love that track. Hopefully I can win there. It is always useful, the British Championship. It is always nice to get wins and build the confidence.

Honestly, I do not have a clue why, but today I was getting blown up with people asking if you were injured. I don’t know what the hell was happening. There may be rumors going around, but are you broken?

No. I feel good, actually. After the first race I was disappointed, because at the minute I am really strong. I have been working hard. I feel good in the week on the bike. I just wanted everything to come together at the races. We really need to work hard in this break as a team, so that when I come to the race everybody is on the same page.

We know what suspension we are using. We know what engine we are using. I can be comfortable and use the practices as they should be used, to warm up for the race. Not be switching bikes in each practice. I think yesterday we changed too many things and you just cannot do that on a race weekend, so there needs to be changes made there. I think we can do that and come out swinging in Mantova.