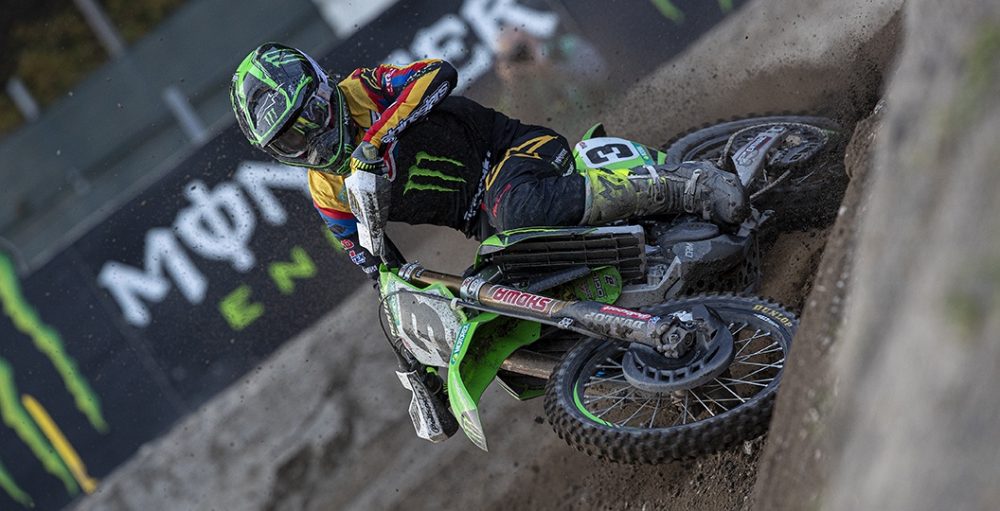 Romain Febvre has been rather underrated since joining Monster Energy KRT, as he has been a contender for overall victories more often than not. That was the case at the last 2020 FIM Motocross World Championship round, the Grand Prix of Garda-Trentino, as he tied on points with Tim Gajser and ended up in second overall. It was a promising season for a lot of reasons, as Febvre states in this MX Vice interview from Pietramurata. It is quite clear that he is in a good place heading into the off-season.

MX Vice: A really good day for you. You were really fast, which has kind of been the story all week. You did not quite get the overall, so are you disappointed to not win the overall or are you just happy that you may have been the fastest guy all week?

Romain Febvre: A little bit of both. I’m happy to finish second and to have a nice battle with Tim [Gajser]. We were clearly the fastest on the circuit today. In the first moto I managed to pass him to win the moto and for sure I wanted to do the same to get the overall, but he got a better start than me. I kind of held his pace a little bit, but he was a little bit faster in the second moto and I even made a mistake at the end. I could not play or pass him. I’m happy to end the season in second overall, anyway, especially after two years of injuries the wintertime or before the end of the season, even. I am happy to be where I am today.

Before we go too far, what the hell were you doing in sector three this week? You were killing everyone there. Sector three was only 25% of the track, yet you were half a second to a second faster than Tim there on most laps. Do you have any idea what you were doing there that was so good?

Yeah. The sector three was the sharp uphill and downhill, so I was really good on the first downhill and the turn there. I had really good traction. It’s where I made the difference today too. It worked in the first moto. I was a little bit faster everywhere. Maybe I was not in sector one, but really that was it. I was quite good in the third sector in the second moto also, but not that much better than Tim. He was just faster in the second moto.

You obviously started the season by missing the first two rounds. Looking at it as a whole though, it has been really good. Really, really good. You missed two rounds and almost got third in the points. I think you were roughly 20 points down at the end. I don’t think there’s anything wrong with what you did in 2020. It’s all really positive.

Yeah. The pace was good, for sure. I had some bad motos, but also like the first GP [at Pietramurata] last Sunday was a mess. Coming here I was 34 points behind [Jeremy] Seewer, who was third and finished second overall. Technically I could have finished second, but it is how it is. I missed the first round and they were gone. For sure, I wanted to go to finish third. I missed the first two rounds though, like you said. To come back like this, it’s been a pretty solid year.

Yeah. The pace was good. The speed was good, for sure. Sometimes we came, like today, at the same points, but ended up second. For sure, we have to learn what we did this year that was good and also analyze the bad points too. We cannot forget that, for sure, so we do not make the same mistake next year. For sure, I am happy to go into the wintertime like this. Especially already knowing the team, so I do not have to learn the bike like last year and everything. We have a pretty good base on the bike already, so now we will go to the winter test next week and see if we can improve that or not. We’ll go back to work next year.

Is there one thing in your mind now that you know you need to fix for next year? Maybe one of the things would be make your starts more consistent? You can get good starts on the Kawasaki; it just doesn’t seem to happen every time.

Yeah, for sure. Even if you start with the holeshot every time, you always have to improve. The others are making progress. It’s like the battle. Not only on the track, but now it’s more about the start. The start is still not everything, for sure, but it gives you the chance to be in a good group and to make the difference in the first few laps. We have to be consistent on that. We know the others will work on that, of course. Those are the rules. You don’t have to stop working on that. We will try to do our best and be stronger next year.