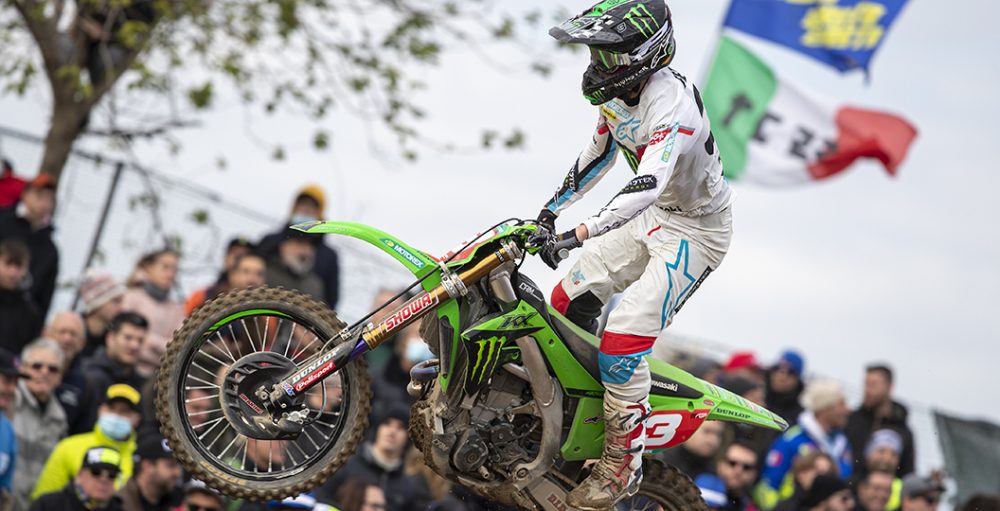 The battle for the MXGP crown in the 2021 FIM Motocross World Championship is going down to the very end! Romain Febvre is three points ahead of Jeffrey Herlings with just a single round to go. There are 50 points on the table. A 1-2 scorecard would be enough for Febvre to win this, quite simply, but beating Herlings around Mantova is not an easy task. There is so much that could happen in the two motos too, with so many spoilers like Jeremy Seewer and Antonio Cairoli in the mix.

Febvre talks about his day at the Grand Prix of Lombardia, plus the upcoming brawl in this exclusive MX Vice interview from Mantova 1. Perhaps the most interesting thing to come from this chat is that Antonio Cairoli gifting Herlings two points at the Grand Prix of Garda is still at the front of his mind. Febvre also discusses his mental strength, plan heading into the grand finale, starts and so much more. A champion is going to be crowned this Wednesday!

MX Vice: A really good day. You lost out on the overall victory again, which kind of sucks. It was a good day for the championship though; you proved how strong and fast you are. A really positive day heading into the final round.

Romain Febvre: It was a really good day for us. First and second, I think it was a good day. It is close and we are on the same points with Jeffrey [Herlings] again. It is a three-point difference now. We will play everything on Wednesday. If I do the same, first and second, then I am happy with that.

This is the thing! It is so close, but you are in a better position. You can just keep doing this, whereas Jeffrey has to go 1-1.

Did you know that Jeffrey had crashed in that first moto? Did they put it on your board? Did you have any idea where Jeffrey was?

I knew he was behind me on the first lap, because I passed him on that first lap. I passed [Jeremy] Seewer on the first lap too. I was leading and knew they were behind. I came to the finish line and could not hear any bikes behind me, so I understood that someone crashed. I did not know. I did not look back – they did not put anything on the board. Some laps after, I had a gap between me and Tim [Gajser]. I just checked it out a little bit and I saw that Jeffrey was not really there. He was not far, but not there. I understood that he crashed and that was it.

I was more impressed with your second moto, because it was a straight-up duel between you and Jeffrey once you finally got around [Jorge] Prado. You proved that you can run his pace and were faster for two or three laps, so that is a good confidence booster.

Yeah, sure! I think the main thing is that Prado was in front for a few laps, like three or four, and he was holding me up too much. Jeffrey was just in front and I could have been directly on his rear wheel there. Maybe I could have tried something? By the time that I passed Prado, he was a little bit gone. I caught him up but I felt the gap was a little bit too big. I’m still happy with that. Wednesday will be different and we will give it everything. I am leading the championship, but I have nothing to lose. We have to be in front of Jeffrey. I will try my best.

Jeffrey had some stuff to say about you cutting him off at the start. I guess he said that he was not a fan of that on television? There is a championship on the line though, so I guess anything goes at this point.

What about [Antonio] Cairoli giving him some points at Arco?

I guess you can play this game over and over.

No, but it is championship time. What can I say? Cairoli gave him some points at Arco.

I have been thinking about this actually. You have always been a good starter, but you are easily the best starter out of the three contenders. Has it always been this way?

It depends on the track. The bike starts pretty good on the sandy tracks like this, but we are not at the same level on hard-pack tracks,. We are starting really well on sandy conditions.

I will leave everything like it is. We only have two days, so it is nothing crazy. We will do a little bit of recovery tomorrow and then check the European classes on Tuesday.

You have got the red plate on your bike. How are you dealing with the pressure and excitement of this situation?

Like normal. It is definitely good to have the red plate on the bike, but I have no pressure with that. I thought I would be a little bit more stressed on the starting gate. Not because of the red plate, just because it is coming closer and closer now. Not at all though. It is good for myself, because I can ride to my full potential. The red plate is looking good, but gold would be even better.

Game on for Wednesday. Whatever it takes, right?