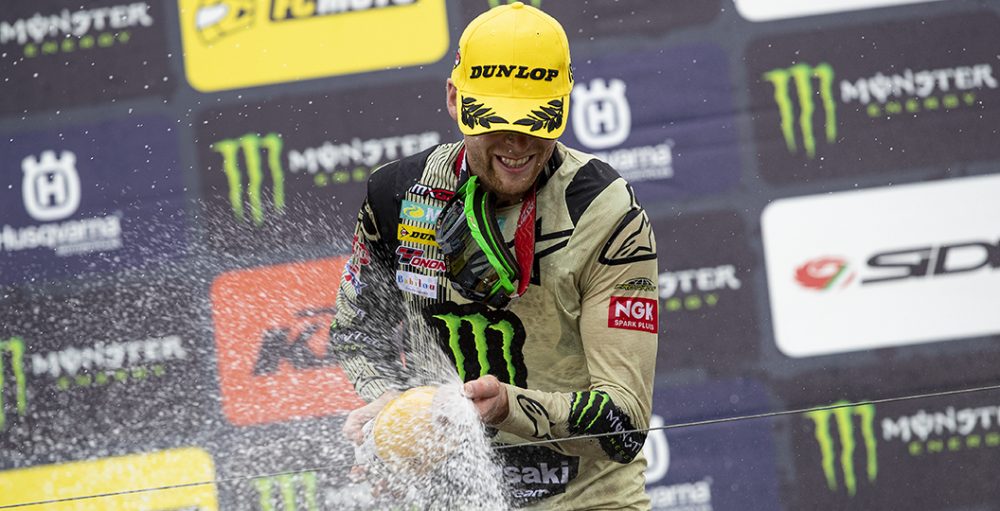 Romain Febvre just became the fifth winner in six rounds of the 2021 FIM Motocross World Championship, after a phenomenal showing at the Grand Prix of Flanders-Belgium. Febvre’s day almost encapsulated his season as a whole – he was incredibly fast and also hindered by mistakes along the way. Those were not enough to stop him from standing atop the podium and turning his career-win total to 15.

Febvre discussed the day in an exclusive MX Vice interview after the race; he also touched on his future. Kawasaki are moving their factory efforts to another team next year, but Febvre’s contract was up anyway and thus he was always going to have to shop around. Reports suggest he has a lucrative offer from Kawasaki to move to the new team, but then he also confirmed that there is another option within the paddock…

MX Vice: Finally, this win has been coming since round one. You have been so fast at every single race. There have been mistakes, but you got the job done today. This must be like a weight has been lifted.

Romain Febvre: Yeah, definitely. It is good to win. More than that, it is winning at Lommel. It means a lot to me. Everybody knows this track as the toughest track of the year and maybe in the world. I am really pleased with my riding today, even with the mistake again. I managed to secure second in the first moto, then I won the second moto even with the mistake. I was really… I was going for it. Finally, I won my first overall of the year.

Were you frustrated that you did not go with Jeffrey in moto one? I am guessing that you were planning another attack in the first race. The crash obviously stopped that from happening.

Yeah, I made some bad laps. I was leading and made some bad laps just before he passed me – he obviously caught me. I felt that he was right there. I made a few mistakes and he passed me. After I just looked back and saw nobody was there, so I tried to make my time and learn from him. That is what I did for like two laps. I even caught him a little bit, but I tipped over and crashed. I was a little bit alone in second place after – I could not do much more. I just secured the second place.

You know how good you are in the sand now. Your speed at Oss was unreal. I am guessing that you were quite confident coming into here.

Yeah, like I said, I have had really good speed on every kind of circuit so far this year. Even in the sand! Maybe even more so in the sand because it is easier to make the difference. Yeah, I was hoping… Every weekend I am hoping. Every weekend we have a good moto and then some crashes or something makes the overall not so good. This weekend was my weekend though.

The winner always loves the track. Most of the riders I have spoken to have had some not nice things to say about the track, like that it is too rough and that the new section was too tight. What did you think of it?

For me, it was like normal Lommel. The track did not change much from last year or in practice, just the first section. It is good that they changed because it is a new track to learn. Yeah, some places were tight. In the second moto, when I was behind the guys, it was tough to pass sometimes. You have so many bumps in the sand, and it is rough, so if you feel good and have good speed then it is good to make the difference. It was rough, for sure, and I feel like it was softer than usual. I do not remember it being that soft at every race that we have done here, but with the weather it was raining on and off. I think it was a good track, whereas Oss was not a good track. It is strange that some riders say that.

You are second in the championship now and really close. You have not been this close in years, so this must be refreshing. You have not had this confidence or momentum in years. Everything is just going in the right direction now.

For sure. It is always nice to be in this position, but the championship has just started. I am not looking at the championship at all. It is good to be in this position, for sure, and not far from the leader. It has only been six races. We have 12 or 14 races to go. We will have at least 10, for sure. We are not even halfway through the championship. I really do not care. I just want to avoid the mistakes that I am still making – I know that I have the speed. I have good conditioning at the moment too. Now, we work pretty good on the starts. Both of us had good starts in both motos. Everything is going in our way, so I am really pleased with that. We have to be good until the end.

How can you get rid of those mistakes? Have you got any ideas or plans? Are you just going too fast?

It is really tough because it is a really small mistake every time. It is not a big crash – I just lose the front or slide from the back. Maybe I am trying too hard sometimes? Mainly it is when I am trying to pass people, but not this weekend. I was alone almost in both motos, even though Jeffrey was just in front in the first moto. I still crashed. I think it is just small things… It is difficult to find out. With the speed that we go, a small mistake that you make can impact a lot. I am trying my best. I cannot figure out why for the moment.

Kawasaki are making changes for next year. Your contract is up anyway, so you were always going to be free. Is it stressful for you? Are you heading in a good direction?

No stress, for sure. That is how it is. We have options and it is going good for me at the moment – I am really pleased. I will try to figure out what is the best for me and go for that. Obviously, no stress. I have a really good agent and I work with him; he is speaking for me and taking care of that situation. I just want to be focused on what is going on now. I know that I can have a good year, so let’s see.