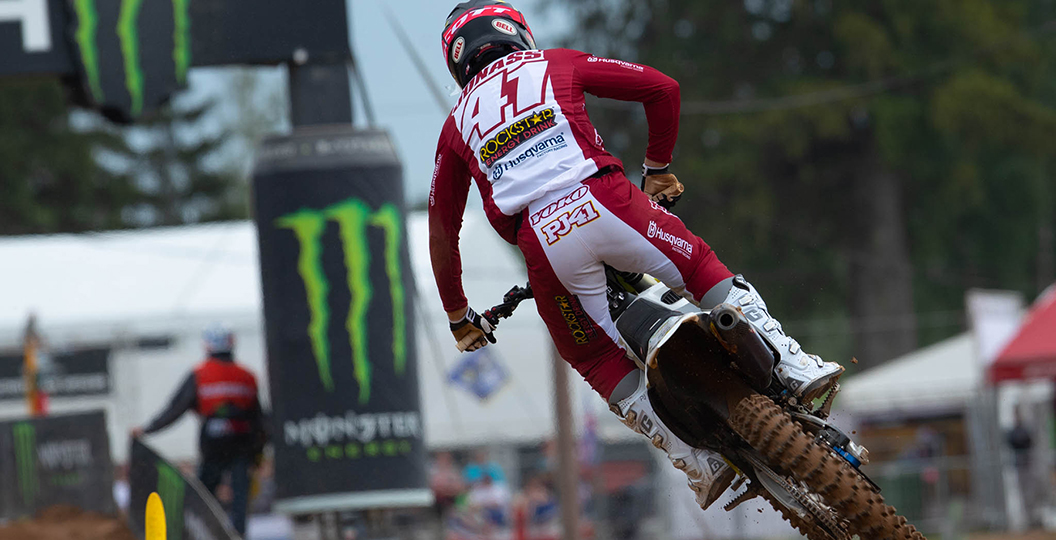 Pauls Jonass is quietly showing flashes of brilliance each week that make him a force to be reckoned with aboard a Rockstar Energy Husqvarna Factory Racing FC 450. The Grand Prix of Latvia, his home race, was another step in the right direction, as he led some laps and showed a lot of hearts. A bloody eye couldn’t stop him, as he explains in this exclusive MX Vice interview.

MX Vice: I cannot really think of anything to ask, because your eye looks seriously bad. How did you get through that? How did it happen? What the hell?

Pauls Jonass: Actually that was quite bad luck. In the first moto I crashed in the first lap, then crashed again on the third lap or something together with one rider. I was feeling quite good, riding quite good and then a few laps to the end I tried to pass Glenn [Coldenhoff] on the jump before the step-up there in the corner. I high-sided a little bit, so I landed and hit my head on the handlebar. Really I was unlucky, because I just hit with the goggles on the kill switch. It just went through and immediately after, a few seconds after, my goggles were full of blood. I had to throw the goggles off in the first half a lap.

I could not see anything. I thought I will need to stop, but somehow I managed to finish the moto. Still got some points. After that I had to go get some stitches. It didn’t feel so bad. It looks bad now. It is just slowly swelling up. It’s getting closer and closer, but it’s alright. Second moto wasn’t so bad. I didn’t get the best start, but I think that was one of the best motos for me this year because I could manage to get good laps and finish sixth. Maybe not the best result but just riding was pretty good. All weekend actually I felt quite good on the bike, so we are moving forward and I’m happy about that.

How good was your vision in the second race? Was it at one hundred percent or was it like riding with an eye patch?

It was not one hundred percent. When I did the sighting lap I was like, “That’s going to be tough.” After a few laps when you get going and the adrenaline is running you just forget about everything and you just go. That’s not too bad.

The qualifying race yesterday was big. A big moment for you as well, leading laps for the first time. I’m guessing you pumped up pretty good, but still it is good to get up there.

Yeah, sure. It was really cool leading for the first time in MXGP class, especially at home. Was something special. When I passed Jeffrey [Herlings] and I was first on the jump like, “What’s going to happen now? But then I tried to stay calm. I felt actually really good. I just got a little arm pump and then the long waves section was so difficult that I struggled through there. I completely lost it and got such bad arm pump, then struggled through the whole moto. I still managed to finish sixth. Not the best qualifying race, but at least I led for some laps. That was quite awesome.

Yeah, sure. Actually the first time was in the Dutch championship in Rhenen, which was the first race back for Jeffrey. It was nice to be alongside him on the gate. I actually managed to pass him in the first race also. I was like, “Yeah!” That’s on the checklist. After the qualifying race yesterday when I got the papers that said I had the fastest lap time of the race I was like, “Okay. This I’m going to put at home in a frame.” It’s just positive things. Of course the eye is now looking pretty bad, but I try to stay positive. It was so awesome to feel the crowd all around the track. It was really cool. I actually think this was the year when the support was the biggest, even compared to the races that I led here with the 250s.

Once you got up front in that qualifying race yesterday, did the pace surprise you? Obviously that is the first time you have actually battled for the lead. Was it faster than you expected? Slower? Did you get up there and go, “Actually, I can do this? This is pretty normal for me?”

Yeah. I was not surprised. Like you said, I was like, “Okay, that feels quite normal.” I did a few laps by Jeffrey and then I pulled a three-second gap and then I was like, “Okay, that is not so bad.” I was feeling good. Like I said, I start to feel better and better on the 450 and with the Husky and everything. The team works so hard. They try to do the best every time, improve the bike and just to make me feel better and more comfortable.

Finally I am starting to feel that the feeling I had with the 250 is coming back a little bit. I can do whatever I want with the bike, so that is really important. Especially leading the laps, then you can ride your own lines. Just the speed is nothing crazy, but it’s still super fast. I just need to get going, manage to stay some races maybe a few laps more and more and more until I can do it for thirty-five minutes.

Obviously you have had two seconds in this class. You have led laps. Are we starting to look at the number one spot and thinking, “I like the look of that?”

Yeah, sure. That’s always the goal, but we need to stay realistic and we need to stay calm. The season is still long. We are only halfway through. You see there are so many injuries lately, so the guys are going out and the season is long. I just need to stay calm and go step-by-step just to get more confident and quicker and stronger. Hopefully we can make a few more podiums by the end of the year.

What did you think of the track prep this weekend? Obviously the MX2 guys go before you and a few of those guys have said that they flattened it too much, so it was like a speedway. By the time it got to your motos, was it rough enough or did you still feel like it could have been left?

I think they flat it too much. For sure they had to flat the long waves section, because that was difficult and dangerous. For the rest of the track though, I think the track in the qualifying race was better because it was more technical. It was more rough. They didn’t have the time to fix the track too much. That’s really motocross. It’s not a speedway, so you need to really think about the bumps to wheelie or maybe jump in some places. That is real motocross.

Sometimes they need to leave the track more flat. For sure for us in MXGP the track is not that flat as MX2, but that is a thing that I hated a lot when I was still in MX2. They flat the track completely for the second moto. That was awful. Now I see they do it again many times. They just need to flat some takeoffs and the whoops section, then leave the track like it is.

Are you finally at one hundred percent now or are you still maybe a bit off? Obviously, ignoring the eye.

No, I think I am not even close to one hundred percent. We still have a lot of work to do. Like I said, I’m just now starting to feel comfortable on the big bike. I would say I’m around ninety percent. Still there is a long way to go. Those last percents are the toughest ones, so it will take some time. It will be a tough way to get to the top.