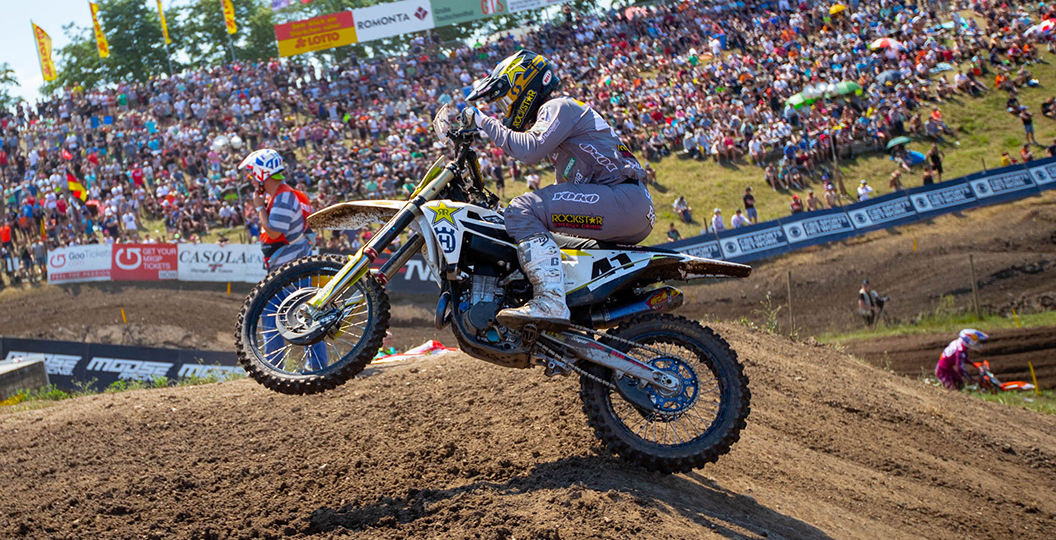 Pauls Jonass kept plenty of fans entertained at the Grand Prix of Germany over the weekend. Social media went crazy on day one, for instance, after he survived a front flip, then he kept Tim Gajser on his toes in moto two. It was another eventful outing for the Rockstar Energy Husqvarna Factory Racing rider, but he recapped everything that happened in the form of an exclusive MX Vice interview.

MX Vice: A pretty solid weekend that ended on a really good note and you survived a front flip, so that was good!

Pauls Jonass: Yeah, I think the first positive thing is that I survived the front flip. That was a really high-speed crash! Luckily nothing really bad happened. I just hit my leg muscle, but for the rest I was fine. Today, for sure, we ended up in a good note with a second place in the second moto but, unfortunately, we missed the podium by one point on the last lap. In the first moto I got a pretty decent start, but on the first laps I tried to ride too aggressive and made too many mistakes. I got arm pump, then it took me a while to get going again.

In the last laps I put some pretty decent laps in, the lap times, but it was just way too late. That was only the last ten minutes, but in the second moto I got a great start. I was straightaway behind [Tim] Gajser. I could follow him for some time to learn some lines and just learn some tricks behind him, because he is really fast in those tracks. I managed to pull the gap to third place, which was really positive. It finally felt like back in the MX2 days where I could just ride my own race, which was pretty cool.

When you were following Gajser, was there one big thing that you learned? Was there a line that he was using that you didn’t even think of or anything like that?

No, I think it was not really something crazy. He was taking more or less the lines that I was taking before. He was just hitting them a bit harder and just way faster, then, when I was behind him, I could also manage to get the flow and stay close. I also hit the lines harder and also got faster overall.

I guess that second moto just proves that, in the crazy MXGP class, you just need a start. If you get a good start, you can run the pace and maybe win one of these things. With a bad start, however, it is really hard to come through.

Yeah, for sure. The start is really the key, because you see how tight the pack is. When you go in the finish line there are five or six riders within ten seconds. That is pretty crazy. The start is really key, especially on a track like this. Maybe when we go to Lommel then it is not so important, because there are really many places to pass and it is really heavy physically, but in tracks like this it is really important to get a decent start. I think I proved that in the second race. It was pretty good for my confidence that I could prove that I have the speed and the fitness to run up front for thirty minutes.

Speaking of tracks like this, a lot of riders have been talking about track prep lately. What did you think of it? What do you think of it this season as a whole? I was surprised they ripped the entire track last night.

I think actually the track was really good this weekend. It was rough. It was technical. It was maybe dangerous in some places, but it was good because before all the season they flat way too much. The tracks were literally like road racing sometimes. This track was really technical and really rutty though, which brings the speed down and I think separates the riders a bit more. It’s dangerous with the crashes and stuff like that, of course, but we are racing motocross. We are not road-racing guys or speedway guys. We need bumps. We need ruts and big jumps also.

When people are blaming tracks for all of the injuries that we are seeing, you do not really believe that at all?

Is the eye all good now and at one hundred percent? You have obviously got nasty stitches, but is it good?

Yeah, the eye is good. After the first moto they stitched it directly. It was alright for the second moto, but I could not see properly. They put the tape on, which was covering half my eye, so that was a bit difficult. Now it is all good. It does not bother me, so I can do everything what I want.

Finally, just talk us through the front flip. Was the video worse than what you thought it was? How did it happen? How did you style it out?

The video actually looked pretty nice. I was watching it and I was like, “Maybe I need to go to gymnastics?” It was a pretty nice flip, but in the real life it happened so fast that I didn’t even know how I ended up like that. The bike was so bent. Luckily, nothing bad happened. I am still on two feet and without broken bones.