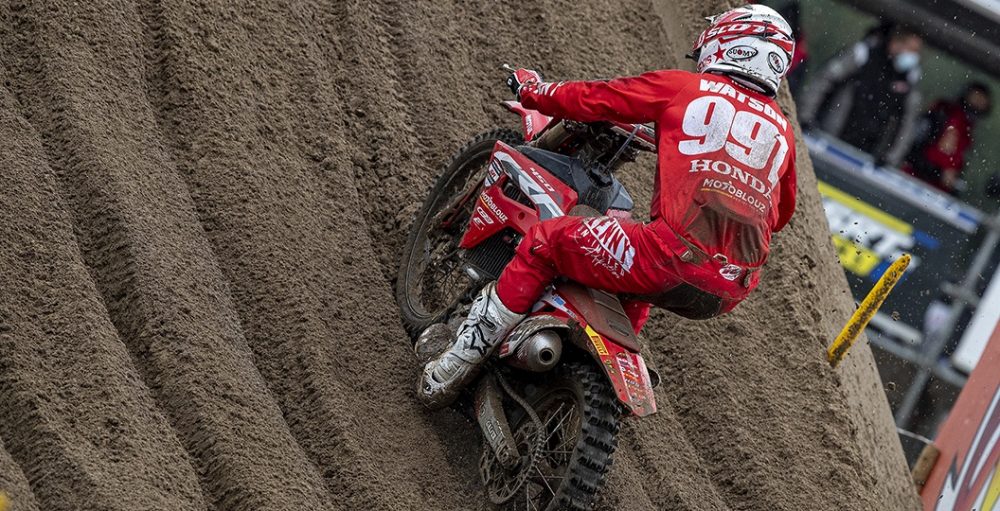 Nathan Watson has not appeared at a round of the FIM Motocross World Championship in more than five years, almost unbelievably, but made his return to the highest level at the Grand Prix of Lommel over the weekend. An impressive eleventh in the first moto was enough proof that he belongs on the world stage! There is potential for Watson to make more wildcard appearances next year, as he discusses in this exclusive MX Vice interview from Lommel 3.

MX Vice: I guess we need to do things a bit differently. You are actually here, firstly, which is different. How have you actually ended up racing in MXGP again for the first time in years?

Nathan Watson: This is my first time back at an MXGP round since Assen in 2015, so it has been a while and I am a bit rusty on the starts and all that. I was basically supposed to have the first French beach race today and it got cancelled, unfortunately. I just wanted to race! I’ve done nothing all year, literally. I’ve done Le Touquet and one race since, so two or three races all year. I just wanted to race. The team said, “Do you want to come and do Lommel?” I said, “Yeah, why not?” I’ve been riding. I’ve been staying with Ben [Watson] and riding pretty good in the sand, but unfortunately today it absolutely lashed it down. It was like rutty, boggy horribleness. I did not enjoy it, to be honest. Amazing day, obviously, because Ben got the win and I am so happy for him. That just made the day. For me personally, it was alright.

I was eleventh or something in qualifying, which is alright. I messed up my fast lap. I could have been much better, but everyone could say that. The first race was alright. I got an okay start and finished eleventh quite close to [Clement] Desalle. I was happy with that. We are just kind of doing it for testing, a bit of training, getting the bike set-up and stuff. We were always learning. We are not really ready at all. In the last one I watched Ben on the podium and I was all hyped up, then I got a bit carried away in the waves and had a massive crash. I hurt myself and winded myself a little bit – shook myself up a bit. I was just struggling after that. I was just struggling with the track and the bike a little bit. I just wanted to bring it home and focus on my goal, which is the beach races. It’s been a fun day though. It’s been nice to be back.

Did racing at the ‘Nations last year help you at all today? Did that help with the rust at all or is the MXoN just this special thing that really does not apply to a normal race?

Nothing compares to the ‘Nations. Obviously, all the people were actually allowed to be there. The ‘Nations and the atmosphere was mad. Extra pressure, which I think helps you. Here today it’s been strange, because it’s my first event with no spectators. It was strange. I felt pretty relaxed. I seem to just bring the rain with me wherever I go though! Wet, boggy and very similar [to Assen]. To be honest, I do not like it. I prefer it when it’s dry. Everyone will be saying that. It’s pretty unique, that stuff out there. It’s the same for everyone. It was an alright day.

I think you were the only person who got better with each lap that went by. Did the intensity shock you at all? You knew what to expect, obviously, but was it maybe higher than you presumed?

Yeah. I’ve been used to really long races for the last few years, beach races and enduro races. I’ve never had to go flat out from the get-go. That’s what was difficult for me, the intensity and obviously in the first few corners and laps you have got to sprint. That was difficult. I got a bit better and a bit more comfortable as each session went on. Just a day out to test and train. It’s been pretty cool.

I hear you went the wrong way with bike settings in the second moto as well?

Yeah. We just wanted to try some stuff to learn and test. We changed the bike quite a bit, because I was actually struggling a little bit in the first race. I rode pretty good in the second one. I just went the wrong way and was struggling so bad. I was on the struggle bus. We’ll learn from it. We know we went the wrong way, so next week at the test track we’ll go the other way. It’s all training for Le Touquet.

I think there is one problem with you actually showing up today. We all know you have missed MXGP – it is no secret that you did not really enjoy dodging trees. I feel like you doing today probably has put the bit between your teeth again and missing MXGP rounds isn’t exactly going to sit too well with you now?

Yeah. It’s been so nice to be back here. Everyone knows I’ve been wanting to come back here for a while now. Let’s see what happens next year. I’ve got Le Touquet in the middle of January and a contract with this team until September. Hopefully they’ll let me come and do some more GPs. Let’s see.

Well, I need to talk to you about that. You are going to be at some races, aren’t you? We don’t really know but you will be at some, surely? What are you going to do otherwise, just sit around?

That’s the plan. If everything is going good and I’m riding good, and if the team are up for it, then I’m up for it. I certainly will be. I want to go racing for sure. I want to be back here and racing Ben.

Speaking of Ben, you kind of hinted at this. When I realised that Ben was safe and going to win the overall, the very first thing I thought of was how it was going to screw you. I’m guessing, like you said, you got caught up in the moment a little bit and it was all about Ben, instead of thinking about your own race.

I was more nervous on those last two laps of Ben’s race than I was on the start line for my own race [laughs]!

Did you feel like the job was done once he won the overall?

It was just such a nice moment. I was just there at the finish line – he came straight up to me. It was cool. So happy for him. I had to go and race myself though, so I had to calm down.

Actually, you can vouch for this. Everyone knows I’m a Ben believer. You are obviously a Ben believer too. I would hope you are anyway! This has been coming a while and it’s finally happened. This could have happened two years ago quite easily though, huh?

Yeah, definitely. We have all seen his potential and speed. He’s shown it every now and again. It was just putting the pieces together and making it happen. It just seems to have clicked here in Lommel, I think, and obviously he likes the track. He did not even like the track today actually – he said the track was sh*t to me this morning. He’s getting decent starts and been consistent too. I think he is believing in himself and knows he can do it now. I think now he has kind of got the ball rolling he’ll take some stopping, to be fair. Hopefully he can keep it up for the last three races and get something really good sorted for next year [Ed. Note: Ben has since signed a deal with Monster Energy Yamaha Factory MXGP]. I think he is going to be good on a 450 as well – I’ve seen him ride a 450.