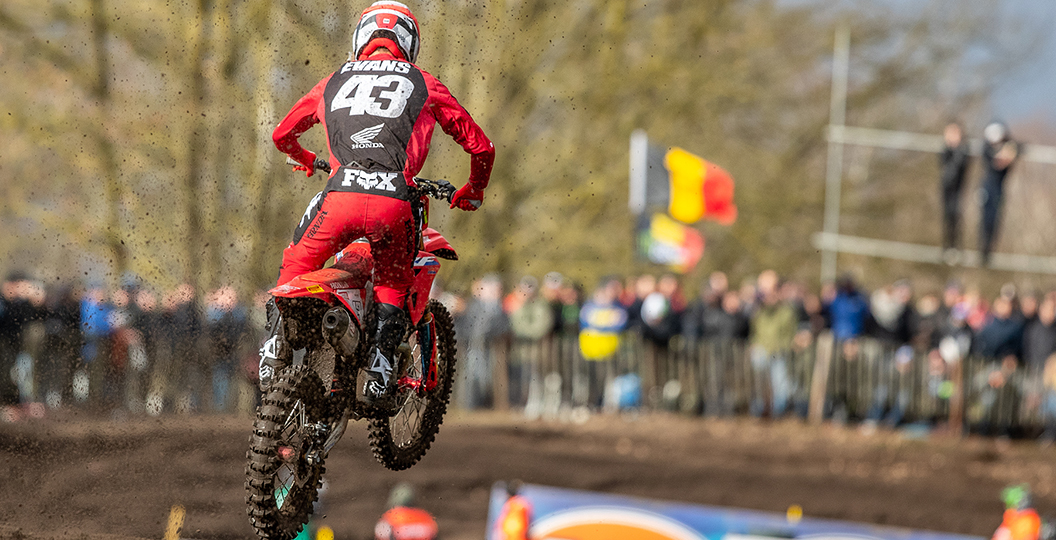 The momentum that Mitch Evans has gathered in recent weeks came screeching to a halt at the second round of the 2020 FIM Motocross World Championship, the Grand Prix of The Netherlands, over the weekend, as he fell and dislocated his shoulder in moto one. What is the status on the issue? Evans stuck around on Sunday evening for this MX Vice post-race interview. This interview was originally posted as a podcast elsewhere on the site.

MX Vice: Honestly, I have no clue what happened today. You are missing an arm [in the sleeve], which I am going to guess is not a good sign.

Mitch Evans: Yes, definitely not mate. Came together with two riders on the first lap of moto one and went down and put my shoulder out. Pretty shitty weekend, but it is what it is.

I guess it is early, so you maybe do not know yet, but popping your shoulder out can sometimes be simple or really complicated depending on ligament damage and all of that. Too early to tell that or do you have any idea?

It is the first time it has ever happened to me. We got it checked out and it is going to have to be full reco, so we do not know whether we’ll be back.

Back for this season?

Wait, a minute ago you said you would be back for round five. Can we clarify this?

I’m just sh*tting with you.

I was going to say… It is a dislocated shoulder. Most guys here would be back within a couple of weeks. I didn’t know if you wanted to play on it that much.

X-ray was all good and my tendons look all good, so we are going to get an MRI done in a week’s time or something and see how that is. We will make a plan from there. Everything looked all good, yeah, so it should be good. We aim to be back for Spain.

Super pissed off or are you taking it pretty well?

I do bring positivity to the party, as you know from last week, so your speed was good before the crash. I think you kind of proved to people that everything up until now was not a fluke, because obviously this is proper sand. Everyone is there, and you were pretty solid.

Yeah. I found this weekend my sprint speed for qualifying in the sand isn’t that good. I think just this weekend… I’ve never ridden in anything like this in Australia, or even over here. My sprint speed was not that good, but I found out yesterday in the qualifying race that my race speed was good. I was happy with that. With the way the track was and the conditions, I’ve never really ridden in it. The plan was just to go out this weekend and get through. That probably bit me in the ass by trying to be a little bit too conservative, and that’s maybe why I crashed.

That is the thing. You even swerved Lommel last year. Valkenswaard was harder. You have not actually done a true sand race yet, I guess. This is a first-time thing.

Yeah, exactly. I didn’t even make it through! It’s a little bit frustrating, because it wasn’t anyone’s fault. It is what it is.

You reckon you will be back for Spain. How long do you think you are going to miss off the bike? Is it a couple of weeks, or is it going to be a case of hop on once and then turn up in Spain?

Honestly, I do not know. The doctors here told me two to three weeks. Once we get all the MRIs done and we check it out, then we’ll see how it goes. Our plan isn’t to come back underprepared. Our plan is to come back at one hundred percent. We have got a long season and my speed is good, so I don’t want to come back at eighty percent and then make it worse. The team is being very good with that. Thankful for them being understanding and not wanting me back until I’m one hundred percent.