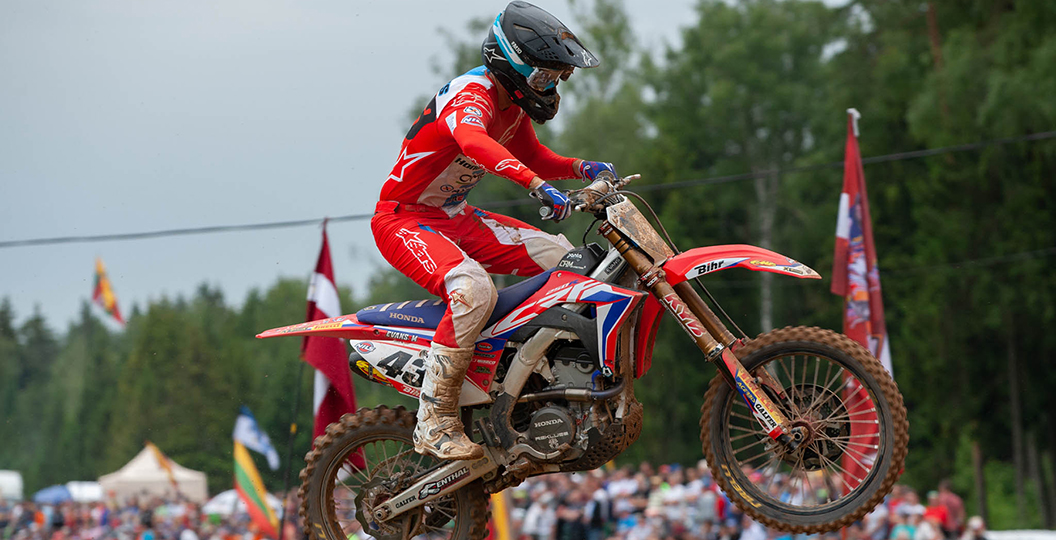 Mitch Evans was really trending upwards, but hit a bump in the road at the Grand Prix of Latvia and slipped to seventh in the series standings. The good news is that no significant injuries were suffered, so he will be fighting fit again at the upcoming round in Germany. What actually went down in his first trip to Kegums? Evans broke it all down in this entertaining post-race chat.

Mitch Evans: Yeah. Dad keeps telling me the same thing. The track was tough today, but the crash on Saturday was probably in one of the safest or slowest parts of the track and I just made a little mistake. Didn’t get my foot back on and jumped too far the rut and ended up hitting the ground pretty hard. Then I actually had a bit of concussion from that crash. The crash today was just not with it mentally. Just slow decisions. Front started tucking and then by the time I realized what was going on, I was already on the ground. It is what it is. Happy that I didn’t get any injuries or make my injuries worse today.

When I saw you down on the start straight I presumed that your back-end had kicked out, you had hit like the solid bank and then high-sided. It wasn’t that?

That was it. I jumped too far to the right. Didn’t get my foot back on, so when I hit the bank I seat-bounced it so it kicked me back sideways even harder. Then I full hit chest on the bar pads and then done a backflip. Landed straight on my shoulder and head. I was lying there just seeing stars. My whole arm was numb and I thought, “Great. This ain’t good.” I struggled to pick up the bike and whatnot. Went straight back to the pit.  You know when you get punched in the arm really hard? That’s what it felt like.

I saw you get up, pick the bike up, you sat on it and then you went to pull away and I don’t know what you did. I was like, “Who is this guy? What have we got here?”

You said you had a bit of a concussion. Before everyone starts getting a bit aggressive and crazy, you obviously got cleared to race today.

Yeah. It wasn’t bad. I remembered the whole crash and whatnot. It was just I was seeing stars. I did everything that I could last night. I felt good in the warm up this morning and whatnot. I knew that I was a little bit off, just making slow decisions. I would hit a braking bump and go, “Oh, I didn’t see that one.” Our goal today was two top tens, but just to make sure that I didn’t make the injuries any worse or get a new one. We achieved that in moto one but moto two didn’t go to plan, but it is what it is.

Every MX2 rider I have spoken to said the track was flattened too much before your motos today. I’m guessing you feel the same way?

No. Honestly, I disagree with that. I think they did a good job of what they fixed today. They fixed the parts that were dangerous like the up ramps and the rollers, but they left the rest of the track, all the corners and braking bumps really rough. The parts that were dangerous were all the ruts up the up ramps. We have seen a lot of crashes from them. Probably the best weekend so far with the track prep I feel like was this weekend. In other rounds I feel like they flattened it too much and then it just becomes one-lined when there are starting to get lines. WIth the sandy base here, they would flatten it and then halfway through the moto it was back to what it was already.

Well, did you talk to anyone last weekend?

I wasn’t there last weekend. Thanks for noticing.

I did notice you guys weren’t there. Last weekend was even worse. It just started to get rough and then they would flatten it and then it would just become one line again. This weekend, I don’t know. Maybe I hit my head harder than I thought. I thought it was rougher and there were more passing options today too than last weekend.

It was a sand track, so I think that might have helped.

Well, exactly. That’s what I mean. What are they complaining about?

I don’t care. They can do what they want.

We will kick you out. We will gang up on you.

I already feel that. Youthstream are going to do what they want to do. There were a lot of crashes last weekend and a lot of crashes this weekend. A lot of people getting hurt, so whether they fix it too much or not… Everyone is going to have a different opinion on it anyway. That’s my take on it.

Obviously you are banged up again. Kind of like the first four rounds or whatever. Are you going to be at one hundred percent for Germany or is this going to linger a little bit?

Honestly, today my shoulder wasn’t an issue. It’s sore now when I do nothing, but when I was riding I didn’t have a problem with it. The only other problem was just my concussion. My thumb is still sore so I have got no idea what’s going on there. I’m getting an MRI on Wednesday to see what’s going on. I think the shoulder is not a problem and just as long as I take care of my concussion, make sure I stay off the phone, stay off the TV and sleep in a dark room we’ll be good.