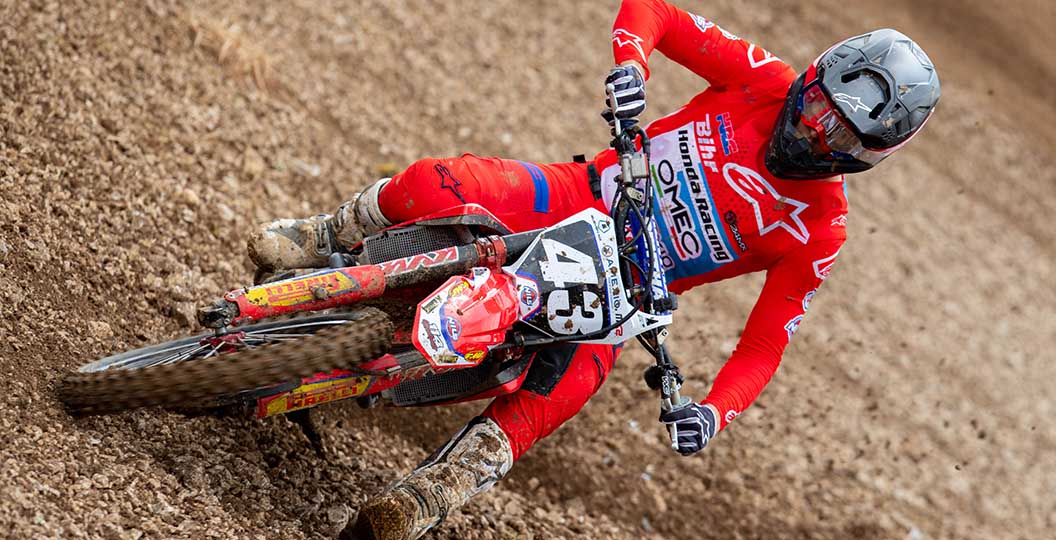 Mitch Evans continues to surprise and impress in the 2019 FIM Motocross World Championship. Evans jumped up the leaderboard yet again this past weekend and set lap times that attracted the interest of everyone in attendance, but what is next? It really seems as though he is on the verge of a win. Lewis Phillips caught up with Evans after the race to discuss his rapid progress, next season and so much more.

MX Vice: It was a good day, because there were lots of good things, but the results didn’t quite add up and it wasn’t what you wanted. There were good things though, so I think it’s positive.

Mitch Evans: Absolutely. It was a positive weekend. I’m really happy with my speed and my riding. Just struggled both motos getting off the gate. I spun up both motos and was way back off the start. First moto was way worse. I was like last and came back to seventh, so I was happy to make as many passes as I did. Moto two wasn’t quite as bad start, but I made my way to fifth quite early before the finish line. I made my way into fourth and tried to get [Ben] Watson there for a while, but I just used too much energy. Wasn’t being smart.

Just making a lot of mistakes and used a lot of energy and ended up throwing the anchor out again. First moto was the first moto all year I’ve been able to push the whole way through, so I can feel my fitness improving again. A very positive weekend here. Qualifying and timed practice was really good for me this weekend. P3, that is the best one this year. I was even P1 for a while there. Otherwise I’m normally like fifteenth, so it is good.

I don’t know if you know this, but there was like four or five laps in that second moto where you were the fastest guy on track by six or seven tenths. Sometimes it was a full second. Hearing that now, does that bum you out a bit that you couldn’t push it further or are you just happy with that stat?

The boys told me that I had the fastest lap of the race, but I knew towards the middle there I’d gauge [Jorge] Prado and Jago [Geerts] every time in certain spots on the track. I could see that I was catching them, so I knew I just needed to get around Ben as soon as I could, but just couldn’t make the pass happen. Otherwise, pretty happy. I know now if I’m with them off the start I know I can win for sure. I don’t have to worry about using so much energy trying to get around guys at the beginning. If I can just do my own thing and get into a flow early I know I can challenge for the win.

What do you think would have happened if you had passed Ben straight off? Say, the first attempt you made you went gone straight by. Do you reckon you would have been able to make a bit of a run?

Yeah. I believe I reckon I would have been able to at least catch up to the back of Geerts and tried to make a pass as well. I would have liked to have done that, but it is what it is.

Talking about this now, obviously we are seven rounds in and you are talking about winning races, are you surprised that you are able to say that? Coming in you obviously had expectations, but I cannot imagine you would have expected this.

Yes and no. Our expectations at the start of the year were to just be top five every round, but once you start getting that feeling of believing that you are one of the front guys you end up not being happy with fourth overall anymore. Especially after how well I did in timed practice and I finished fourth in qualifying race, I wasn’t happy with that because I didn’t feel as good as what I was in the timed practice.

Today as well, we have made big improvements. Honestly, I believe if my fitness was where it was during the winter for these first couple of rounds they would have been a lot better. I’m starting to get back to where I was in the winter, which has given me a lot of confidence too. Now I believe I am one of the top guys, so that’s a huge help.

Obviously at this point everyone wants to talk about next year, contracts and all of that. People ask me what I know. All I say is that the one thing I’m pretty sure about is that every team in the paddock is going to reverse a truck full of solid gold bars up to your house and just be like, “Take it. Come ride for us.” You are twenty, so you have got time in MX2. You were on a 450F last year. You can do that. If I was a team manager, that is what I’m doing. Have you heard things? Is that in full swing for you?

I thought that question was going to be amazing, but I guess not. Still that’s good, because next year you should be up there.

Exactly. The plan was this year to be a learning year and then next year we go for the championship.