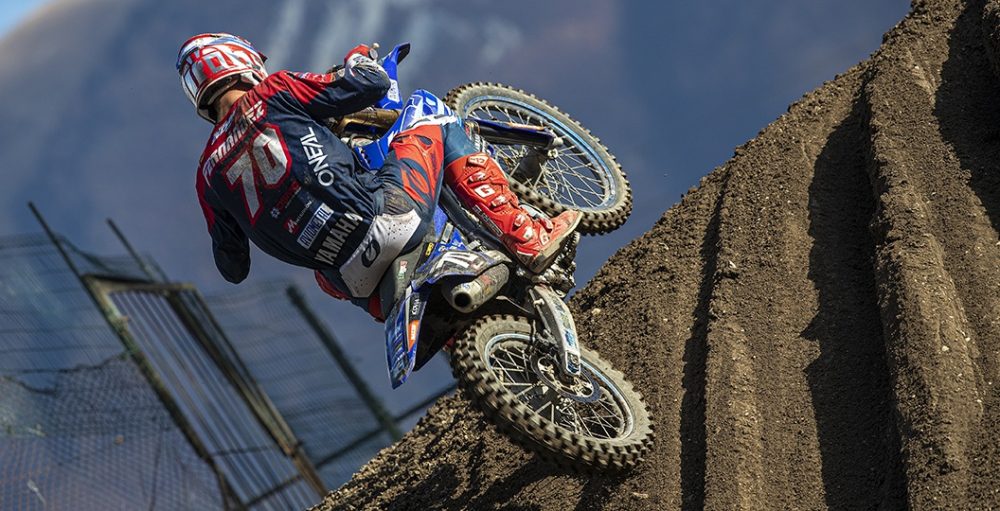 Honda 114 Motorsports shocked the world just over a week ago, as they announced that Joel Rizzi will fill their second MX2 seat and sit alongside Ruben Fernandez. Livia Lancelot explains why Rizzi was handed a two-year contract (with an option for a third term) in this exclusive MX Vice interview, as well as touching on the previous season with her Australian duo.

MX Vice: Let’s kick things off with the 2020 season. I feel like the best way to sum it up is that both Nathan [Crawford] and Bailey [Malkiewicz] both showed a lot of potential at points, but it just never really came together consistently as far as results are concerned.

Livia Lancelot: Oh, exactly. The potential was really good, like you said, and what we saw during the winter was definitely encouraging. It never really turned into something great though. Unfortunately for Bailey, he had a problem with his ACL from the first pre-season race at Mantova. That killed his chances of doing something. We all know that doing a full year without an ACL is almost impossible. This didn’t help. For Nathan, there was a lot of bad luck. When he came back after lockdown, he was not as… I would not say motivated, but he was not as strong as he was before. He started to give up on his hopes and stopped believing. This is a tough sport, as we know, and if you are not fully there mentally then it isn’t going to happen. It could have been something good, but it didn’t happen. It’s like that. You cannot win every year! We tried with two new riders, but they did not finish where they were supposed to.

Nathan is too old for MX2 now, but were you close to keeping Bailey? Were you in talks with him about next year at any point?

We asked Bailey to show us something, and show that he’d fight during the week with the fitness programme and way that he was coming to the races. It did not really happen, you know. There were some good starts and he could keep the pace for a few laps, but it was not where he was supposed to be. Maybe he needs a different team or trainer around him? Maybe we did not find the recipe to make him great? Instead of keep trying to push and ending with a bad relationship, because it can be like that, I preferred to go in a different way. Bailey is young and he needs to understand that you need to work hard to be there in the top five. I don’t think he understands it as well as [Tom] Vialle, [Jago] Geerts or those guys at the moment.

This year was the third for the team in MX2. Is this where you thought you would be after three years, as far as results and support goes? Are you happy with the journey so far?

Yeah, it is pretty hard. We started really high already. The first discussion that I had with Honda and Giacomo [Gariboldi] was to build an EMX250 team, then within a few months it turned into an MX2 team that would go for top-ten finishes. We ended up being an MX2 team going for the world title with Hunter Lawrence! It already improved rapidly in a couple of months – that should have taken a couple of years. I cannot really expect to keep improving as fast as that. We started our very first Grand Prix with a podium. I definitely want more and to keep improving though.

I want the team to keep growing up too, with the level of the riders and the budget. I have to be honest with myself though and realise that I already started high. I’m happy with the set-up and results that we have had. We did not podium this season – we did not even finish in the top five! I still learnt a lot from my riders though. I’m happy about the season and where I am. I am pretty sure we can keep on improving too. I want to be better and fight for a world title one day, but I know that this takes time.

You have Ruben Fernandez for 2021. I feel like he will really benefit from leaning on the experience that you and Eric Sorby have. I think that will take him into the top five, which I guess is what you want?

Yeah, for sure. I am really happy that we managed to make it happen with Ruben. I think that what you said made him sign with the team, because we were not the only ones who wanted him for next year. We explained to him that Eric and I are there, and we have a full organisation to make the riders as happy as possible in their mind. They only have to think about riding and doing their programme – we also have a fitness trainer. We have everything to make them feel good. I think that all of these things can help Ruben finish on the podium.

You have Joel Rizzi too, which is a surprise to just about everyone. Where did that come from? Was that a Honda suggestion?

I am always following everyone with their results in Europe, Australia and everywhere. I follow where they have come from and even their times in practice. Everything! Joel was always somewhere on my list, because he is just a little bit older than Axel [Louis]. We knew that he was a little bit better than Axel, for example, because he already had some good motos in Latvia. They are almost the same age. I was following him, then Giacomo was in contact with Jamie Dobb and asked if I knew him. Giacomo did not really know, because he does not have as much time to follow the EMX250 stuff, so this is where it came from. We started to talk about him.

We were thinking about giving him one more year in EMX250 to begin with, but we were also trying to find a second rider for MX2. When you look at the level in EMX250, with the results that [Thibault] Benistant and [Mattia] Guadagnini did in MX2, you can see that a kid who is doing top ten in EMX250 can already jump into MX2. We started to talk about it with Jamie and thought that him doing one year in MX2 with no pressure or expectations would be really good for 2022. This is why he will be in MX2 next year, to learn as much as possible about overseas and all of the tracks. I think it is going to be really good for 2022.

It is funny. I guess this is almost what the team was created for in the first place, to take a young talent and nurture him to make him into a rider who can represent Honda well.

Yeah, exactly. That is the goal and what we did with Mitch [Evans]. It was different with Hunter [Lawrence], because we already knew about his deal with GEICO. Mitch was supposed to do three years with us, before jumping onto the 450F, but he was so good that they kind of stole him from me [laughs]. This is what we want to do. We will give Rizzi one year to learn before expecting results in 2022, then maybe he can fight for a world title in 2023 or 2024? He is really young. It will also give Honda time to trust us more and maybe give us a factory bike. You never know, but this is why we want to work with young riders.