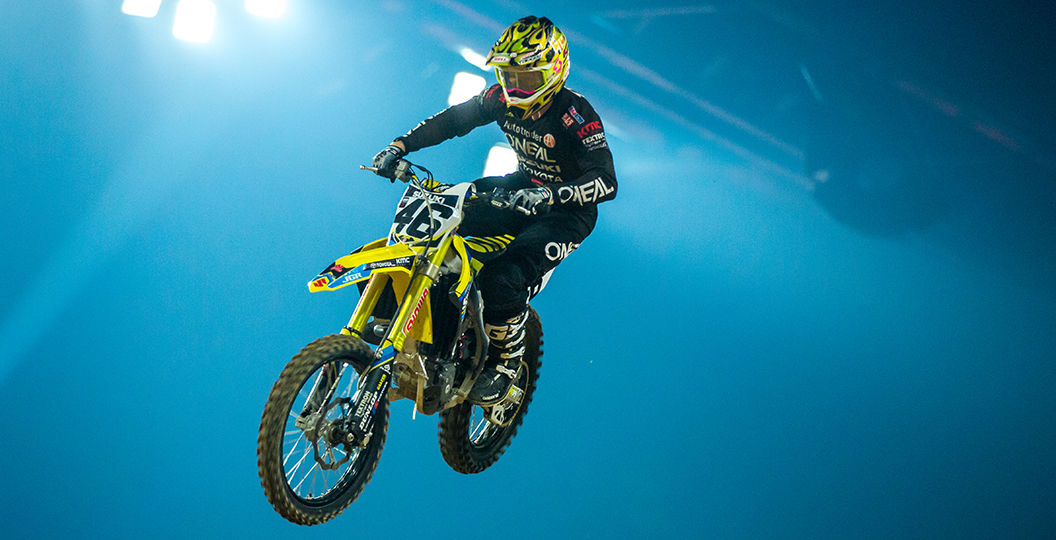 When perusing the results from Paris, it would be easy to presume that Justin Hill had a difficult weekend and struggled on the tight circuit. The way that he performed in practice and the Superpole event gave a very different impression though. Why was it such a struggle to convert that into race results? Hill explains what his situation was in this exclusive interview from the race.

MX Vice: If we are going to judge it just on your speed then it was an amazing weekend, but obviously that didn’t really come across in the races. Just kind of wrap it up.

Justin Hill: Yeah. I had good speed, like you said, but just starts and tight track and being buried, that kind of thing. I had a lot of fun. I love Paris. I love France. I love this type of event. It was very relaxed and fun. Unfortunately, I crashed pretty hard and got kind of banged up. It was just one of those maintain the rest of the weekend and don’t come back in a box and just make sure we are good. I did exactly what I wanted. I wanted to show up and just prove that I could have the speed and on a stock engine too. All the things that were missing from the programme… Just show I can be faster. I’m happy.

Break down your bike a little bit more. I guess you brought suspension and stuff like that over, but it was a stock engine. Were there any sketchy moments where you forgot that your bike was a lot slower than normal?

Honestly, yeah, because you get into a zone and when you are in the zone at home you are used to every little thing about your bike… You are one with your machine after a little while. I was coming through the rhythms and not quite hitting it like maybe as hard as I have to on this engine. A couple times, yeah. I was like, “I got to goose it here and make it happen.” It was just for me a fantastic learning experience. We knew we were going to race about ten hours before we flew out, so next year I would love to come back with the full set-up and use it as a test.

Your starts kind of killed you. Did that come down to the stock engine or was there something else going on there?

It did. Honestly, we are kind of far from our season and I didn’t expect to be racing. I haven’t really been on the gate much. I just kind of winged it and also this grate is a little different too, so just a couple little things. I just wasn’t prepared for it. Last minute. We came. It was fun. Next year I want to come back, full set-up and I want to be the King of Paris. It just didn’t work out.

You touched on it a little bit there, but just sum up how you ended up here. Obviously, it was all last minute and I guess there was a lot of rushing around.

Yeah. The unfortunate thing about our sport is people do get hurt. Marvin [Musquin] got hurt. [Eric] Peronnard had called me early on about coming and I normally kind of go, “Eh” about the overseas, just because I’m always so hard at work at home and getting ready. Ordinarily I’m not really into it. This particular time it was almost like perfect timing though, because in Carolina we had rain and rain and rain. We didn’t really get the chance to ride at home, so he called me. He was like, “Hey, you want to come?” I was like, “Okay.” It’s either go and race and get some gate time or sit around for seven more days. It will still be raining when I get home, but hopefully not for too much longer.

Since you have started preparing for the new season I guess you spent a lot of time in Carolina, which is obviously east coast with softer tracks. Have you spent any time at all out in California on hard-pack like this?

Absolutely not. I haven’t rode a hard-pack track since Las Vegas, so that played into it too. I’m not very used to it. No excuses at all. I had good speed and the races didn’t go my way. It’s racing. It happens. I just wanted to get the cardio out of it, which I did. Come here, do some races. It’s a workout towards my season coming, so many good things to take from it. Like I said, I’d one hundred percent do it again and hopefully be more prepared.

Finally, is there one thing you took from this that you now know you need to work on? The situation was not ideal, so it is tough to make that decision, but was there something that stood out?

Yeah, honestly the biggest thing that stands out is just showing up ready, showing up with everything… Travis, he didn’t even sleep much. He was like, “I guess we’re going to Paris, so I’ll go to the shop in the middle of the night and just start throwing things in a bag. Hopefully we can take enough bags to make it happen.” We need to ship the whole bike in a crate, my bike, next year and come here, be ready, get on the gate and know we are going to race. Unprepared, but still a lot of fun.