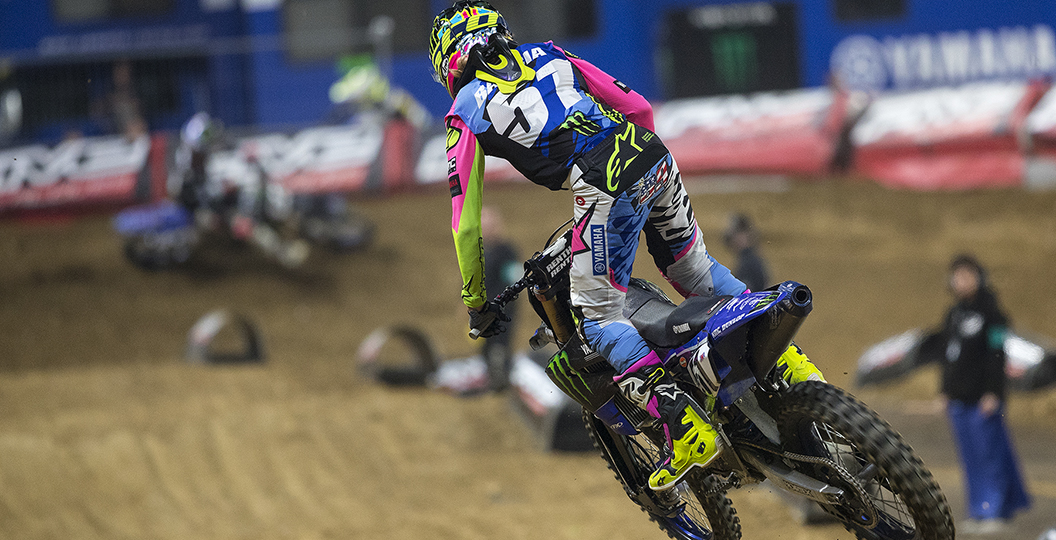 Justin Barcia has been very open when discussing the struggles that he has had with his bike set-up in recent weeks, even taking to social media to let his fans know that he reverted to a stock bike and built up from that point. The hard work paid off in Paris, France, over the weekend, as he romped to the overall victory and picked up the King of Paris title for the third time. What did Barcia have to say about everything that has gone on in recent weeks? Here is an exclusive MX Vice interview from the stadium.

MX Vice: You won! I don’t think you can really ask for much more, especially after the rough couple of weeks you have had, I guess, or at least the amount of work you have been putting in with the team. This is a nice little reward.

Justin Barcia: Yeah, a nice little gift. Hopefully they will be happy at home. It’s not really a super serious race, but for me it’s a serious race and I enjoyed it. I could have had a few better starts and maybe a couple more wins but, all in all, a super positive weekend. A few things popped up with the bike that I know I can work on, which I’m glad about. That’s what this race is for, to see what we can work on at home and fix. We have got a few weeks before Geneva, so try to do some quick work and have a new package for Geneva.

I felt like watching you yesterday and then today, you looked lightyears better today. Did you feel that yourself?

Yeah, I did. Today I definitely felt quicker, but the races were a little shorter today. With starts – where I started – I was only able to get fourth in the first one, second… I should have won the second one, but Mookie got me. The second one was second place, and the third one I went third. All in all, it was solid and consistent. Like I said, I have got a little work to do at home. I want to give a huge shout out to Yamaha France for bringing the truck, bikes, parts and everything. They went above and beyond for us, and they are going to help us in Geneva as well. Very good company. I really appreciate them.

Like you said, this isn’t a super serious race. A win is a win though, right? You can use this. You can take this. This is momentum. This is all good stuff.

Yeah, one hundred percent. It’s a confidence booster, for sure. It feels good to win races. There are good racers here. They are no slouches. America is obviously stacked but, like I said, it’s good to feel the bike out and see where we are at. Coming away with the win is awesome, because I have not even been here in a few years. It feels cool just to be back. Getting better with age. I don’t have any complaints. The racing was good. Just need to work on some starts, a little bit of suspension stuff and be solid.

Talk us through what you have been doing with the team lately, with resetting the bike to stock and then building it back up. How did that process go? What did you learn?

We have got a new guy at the shop who has been around a lot of teams for a while. His name is Sergio. He just came on right after the Monster Energy Cup. We were able to talk and I kind of told him what I wanted. It was good that he agreed with me. We made sure the stock engine was safe, would hold up in supercross, be able to hit the whoops and stuff. They were worried about the trans a little, just making sure it’s strong enough for supercross, but it is completely fine. I’ve been running a completely stock engine just to kind of reset.

I think for my riding style we have had way too much power, so all in all that’s a good thing. I think we can work on it a little, get a little power in a few spots – maybe off the start and things like that. That’s a good place to start. Then with suspension and chassis, we have been doing a lot of stuff and kind of going back to basics. The bike is working quite well right now. It’s turning really well. The only negative here in France was my shock was a little bit soft on the rhythms and in the whoops. That being it, it’s not too bad. I’ve been on a lot worse over the years. All in all, in a pretty good spot with the bike right now.

I guess this was a pretty stock-based bike as well, then?

Yeah. We started with a fully stock bike. We added our Pro Circuit exhaust, our KYB suspension, Renthal bars and stuff like that. A linkage, and that’s pretty much it. Stock clutch… Everything. This new 2020 Yamaha is a machine, man. It’s a lot better than the old one. They did a good job. I’m happy.

Moving forward I guess it is a case of tweak it a little bit to get it to your liking, but not overhaul the thing and basically f**k it up?

No, exactly. We don’t want to mess the bike up. It’s happened in the past, unfortunately. We have messed things up. We want to keep it as near stock as possible with adding on the little things that are necessary, but all in all I’ll go back probably… I think I get home Wednesday, so I’ll ride Thursday and Friday to get back in the swing of things. I will definitely work on the suspension a little and see what else we can come up with. All in all, I think we are not crazy far off.