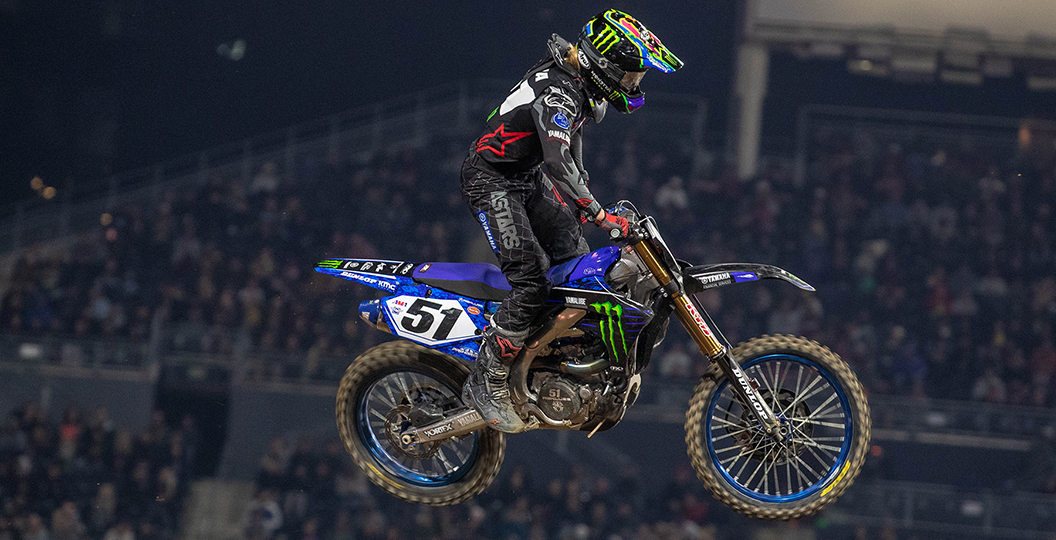 It has been a month since Justin Barcia lost stood on the premier-class podium in 2020 Monster Energy Supercross, but there are still positives to take from everything that is going on. #51 has not blown it at all and maintained a level of consistency that has enabled him to stay relatively close in the title chase – fourteen points is the difference between him and the current series leader. What did Barcia have to say about the good points from San Diego, as well as the drama? It’s all covered in this MX Vice interview from Petco Park.

MX Vice: Round six. Sixth interview of the year and more positives. Again, not on the podium, but the riding was good and so was the speed. You didn’t get lost in the Kenny [Roczen] and [Eli] Tomac battle. You were right there and looked like you belonged… That is something.

Justin Barcia: Yeah. It was awesome racing. Kenny was on my tail for a while. I cracked him. Eli kind of yo-yoed most of the race. I thought it was an awesome race. How my day started and ended was a big difference, because I really struggled all day in practice. I just didn’t feel comfortable but then I turned it around in the main event. It was great racing. Some great passes out there. The bike worked really good in the main event. I’m not on the podium, but I think I actually maybe made a little points in a way. I’ve been managing for sure, but definitely ready to crank a win out.

It looked like you and Tomac got a bit heated when you were together. I’m not sure what started it, but at one point I thought someone was going to kill someone.

We are both pretty aggressive riders. I felt like he drilled in on me pretty hard, but then we went back and forth a little. No one went down, so that was good. Back to it next weekend. We are racing hard. All in all, I think it was pretty clean racing. Another day at the races.

I guess that’s a nice little message to send as well. He went around you and you were like, “You know what? I’m racing for a championship as well, so you are going to have to put up with me. Here I am.”

Yeah. I’m sure they are not stoked. I feel like… No, I don’t feel like… I know I’m in the fight right now.

You are deep in the fight.

I’m in deep in the fight. I’m feeling froggy. I’m all about it. I feel like I’m right there. I feel great on my bike. The team has made some positive moves today. Not any crazy testing changes or anything, but positive moves all throughout the day to be better for the main event. It proved to be quite good.

While we are on the subject of heated battles, I guess we have got to talk about press day and the video seen around the world. Your perspective on it?

You would think no one ever saw anything like that on the internet before! Me and Marty [Davalos] unfortunately have had tension since 2010 when I first went pro. I felt we squashed that, but then I felt the last few weeks he kind of wasn’t riding that cool with me. I felt like he cross-jumped me a couple weekends ago. Yesterday I felt like he cross-jumped me pretty hard, but obviously he says he didn’t. I got him in a corner. He was mad.

What was up with the hands in the air thing? “I didn’t touch him… That wasn’t me.”

He called me the P word a lot because I don’t want to fight. I’m just not interested in fist fighting. If I wanted to fist fight, I would have joined the MMA.

Imagine the views on that video though [laughs]!

Yeah. Luckily I’m not really a hot head so I was just like, hands in the air. He grabbed on my helmet and said he was going to kill me. It’s fine. I’m over it. I don’t want to have to have tension with anyone, but it happens sometimes. It just got blown out of proportion. Besides for cross-jumping, I guess if he didn’t do it on purpose I probably shouldn’t have tried to block pass him.

You didn’t even really do anything, though. It was like you had a forcefield around you. I’m not even sure if you touched him.

It was incredible. I barely touched him, but he was so high in the corner and wasn’t expecting me to drive in there.

What impressed you more? The way you took him down or your A1 win? Is it close?

If that was in a race, that was the best pass ever. Close, maybe. It’s all good. I’m focused on a lot of other things besides that. It happened and people got excited. Luckily I’m pretty good at overcoming stuff like that, so it’s all good.

What about the technique work you did with RV this week? What specifically did you work on and how did it help here?

RV just has the racing eye. He can see stuff. He’s been around a long time. It was cool. San Diego is not too far from where we have all been living, so RV came down. He can see things that some people can’t see, just stuff on the track. Carrying speed in spots, picking rhythms and things like that. It was super helpful. He is a good dude. It was good to have him. It was cool. I got to race him a bit before he retired. Now him helping me out a little, that’s rad. Hopefully I can keep it in my pocket and use him every now and again. It’ll be cool.

Last thing, that’s it for us! I’m off. How are you going to manage to keep the positive vibes going without me? Do we need to do weekly calls?

I think I’m going to have to have you call me after every race and talk about it.

I’m deep in this title fight as well now.

I can’t believe you are leaving. I’m actually disappointed. If I could go back to Europe right now, I’d probably go too. I like Europe.

I think you are drunk.

Come on, mate. It’s good. Europe is fun. We’ll miss you for sure, buddy. Good work.