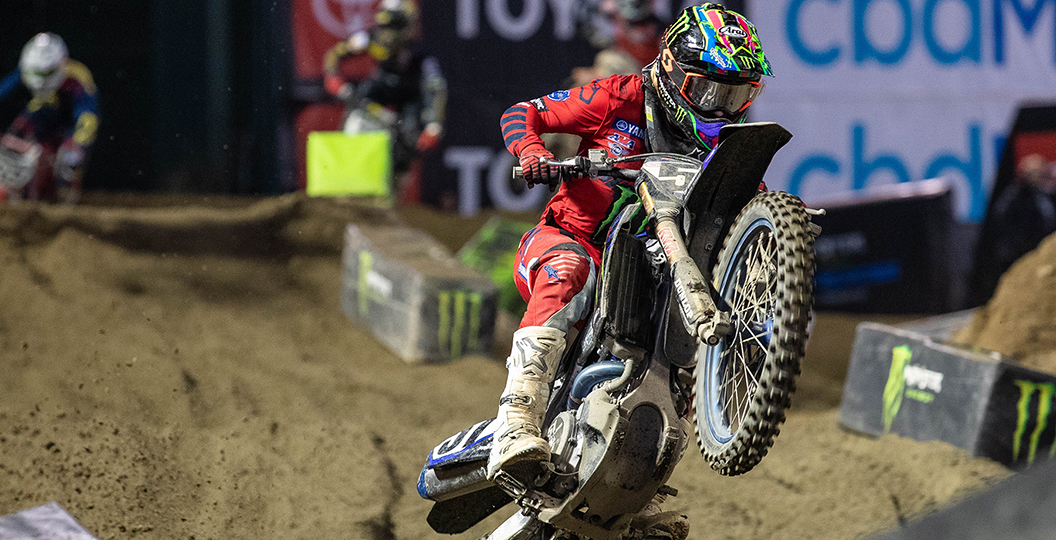 Justin Barcia made some big steps forward at the fifth round of 2020 Monster Energy Supercross in Oakland, as he found a happy medium with his bike set-up again and showed flashes of that brilliance that led to a win at Anaheim 1. The end result did not reflect just how well he rode and MX Vice editor Lewis Phillips caught up with Barcia to discuss exactly that. There is a lot of intriguing information to pull from this candid chat as per usual.

MX Vice: I wanted to come and find you tonight. The result again maybe wasn’t what you wanted. You weren’t on the podium but I think it was all positive. I don’t think there is a single bad thing from today. You looked frisky from practice. It was clear that you were better than last week – or at least feeling more at one with the bike – so it’s all good.

Justin Barcia: It’s all good! Like you said, my main event was an awesome ride. I rode from the back – far outside gate – all the way up to sixth. The charge was awesome. My bike was working really good and I felt like that’s the best I have ridden since I had that feel in A1 or St. Louis. It’s nice this week… Going into the week I know I don’t have to reinvent the whole thing. I can kind of just focus on riding. Tonight was a big confidence boost for me.

The finish was obviously whatever, but it’s a win in my riding and the bike set-up. That’s cool. It was a tough day. The boys had their work cut out for them. In the heat race I was charging hard, got up to third and something happened with the bike. We had to pop a new engine in before the LCQ. I went into that and won it with a good ride, which was awesome. Like I said, in the main event I had the far outside gate and sent it. It is kind of impossible to get in there though.

I rode really well. I am happy. Last weekend was like, “I have got a lot of work to do.” Going into this coming week I just feel like I’m in a really good spot and I have that confidence back to win. I’m in a really good place. Whenever it’s time for me to win, I’m ready to win. Hopefully that time is next weekend. The sooner the better for me. Definitely feeling really good and positive about the night.

This is going to sound insane – obviously the start in the main event wasn’t great and you didn’t holeshot the LCQ – but you struggled with starts last week and I did think they were better this week. I watched closely, and I thought I could see something.

Yeah. My heat race I had a really good start and then one of the privateer guys on a Suzuki really sent it in there, so he nailed me pretty hard. I was third or fourth off the start in my heat race, so that was awesome, and then the LCQ was not perfect. I probably just had a lot of adrenaline going. I felt like my start was good in the main event but I was so far outside. That’s the good thing. I can go and work on my starts this week. I don’t have to go reinvent the wheel on suspension and things like that, so we will brush up on some technique stuff a little bit and I will just keep moving forward.

I feel like this was a big one for you as well, because obviously you have mentioned a few times that the dirt here is similar to Anaheim 2 where you first struggled. I know you have kind of been building for this, and even in Glendale this was kind of in the back of your mind. It must just be a weight off.

Yeah. It is a lot of weight off my shoulders. We got a little bit of outside help actually this past week with Ross Maeda, who owns Enzo, which was really cool. He is someone who I have never worked with, but he brought some new things to the table with the bike and we ran some of that this weekend. It was obviously super positive, so that was nice. I feel really confident in my bike set-up right now.

The dirt here for sure was slick and it broke apart. The whoops got kind of cupped out and sketchy, and my bike went through the whoops good. It turned pretty good and I was able to ride it hard. I can’t really ask for much more than that. If I would have started up front it would have been a different story, but that’s how it goes. We’ll be back at it in San Diego next week.

This is a ridiculously positive interview and I’m going to clock off every improvement you made… When I got into the stadium and looked at the track, my first thought was that I hope you got your turns dialled in. That was another struggle from last week. Again, that wasn’t a problem and there was a sh*t ton of turns out there.

That’s the thing. You are bringing out all the good things in this interview and I’m liking it! There was a lot of turns. The whoops weren’t massive but they were whoops that could slow you down. Actually the main event was the first time I think I have ever passed a Stewart brother in the whoops, so that was cool. I passed Malcolm in the whoops. That doesn’t happen often.

My bike was turning, so that’s what we were having a hard time with. We could make it turn, but then we can’t make it go through the whoops. This weekend it seemed like we kind of found a little bit of everything. Obviously every track is different each weekend. We have just got to stay on our toes. I believe we are in a really good spot right now, ready to nail some starts and get back up on that podium or go for that win.

You have done a lot of work on your bike over the years and that’s always been something in the back of your mind. How nice is it going into a week like this knowing all you have to do is a couple of starts and some technique stuff?

It’s great. Luckily I have my whole team at call if I want to work on anything. It’s a good feeling knowing that I can focus on my programme and not have to be a full-on test rider this week. That’s definitely a nice feeling, but we have been working really hard and it’s paid off to get more comfortable on the bike again. Going into this week I will just work on some technique stuff, focus on myself and have a good time.