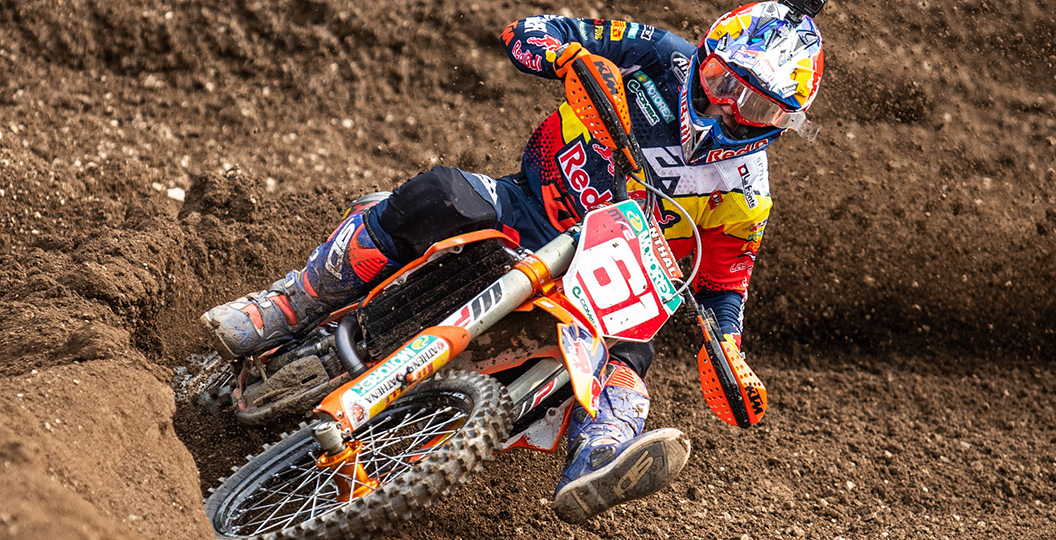 Jorge Prado is simply phenomenal and the Grand Prix of Czechia was a nice reminder of that. Loket is a circuit that does not pose too many options and yet Prado managed to operate at a much higher level throughout the Grand Prix. There was just no way that anyone was going to manage to beat him straight up. The result of that was his twelfth overall win of the term, so his unbeaten record was maintained, and he now leads the title race by ninety points. Everything is perfect in the Prado camp.

MX Vice: Another 1-1… Another commanding 1-1. At no point in the weekend did I think you were in trouble or think anyone was faster than you. You did not look like you were pushing. It looked like it came quite easy. This is just normal, because that is how things go for you.

Jorge Prado: It was a great weekend again. We did a couple of really small changes, but we improved, so in that second moto I really felt good. That first moto I struggled a little bit, but in the second moto I really enjoyed riding. I had confidence with the track, with the bike and everything just went smooth. I really enjoyed riding. I was quite happy. The track was very rough. Happy also with the fitness. I am getting a bit better now. Super happy. Good weekend.

What was it you were struggling with a little bit in the first moto? Was it the suspension or engine set-up? Anything specific?

Yeah, a little bit of everything but we got it fixed for the second moto. It was nothing crazy. I was feeling better in the second one, for sure.

Were you chasing set-up a little bit across the practices as well? In free practice you were sixth or seventh and then in time practice, if I remember right, you did not set the fastest time until quite late. At that point I was kind of waiting and waiting, then it hit. You did not drop from first all weekend after that. Was there something you were testing there?

No, not at all. Free practice, I do not know why I was seventh. I think I didn’t find a good lap. In time practice again I didn’t really find good laps. With so many people, and this is a tight track, you find someone in your line and you kind of mess up the good lap. I found it in the end of the practice. I found a good lap.

I think it was the last lap of the practice. I was feeling good already since the beginning of the weekend. I was coming here very motivated, because it is a track that I like. You need to ride smooth. If you are riding loose and smooth, you can get good with the track. Otherwise you will mess it up.

There were a few little track changes like a few rollers added in places, little doubles and stuff like that. Did you think it made it better? Were there more places to pass?

I think the track was quite good. They made, for sure, changes from last year, like double lines and stuff. I think it was fun. I liked them. It was not like in other races that they make things worse, but here they made it so that we really could use all of the lines during the weekend. On Saturday maybe we used one. On Sunday we used others. Even in the first moto I went to the full outside after the finish, for example, then second moto I went inside. It was good to have different lines.

Maybe I am drunk, but I feel like it was rougher than last year as well. Did you feel that?

For sure. I think this year was very, very, very rough. I was watching on TV and you did not even see the bumps, but when you are in the track it was so rough. The downhill was okay but just the rest of the track was very bumpy… Big bumps. I was quite surprised. In the last years they did not have races like this. It looks like lately they are leaving the tracks quite rough. They are quite physical right now.

I think we were complaining at the beginning of the season that all the tracks were flat and flat, so I think now they do not even touch them from… Maybe they are still bumpy on Friday! I think now they are fixing them less. I was quite okay with watering a bit. For us it was a bit muddy the first laps, but then it was getting a bit better during the moto. They are working quite okay the tracks. I like it.

It’s funny. When we were talking in Indonesia about your new deal for next year and going up to a 450, you said even if by some miracle you lose this title you will go up anyway. Just because you feel like you are ready. I feel like this weekend kind of reminded everyone of that because it came so easy to you. If you did another year of this, you would not move forward as a rider and all of that. You need that fresh challenge, because you are not getting it in MX2 anymore.

Yeah! Probably for the sport, for my career as a racer and to improve it would be good to move up to the 450. On a 250 the riders are very good, but in 450s we have so many world champions at the moment. The level is super high, so they are riding fast. Hopefully I can get well with the 450 and we will see where I am next year.

Like Tony said last night, you are making this so boring. So boring. It would be okay if you started fifth, sixth, but holeshots every time. It is just boring for us.

Yesterday I started third, so…

That was still not that great.