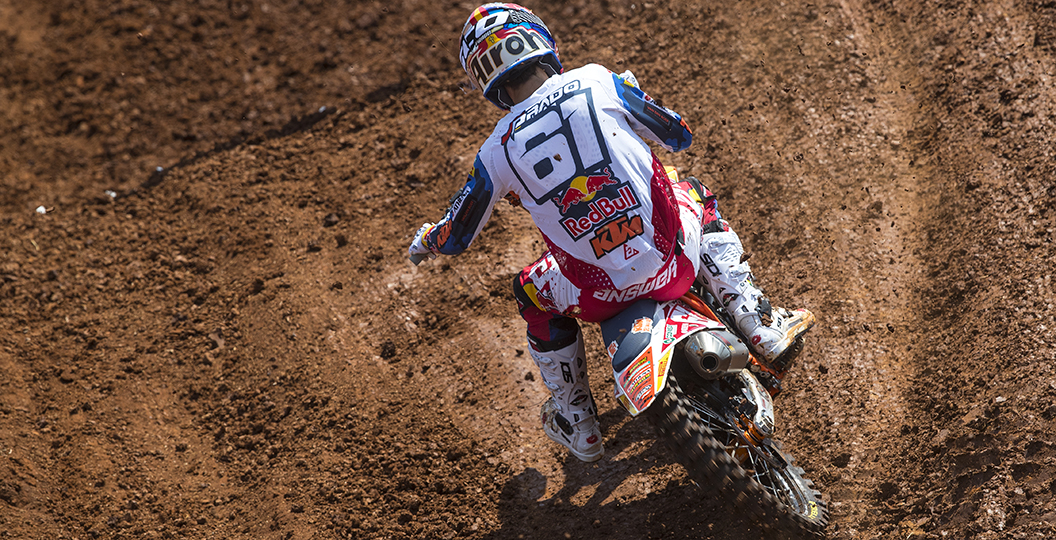 Jorge Prado continued to strengthen his grasp on the red plate in the MX2 category this past weekend, as he logged yet another clean sweep of the two motos and left his competitors searching for answers. Prado was understandably pleased, after extending his series lead to seventy-eight points, and offered up some thoughts on his current situation in the form of an exclusive MX Vice interview.

MX Vice: Another week, another race and another win. Your series lead is pushing a hundred now. I think it is around eighty. That was worth the trip to Indonesia, I would say.

Jorge Prado: Yeah, they were a very good two rounds. Anyway, it was a pity that [Thomas] Olsen crashed in the first corner. Already a crash is bad and, on this track, when the dirt is so hard, it makes it even worse. It was a pity that he did not finish that second moto. Hopefully he is okay right now. I spoke with him and he was feeling okay, a bit dizzy, so hopefully he is good and we can continue our battle in the rest of the season.

Speaking of battles, that first moto was kind of similar to last week. Tom [Vialle] was obviously right there and pushing you. Like last week though, I kind of got the impression that you had it all under control. You knew he was there. If he tried something, you could have gone, “Okay, watch this” and turned it up again.

Yeah. I was riding okay first moto. Tom was over there all the time. I was just don’t make any mistakes and try to get that win home. Second moto for myself I felt way better. Riding-wise was good, better in the first twenty minutes than the last ten minutes plus two laps. I felt a bit weird and a bit dizzy. It is not because of the heat. We had a very good temperature over here. It was not hot at all, but maybe something I ate? There is so much air conditioning around. I just did not really feel good. Slowed down a bit and tried to secure the race. I had a big gap. I just wanted to finish the moto.

Did you make any changes between motos or do anything differently to feel so good in the second one or was it just one of those random things where you got to the line and you were like, “Hey, I’m feeling a bit better this time?”

No. We didn’t change anything. I just felt better in the second moto. The track was rough. I tried to do different things as well. Got a battle in the first lap with [Henry] Jacobi and Tom. It was a fun one.

The downhill triple was kind of a big one on this track. I think yesterday [Jago] Geerts and Vialle were the only ones doing it lap-after-lap. You pulled it on one lap of the qualifying race, I think. Was that just a move to prove to yourself that you could do it if it was needed today?

Well, I did it last year and this year I saw the jump. The landing is hard. You need to pull so hard. Double-single, it’s good. Let’s try to get faster in the rest of the track, but that second moto I did it more laps. Probably the first ten minutes, I think it was. It’s better to make it, but with a 250 you just need to get perfect the jump before to get all the traction and power to the ramp. It also makes you use a lot of energy. It’s a big one and also if you come short you don’t want to get the wheels broken or anything. I just secured doing double-single. Anyway, I think it was a bit faster going triple.

Do you think it was actually that much faster going triple though? I was trying to time it and maybe it was by a tenth or two. I feel like maybe it wasn’t worth the risk?

Yeah. The thing is that okay maybe it is not way faster, but it is a bit faster and then you get also smoother into the next corner and everything is more fluid. I think it was better to make it anyway double-single. Breaks a bit the rhythm. Was good enough today.

How was the watering today? Did they leave the take-off of that triple alone? Was it okay everywhere else?

They watered it quite a lot [before the] second moto, but in places that were not too dangerous or maybe it was because today we had more ruts. The track was better, because yesterday we all complained a lot. They made a way better track. At the end it is difficult to have perfect dirt over here, because it’s so hard. You basically cannot do so much to have a perfect grip over here.

What do you think of this track? Everyone has got an opinion and everyone is talking about these Indonesian races, but I think if we are going to come to Indonesia it is going to be hard to find a track better than this. For a flyaway, this is good. We can accept this.

The track layout can be one of my favorites of all the GPs. It is a very fun track. Just the dirt. If this track had a different dirt, it would be amazing. I’m having a lot of fun on this track. It’s a good track. First round in Indonesia was a bit of a small track, but that dirt, if we could have it here, it would be awesome.

Two weeks in Asia now. Two races. A little trip to Bali. Are you ready to get back to Europe?

Yes. Go back to Italy, go to the sea a little bit, relax, train, pump track and get back to the normal life.

Let’s talk about this quickly. Indonesia is different. It’s a bit of a special place. How stressful is it for you to try to make sure you eat the right things and you don’t get sick?

I was very lucky this year. We went to Bali and I ate quite clean. I didn’t feel bad in the stomach the whole week or I didn’t have any problems with that. You also need to be lucky. I have been lucky. I was focusing a lot on what I am eating. It takes also energy because sometimes you are like, “I want to eat that!” You know you better stay away, because you can get problems. When you are coming to these countries, you need to be careful with food and for sure drinks as well.