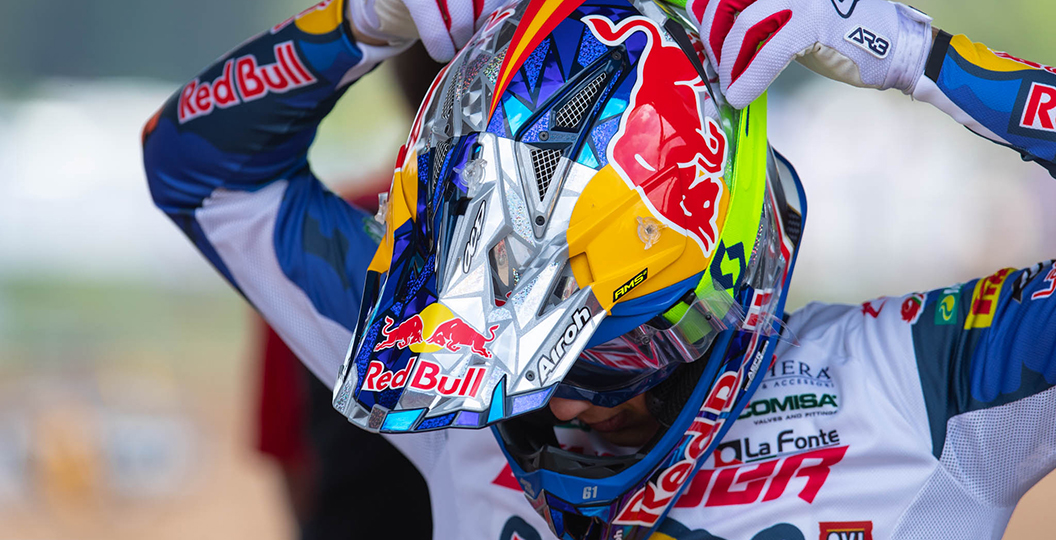 The Grand Prix of Latvia was chaotic, in every sense of the word, but it was business as usual for Jorge Prado. Prado claimed yet another overall win and extended his series lead by ten points, which is not shocking in the slightest. Another dominant weekend was recounted by him in the form of an exclusive MX Vice interview on Sunday evening. This interview was originally shared as a podcast.

MX Vice: 1-1. It is pretty normal for you and business as usual but, based on the number of guys that got caught out by this track today, I am guessing you are especially happy to leave here with such a strong performance.

Jorge Prado: Yeah, I am very happy. The last two years I have been fourth twice. Last year I won the qualifying race. I won the second moto, but in the first moto I had two crashes in the first lap. I still got to ninth, just out of the podium, and this year I came with the mentality to get it done again. Two moto wins, which is very important. I am feeling good, so I know I can do it. Everything went perfect. Right from the free practice I felt good. It was a perfect weekend.

Did they do anything to the waves today? If I remember right, in qualifying you were on the outside all the time, at least at the end, and then in the first moto you were doubling out from the inside. In the second moto you were back to the outside. Just talk us through that.

Yeah. This year the waves section was just longer and way bigger. On Saturday they did not fix them for the qualifying race, so they were destroyed and for sure way lower than they were today. The rhythm, just the way you go through them made you go to the outside or just a different line than today. Today they fixed them for both motos, which was very good. I am very happy that they could work on the waves.

Today I just chose a different line and a different line combination also out of the corner. I was getting in a bit different, so everything made it so that I chose different lines. It was good that they fixed the waves, because it was a very sketchy spot, but they fixed way too much. Both motos looked like a speedway. The track is super flat. We are riding motocross and it should be a bit bumpier.

Do you think them fixing the track too much is why we saw so many crashes? Like the Tony crash on the first lap? Do you think it was too fast?

I do not know if it caused the crashes. They should fix the ramps and the waves section, for sure, or just sections where it is very sketchy. This I also want fixed, because security and safety are first, but not the straights and not the corners. I came out after the sighting lap of the second moto. First moto for us is pretty much always flat, but I expected the second moto to be bumpier.

I came out from the sighting lap. I said to my father, “What is this? It is flat? If I start in first, then how can I make time to the other guys?” If it is flat, everybody gives gas. It was just pushing and keeping the flow around the corners. It was not very physically demanding. It was physically demanding, because you had to push every lap to be consistent, but it was not bumpy at all. On Saturday it was way bumpier.

Did you find it easier to gap the field in the second moto compared to the first then? Were there a few little spots where you could be a bit more technical? Obviously, like you said, they still fixed it, but was it a bit better than the first one?

Well, maybe a little bit bumpier. Just a little bit. I don’t know. Maybe I was a bit fresher for the second moto. I feel good. Second moto was good. I kept my lap times. [Thomas Kjer] Olsen started second, I think, and he pushed very hard in the first two laps. We were going very fast, but I could maintain that until the end. At the end I had a big gap.

Thirty-point lead now, so that is looking good…

Yep. Thirty is a good number.

One moto and a little bit. Still not enough, but we are in a good way.

It is a bit early to ask this and I probably should not, but we are here. We have not got anything else to do, so we might as well. Next year. Everyone wants to know what you are thinking. Nothing is decided yet, I am sure, but what is your mindset like currently?

There are still a lot of races and a long time until we finish the season. I think we are not even halfway or kind of. It is still a long season and I am very focused on getting this done, this championship. We are in the good way. It is tough. My rivals are also very fast and strong, so I need to keep myself very concentrated every time I go out. Make good starts, good performances, just focus on myself and keep doing what we are doing. We are in the good way.