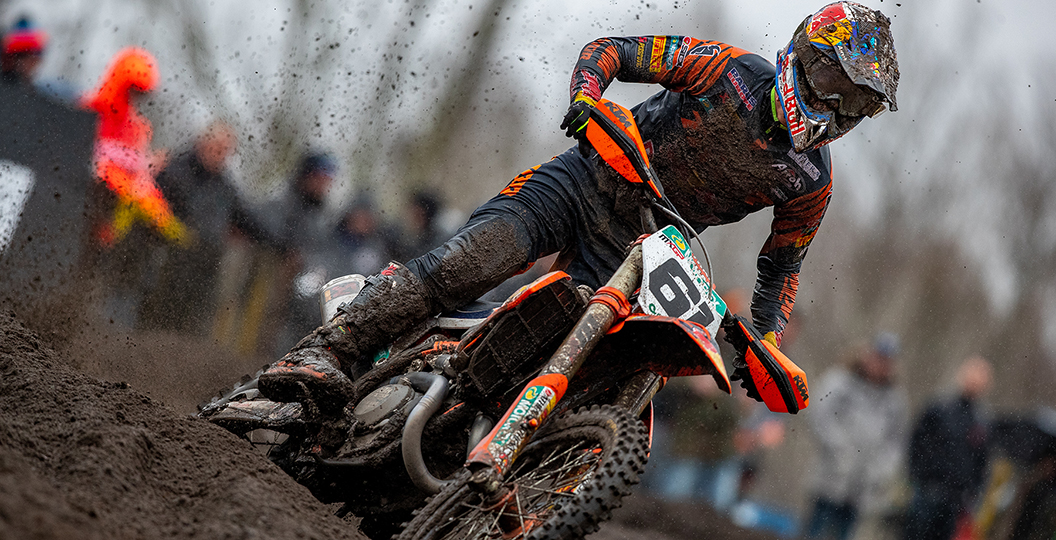 It is very easy to forget that Jorge Prado entered the 2020 FIM Motocross World Championship fresh off of a broken femur. The two-time world champion was not even expected to race! Prado lined up with salvaging points in mind, but already started to fight for a spot up on the podium at the Grand Prix of The Netherlands over the weekend. The rapid progression is amazing to see and discussed in this exclusive MX Vice interview from Valkenswaard.

MX Vice: Awesome weekend, I think. We have only had a week since the first round, but you have taken another step up. We can see your recovery is going well. You are progressing nicely. The second moto sucked but ignore that. Everything else was great!

Jorge Prado: Yeah. Every weekend I feel better and better with the leg. I still don’t physically, because I did not have so much time on the bike. Every time I go riding it’s one more day of training. This weekend was very good. Yesterday I could show very good speed already in the quali race, where I said to myself to push a little bit just to see where I am with the speed. The speed was good though – I finished third. I felt good this morning. In the first moto I finished fourth after a good start. The first three were faster.

I just stayed on with my rhythm and finished fourth. Pretty happy. Super happy, actually. It is a very good result for me. In the second moto I was very motivated to get another good result. I had a good jump out of the gate, but then I lost it a little bit in the rut just when the front wheel touched the dirt. That made me go into the first corner around second or third. In the first corner I lost the front completely and crashed. It was a big crash but, luckily, I did not get hit by any other riders.

I’m grateful that I’m still on two feet and not hurt, because it was very easy to get hurt with that crash and I’m coming from an injury. It would not have been good for me. After that, the first laps I could gain many positions and finish twelfth or thirteenth. I don’t really know. I know I am ninth overall. Better than last weekend. Eighth in the championship right now, I think. Getting better and better. I’m very happy with the progression. Pity about that crash in the second moto today, because it could have been a bit different. I’m feeling good though.

That first-corner crash was gnarly, wasn’t it? You found out what it is like not to get a holeshot [laughs]!

Yeah. I was still second or third in the first corner, but the thing is after the sighting lap they did not flatten our ruts. I took one of them and I was behind someone, so I really could not see. I lost it. Things happen. That is experience that I still need to start first to avoid all those things [laughs].

I am still so impressed at your fitness and everything after so long on the bike. The conditions were gnarly this weekend and you did not drop off. You were a pretty steady level the whole time. Is that a surprise to you?

I’m working very hard off the bike, even when I was off the bike [with the injury]. Now that I’m on the bike, I try to do as much training as possible to get the rhythm and the fitness. That is very important. I’m handling the motos quite okay. Like today, the second moto was very physical. The sand was very soft, combined with the mud, and it was a very slippery track. I’m not so strong at the moment, so I kind of struggled a bit more. When the track is a bit easier, let’s say physically, I’m feeling quite good. This will be better and better every week, and now we have two weeks until the next one so hopefully we can do some good training. We will see how it goes.

With the insane ruts and everything that we have here, do you have to be careful not to hit your leg? Are you confident enough that it is all healed now, and everything is fine even if you do hit it hard?

Every time I am more confident to put the leg on the ground. At the moment I would say I do not have many problems with the leg. No pain. For sure tomorrow morning I will have some muscle pain, but it is normal. It takes some time to recover and all the energy goes to the leg, because it’s the weak part of my body right now. I’m pretty happy that every week I feel a big progression. That helps me a lot with riding, because I can do many things like jump a bit further when I land. The landings are very tough for me. When I land, I kind of go like a snake. I don’t go really straight – I don’t have so much power on one leg. I’m getting better and that’s helping me with riding.

Going back to starts, since you got off the 250F have you had to work on your technique or change anything at all to get a good start on a 450F?

No. I’m very good at starts. Yesterday I got a holeshot, or not in the quali race?

I had a good start, let’s say.

I think you did not holeshot, but you got the lead or something.

Yeah, something like that. I was starting from the twelfth [gate]. Here in Valkenswaard positions are very important on the inside, even though Tim Gajser today showed that from the outside it is also possible to start good.

He fully sent it though.

Yeah. Impressed. Got a good start. Today first moto good start. Second moto was okay. If I did not crash, I was inside the top four. Yeah, I’m quite okay with the starts on the 450F. Just need to keep training a little bit with the starts. I think it’s more the confidence.

The first two rounds have been so good for you, with everything you have been through. All I’m thinking about is how good you would have been had you come in healthy. This must have given you a bit of confidence about that as well. It’s quite clear that if you had come in with full load of training under your belt, and fully healthy, you would be right in the mix.

Yeah. We will never know.

Good. Thanks. I still need to get a lot of bike time. I’m for sure very, very happy with the set-up of my bike. We are improving every weekend. My speed is going every time a little bit up. Fitness-wise too, that’s also helping me getting also the speed. I’m feeling comfortable on the 450F. It’s not bad luck, but I got injured so then I lost a lot of winter preparation that’s very important for the whole season. Things are like this right now and I’m doing the best I can with how I am. I think I’m doing pretty good. This class is very packed. To do a third yesterday and a fourth today… The last moto wasn’t that good, but it’s not too bad coming from a broken femur. I’m happy.