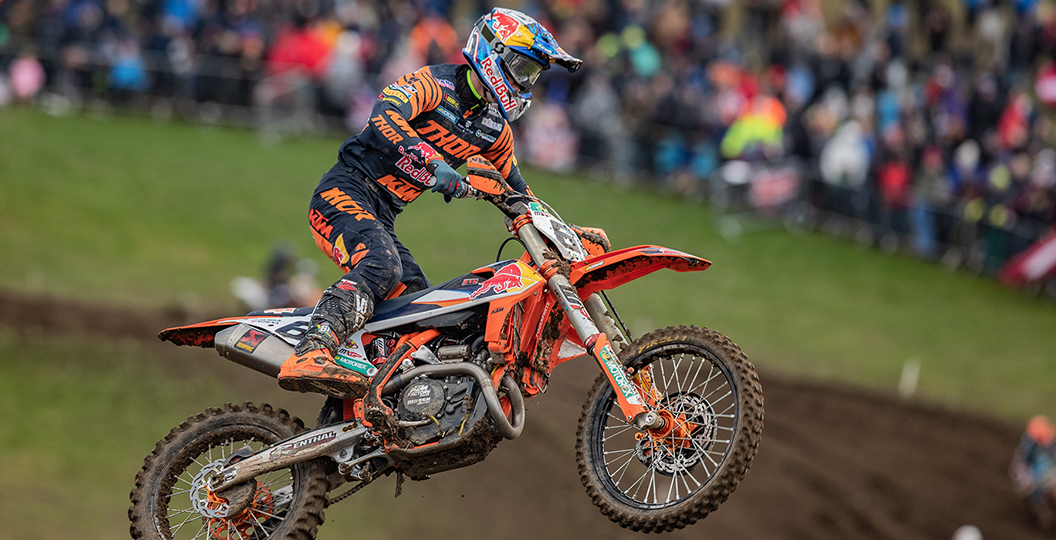 Amazingly, Jorge Prado made his premier-class debut at the opening round of the 2020 FIM Motocross World Championship. Prado broke his femur in December and only started riding two weeks ago, but was eager to start the next phase of his career at round one. How did the injury hold up in the long ruts that snaked up and down the valley? Prado spoke about that and more in this exclusive MX Vice interview from the circuit.

MX Vice: I’m still in shock that you are even racing, but even more surprising is that you were pretty good today. I thought you’d have speed for four or five laps, but then you would drop back quite a bit. You held your ground pretty good. All in all, I don’t think you could expect anything more.

Jorge Prado: Yeah, just to be here racing was the goal. I’m super happy that I could race and start a championship. We should start racing in a couple of GPs. Maybe Argentina was already soon for us. Maybe after that? We could make it happen to race here. It was a great weekend. Tenth overall. First moto I felt quite good. I felt that I could gain a couple of spots in some points, but made a couple of mistakes. I cased the quad and hurt my hand a bit. I kind of lost the rhythm there.

It was alright. I was happy with the ninth. In the second moto a bit tougher conditions. I lost a bit the rhythm in one point. I rode just a couple of days on the bike since the last race at Assen, so right around the time to go you can’t expect to be one hundred percent for both motos. I did my best. I tried not to crash. The track was very tough physically and very bumpy. Tenth overall… I am very happy.

Did your femur recovery go quicker than anyone expected? When you first broke it, was the doctor saying three or four months? Was he surprised how quickly you were able to get back on a bike?

When it broke I got surgery directly and the surgeon – the guy who made the surgery – was pushing a lot. Already since day one we started moving the leg to get the circulation going and to not lose the muscle that I gained in my off-season preparation, because then I was starting to ride the bike. The doctor didn’t say anything. He just said, “You need to go! You need to do the rehab as much as possible, move as much as possible and start walking without the crutches as soon as possible.”

He just wanted me to walk normal after one week. I think I started to walk without crutches after one and a half weeks and started the rehab very quick. I started training on the bicycle and stuff after one month. I was happy that the recovery went very quick. Like I said, when I crashed we were expecting to lose at least four rounds of the championship.

Were you in any pain today or was it all pretty good?

No, actually I’m not in pain. Zero pain. I need to be careful with the leg. I didn’t really want to risk putting the leg out in the starts… I’m a bit careful that no one touches me. No pain though, so that’s something that I’m very happy about. I didn’t have infections during my rehabilitation and that made it so quick. Everything went clean. Today on the bike there was no pain, just of course I need to get more bike time.

How long do you think it’s going to take then? Do you think maybe in Trentino you’ll be more like yourself? Is it going to be Spain or Portugal?

Then I will be one month and two weeks on the bike.

Well, that still isn’t much.

These guys would have three months on the bike. Depends. For two weeks, and let’s say the first week I was riding maybe twenty seconds slower than I can ride now. Not even putting the foot to the ground… I was testing the leg. After two or three days I did some motos, like thirty minutes. I just need to keep riding, keep riding and hopefully for sure every weekend I will see a small improvement. These guys are riding hard. Hopefully we can get to the top, because I’m a world champion and I need to get there. I like that spot [laughs].

I guess you must have work to do with the bike as well? You must have missed testing and stuff like that?

I was very lucky that I got my testing done after Assen. After Assen I did my testing. We made the bike perfect and then I got injured. The bike was already good. That’s something that we were very lucky with, because when I started riding on the bike it was perfect for me. Right now the bike is good. I have a great team behind me and when I need something they will put it into place. If they think they can improve, the bike will be better. I’m super happy. Everything is going very well. I don’t have pressure. I just need to do my best. I put a bit of pressure on myself, because I want to do good. I need to take it easy and take it race-by-race. I need to train.

This was your first MXGP race. Did anything surprise you about the class? Was it just how fast every single person is, even back to eleventh?

Yeah, I think the top fifteen are very fast. I can’t really say anything because I’m not a hundred percent, not even close to that. Speed-wise, I didn’t see myself too bad.

You went to the top in warm-up this morning for like a second, so that even said to me that you have already got it.

Yeah. Speed-wise I’m not too bad. For sure the guys on top are faster. Physically they are better. I’m not too bad to be behind them or let’s say after half season when I get more bike time I could be touching them a little bit. Hopefully! That’s my goal, for sure.

If you get holeshots that will help.

Yeah, for sure. This weekend I had the eighteenth gate pick, so first moto I was way outside but it was a perfect start. Even if I was on the outside I arrived to the corner pretty quick. In the second moto they left a very good spot. When I put my bike on the grid I saw in the front that there was a big hole. I was like, “That’s why they left it!” The start wasn’t too good. I got a small wheel spin, but I did my best. I’m happy about today. We’ll see what the future brings. I’m excited, because we were talking before… It’s a class that everybody rides hard. Top ten in my first GP after coming from injury. Didn’t expect this.