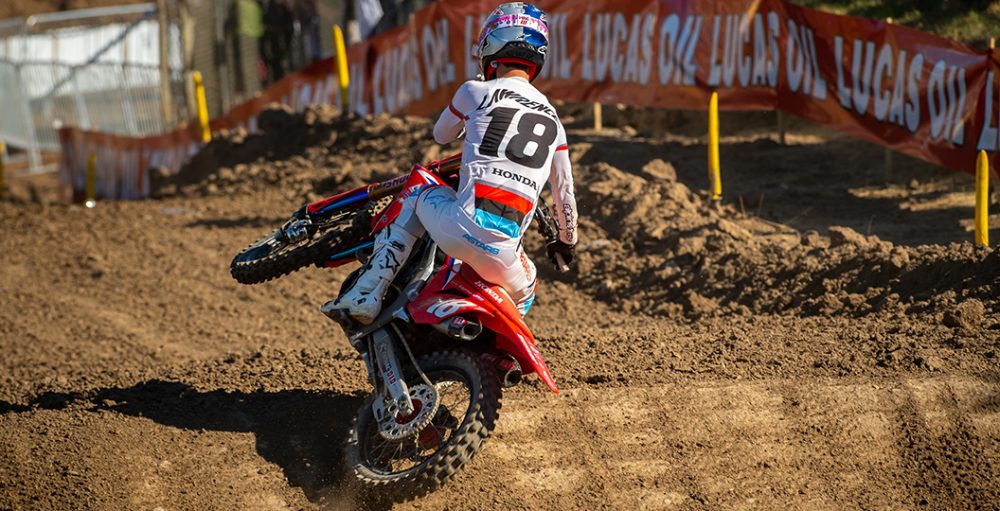 Jett Lawrence clinched the 250MX title in 2021 Lucas Oil Pro Motocross! Following a wayward time of it at the season finale, Hangtown, Lawrence clinched the championship with a six-point advantage and etched his name into the record books. It was a significant moment for Lawrence, but also the entire Lawrence family. It has been a very, very long road for the Aussie family.

Lawrence tackled questions from the media in a post-race media event. Despite a championship party, arranged by Red Bull, that was raging on, he provided insightful answers to questions about his season and background. Lawrence ended the 2021 Lucas Oil Pro Motocross series with two pole positions, eight moto victories and three overall victories.

MX Vice: What did not happen today? Was it nerves or just bad circumstances and things going wrong? What was the problem? It obviously did not go as smoothly as you were hoping it would go.

Jett Lawrence: I will tell you what didn’t happen… I did not ride good at all. I sucked today. The practices were good, but on the first moto start I was sleeping. I was riding way too fast for the track and rushing stuff. I was just being stupid really. Thankfully, I got a bit of a blessing with coming up to eighth and then finishing third in the second moto. That thankfully wrapped it up, because it was not looking pretty after the first one.

Can you take us through the feelings and the emotions when you crossed the line and knew that you had the championship?

The feeling when I went across the finish line was just… My body was dying. That was the actual feeling. It was cool. I do not think that it has actually sunk in yet, realistically. I think that tomorrow, once I wake up and actually process everything, I will actually believe it. I’m still dreaming right now. It was really cool wrapping it up and I finally get to have a break after this weekend.

When you had that little tip-over in the second moto, it looked like you immediately settled into a pace that you were comfortable with instead of panicking. What was your mindset at the time and how difficult was it to settle down?

My mindset when I crashed was, “You are really sucking on a dirtbike today.” I knew that I just had to get up as quick as I could and put on a charge. Thankfully, I made sure I did not override the track. The track was pretty rough, so I had to make sure that I did not overdo the track and make any of those stupid mistakes. I kind of got into a flow and just relaxed. I made my way up to third and it was a lot better than the first moto. That is for sure!

It was kind of a decent gate. Everyone knows that he is a great starter, so if I got another bad jump then I could have just gone in behind him. The starts definitely did not really work today. We have got to think ahead if something happens and have a go-to plan, so yeah.

I would like to know a little bit about what the mood was like at the track, between the motos. What kind of strategising did you guys do and what did you talk about?

After the first moto, I was definitely pissed and not happy at all. I was not a happy chap. Going into the second one, my mental state was just go out there and do my job. I have been putting in a lot of work and definitely feel like I deserve what I have done so far. I went out there and was like, “Right! It is another race, go in confident and do your job.”

Is there anything that stands out to you as a lesson that you are going to take away from this season?

Just the mistakes. That is the main thing that I have learnt, I think, just taking away those silly mistakes that are not called for and you definitely do not want. There is always room to improve. Johnny [O’Mara] is probably going to find out what I sucked at and then crack the whip in the off-season to get me back to my top shape, and good for next year.

Looking back on the season, are there any standout motos for you on the path to this championship? Have you thought much about that?

No, I have not really processed the season quite yet. I will probably go and watch some races to see what I was not good at and what the other riders were good at. I will process everything with Johnny, my trainer, and the rest of the team.

Luckily, I have a really good group around me. I am probably going to buy a house – I really need to get a house. If not, the price in the stock market is stupidly high. Like $100,000 over actual pricing. Who knows? We might go and invest in a car wash or something else that will eventually give money back to me. So far just investing with all of my bonuses.

I want to talk about those Australian roots. When you left to go to Europe, did you think that eventually you would be a champion at the highest level? Did you even have a clue that would be on the cards?

I mean, I didn’t come over here for nothing. I’m going to come here to do one job and that is win a championship. Since then, I have really been working my ass off to get to where I am today. Thankfully it has all paid off. A lot of years have been put into it. It is not like last off-season I was like, “I am going to train hard now.” It has been a long upward trail to this.

What about the sacrifices? You must have a lot of mates who you cannot see anymore, because you had to leave your home behind.

That was really hard, for a young kid. I had my best mate in Oz and we were like brothers. We did everything together. It was hard to leave, but luckily we have technology and can FaceTime each other now. It sucks, but they come over every now and then to visit. We were planning on going back to Australia this year for the AUS-X Open to see them again. With the pandemic and them [Australia] locking down, I do not think it is looking like it is going to be possible. It was definitely hard as a kid being that young. Hey, we wanted to succeed and that was the thing that we had to take away.

You are the first Australian 250MX champion in this series and the youngest to win since Ryan Villopoto. I am just curious about how surreal it is to look back and see some of these boxes that you are ticking at such a young age.

It is obviously cool to have my name in the same sentence as Ryan Villopoto. He is obviously a legend and a sick lad. Like I said before, I do not think it has really sunk in quite yet. Once it has, I will probably be like a little schoolgirl all excited and that stuff. It’s definitely cool to be the youngest Australian… Did you say the only Australian to win a championship? I don’t know. Who cares? To be an Australian and win a championship over here is obviously awesome. Hopefully I can keep this going for the rest of my career.

If there are three things that you could tell kids back in Australia, who are rooting for you every day, what advice would you give them?

One would be to work hard. That is obviously number one and the main thing! Put in the training. Two would be do not click faster than the clock ticks. I learnt that from Stefan Everts, because he would always tell Hunter [Lawrence] that because he would want to go fast now. It’s a very smart thing to say. It is pretty true because you do not want to rush time. Take it step-by-step and learn. Three is to listen and learn. When you get the best guy telling you what to do, if you don’t listen then it’s not going to work. Just listen when someone who knows what they are doing gives you information.