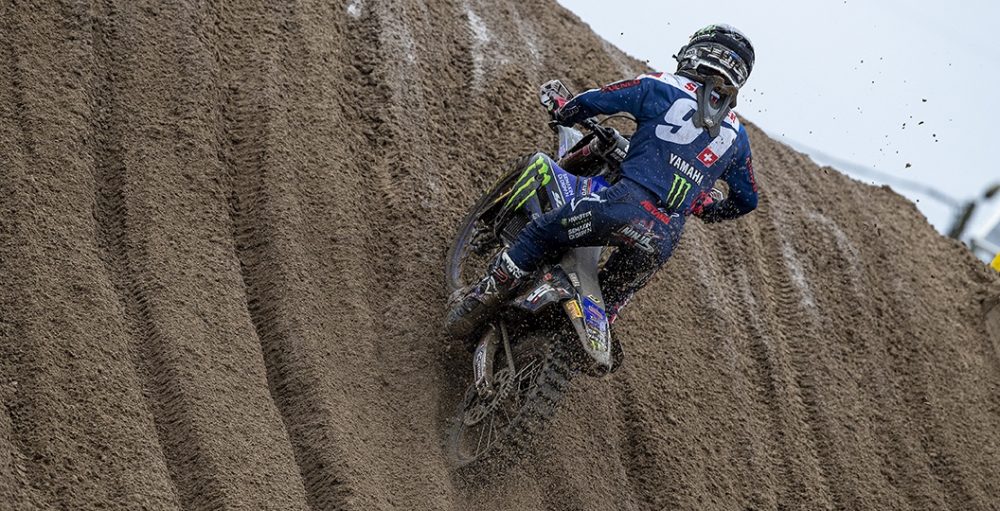 Jeremy Seewer is one of the more open personalities in the Grand Prix paddock, a point that is backed up by his comments in this MX Vice interview from round fifteen of the 2020 FIM Motocross World Championship. Seewer discusses the impact that the lengthy schedule is being to have, both mentally and physically, as well as the fact that finishing third overall does not exactly sit too well with him anymore. Anyway, dive into all of that by reading on. Seewer now runs third in the premier-class standings and just 10 points behind Antonio Cairoli in second.

MX Vice: Just looking at your week as a whole, I feel like you were probably one of the most consistent riders in MXGP. Nice to get rewarded for that with an overall podium today, finally. A nice way to cap off a tough week.

Jeremy Seewer: It has been a really consistent week, yeah, but not always the result that I wanted, especially compared to the guy with the red plate. He’s done some first places, some second and just super good. Ending it up with a podium is amazing, especially in these conditions where I come from. I live here [in Lommel] and stuff, okay, but it’s super tough. We had a bit less riders in the MXGP class today, because some are injured and Jorge [Prado] is not riding etc. Still a tough class though! I’m happy to be on the podium and keep it consistent for the championship. I had six motos and I had two, let’s say, bad ones.

I think eighth was your worst result, wasn’t it? That’s not bad.

Eighth and seventh was my worst. For the rest I was two times fourth and two times third. That’s alright. I won a GP though, so that’s the level now and what you want to do again. Lommel is just not where I could make that happen, but we have three to go and I’ll see what I can do in Arco.

You are a rider. You led laps today and in your mind you are like, “I just want to win.” A podium is nice, but I guess your mindset is to always be better.

Exactly. I’ve been on the podium today. Super happy about that, but I still want to be second and want to be first. I want to win! Today, as I said in the press conference, hats off to Tim. He was flying today. I didn’t even know where he came from in the second moto. He passed me and I thought, “Let’s see some lines.” Three corners after that he was gone and basically won the moto after a bad crash on the first lap. Even Jeffrey [Herlings], I think today he would have needed something extra to beat him.

I don’t understand where his sand skills have come from. In the class at the moment there isn’t really that exceptional sand guy, is there? I don’t think so. Especially with Prado now out as well. Maybe you would have said him, but I feel like you are all at a fairly level playing field. I guess coming into the week that’s why you maybe expected a little bit more.

Yeah. They are a little bit the same, except Prado. He can be super good in the sand but he also struggled at the first round a bit, so that shows there is not a main guy. Today it was Tim, but it gets closer and closer together. That’s MXGP.

I liked it. Something different. I hope they keep it different for training, because it’s been a while that they had it like the old layout. It was faster but not. The rhythm was different, but the rain slowed it down anyway. Our speed was not that high. I checked after the first moto and it 46 or 48. I don’t remember the speed from Wednesday and stuff.

It must have been higher Wednesday [Ed. Note: The speed was slightly higher].

I think it was higher on Wednesday. It was fine and there were some interesting changes. They did a good job with the track today, thinking about the rain. They built it higher, so the track was actually not really wet aside from two or three corners.

In the Yamaha official report thing from Wednesday, you mentioned that the season is getting long and it’s harder to stay one hundred percent physically and mentally. Is it starting to wear on you a bit? We’ve had twelve races in six weeks or something stupid.

Yeah, it does. I think it does to everybody. Nobody is going to lie, except the guys coming in now after being injured and missing some GPs. We were ready in February. You have to keep this in mind. We had the corona break, but stayed ready. I never stopped training for two weeks or anything and kept doing physical stuff. I kept keeping myself in shape, because we had no idea what was going on. It’s getting long. With my trainer, I just received yesterday the plan for week 52. That’s one year! Normally I start with week one in November and you end up at week 40 or whatever when the season is over. You have some months that are a bit more quiet. I don’t sit on the sofa for two months, no, but you recover. Now I’m on week 52 of a training schedule, so that tells you enough.

I guess this is a problem as well that you and trainers have got to think about going into 2021. Yeah, we are going to have time off. We don’t know how long for though and it’s still going to be a shorter off-season than we would normally have.

Yeah, no idea. Maybe they are going to decide that they start the season in June, because then they hope the COVID-19 situation is better? Maybe they say that they start in March anyway. We have no idea. Anyway, we need our rest. It’s better not to be 100% ready when the season starts and then to be strong at the end. I’m going to be quite relaxed about this. The winter will be shorter anyway, because we still race in November. I’m not too stressed about it.

One more triple header to go in Arco. I’ve got some good memories of you at that place. You are always quite good there, so I guess try to end with a bang and see what happens.

Exactly. I can be honest with you, Tim is quite clear in the points.

Have you looked at the points?

No, I didn’t. I can imagine, because that guy is just winning all the time. Today the speaker every time he says, “Tim Gajser, many points in front.”

You should have told him that you didn’t want to know that too.

Yeah, I should. I’m realistic though, but there is still a fight for the other positions in the championship. Anyway Arco, like you said, is a place I like. I’ve been riding good there. It’s a hard-pack track and that’s where I grew up. No sand anymore. I don’t mind Lommel, but after a week it’s enough. Definitely looking forward for this and to end with some good results and a good feeling for next year.