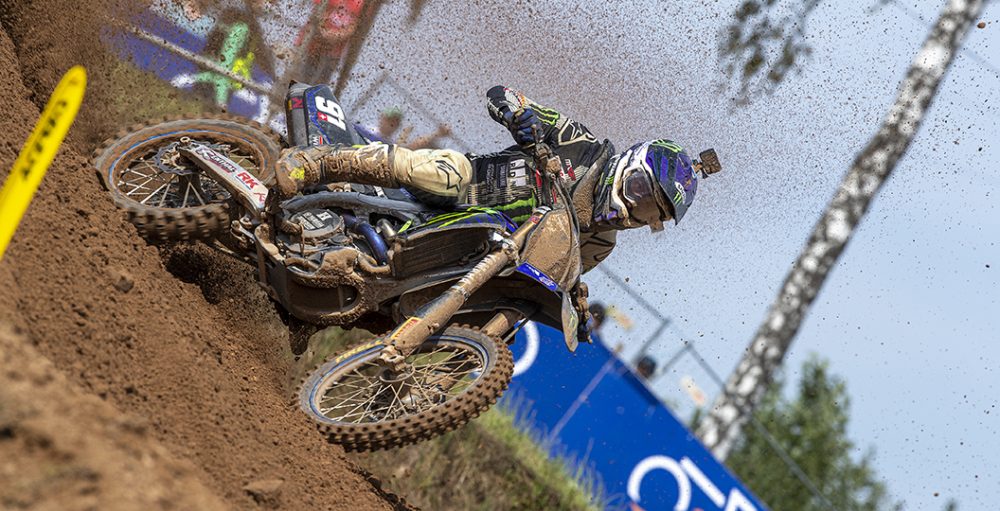 Jeremy Seewer is becoming one of the most exciting personalities in the FIM Motocross World Championship. This interview, where he is again insightful and interesting, supports that statement. Seewer reflects on a so-so day at the Grand Prix of Latvia in this exclusive MX Vice chat, as well as committing to the ‘Latvian Leap’ and his thoughts on the 2021 Motocross of Nations. MXoN lovers may want to shield their eyes when it comes to that portion of the interview.

Seewer finished in seventh overall at the Grand Prix of Latvia, via a 9-7 scorecard, and maintained sixth in the championship standings. 64 points separate him from the red-plate holder, so nothing is over, but he was just 46 down at this same point last year. Seewer is eager to claw his way back into the championship conversation and will search for answers in the lengthy break that has been sprung upon the Grand Prix contingent.

MX Vice: It was a solid day, but you were never in a position to do anything. You were never close to the front or even the top five. You made the best of what you had.

Jeremy Seewer: Yes and no. Yeah, if you check the results then again it was not what I want at all. It started in the morning. I usually love Latvia and Kegums! I did not feel the flow straight in the morning. I tried to adjust the bike and manage myself, to get better and used to it. That worked a bit. Still, having tenth gate pick doesn’t help. They closed four gates too. You had to be on the inside to get a good start, but I tried my best. They pushed me wide in the first moto. That is actually a fun story! The roost from the inside guys hit my front wheel that bad that I almost washed out just from the roost. I was doing well on the outside, in like P6 or something, and they roosted my front wheel from the inside, which made me almost crash. I was like, “No! Come on?”

I dropped back to twelfth or thirteenth and came to ninth. I finished ninth with a few mistakes and did not feel the flow – I did not feel good. There is something not going the way I want it to now. I had a better start in the second moto. I went into turn one as one of the best, but again I was on the outside and they pushed me wide. One of the guys almost hit me! I think [Pauls] Jonass went down and I went far, so I ended up in seventh or eighth. I actually had a solid moto.

I just followed [Brian] Bogers in sixth for a while. I thought that I could get him and [Calvin] Vlaanderen was in front. I thought that I could get him and that would have been for P5 in the end. Calvin crashed behind a blind spot, like just a roller. He was standing there and waving. I went to the left of him and slowed down, but his bike was laying right after the single. I just hit his bike like a complete idiot. Amateur! I thought that the point where he was waving was where both he and his bike were.

It was his fault then [laughs]!

Exactly. His fault! He should have waved like, “This is my bike! Do not hit it.”

Yeah, he should have grabbed a yellow flag and really got involved.

This is just racing. It happens! I lost about five seconds with that incident and that was it. I just finished behind him. I came home in seventh for seventh overall. It feels shit and is shit.

I was fourth at Loket!

Okay. Well, Loket was a special day. Apart from that though, I feel like qualifying is starting things off on the wrong foot a little bit.

Yes, but I do not know. I guess I must work harder. I don’t feel the vibe yet, just with many things. It has just been a struggle for some reason. We need and try to solve it. I am actually glad that we have some weeks off. First of all, I am just going to disconnect and let my body rest. It was a really tough period and I was not where I should be, so that did not help. I need to sort some things out to get back to where I belong. Even with the qualifying lap, like you said. I was so good last year. Easy, bam, P2 and then I would wait for all of the session and see that it was more than enough for a good gate. I would then have time to check out lines. Now I am chasing something all day, especially today. P10 from far outside and there is not much that you can do at the start.

I completely forgot to ask everyone else about this. Did try the ‘Latvian Leap’ at all? Do you know what I am talking about?

You go left and right after the waves, then the leap. Did you do it at all? I did not really see anyone try it in the motos.

I did! I think I was the first guy. The thing behind the pit lane, yeah?

Yeah! Waves, then left and then right. You could go inside and roll or do the ‘Latvian Leap’ as I am calling it.

It is waves, and then right and left?

Oh, I clearly don’t know my left and right.

Yesterday I walked the track and did not tell anybody. I stood there and was like, “Wait a minute. Did someone jump that?” I saw a big take-off and a small landing. There was quite some run-up. We have a 450F with 80 horsepower. That is a joke [laughs]. I thought it was possible, but then I forgot about it. Our suspension guy came up to me just before practice and was like, “Hey! Thibault Benistant told me that leap after the right and left is possible.” I was like, “Hold on, where do you mean?” We figured out that is the spot. He said, “Benistant said that he could almost make it on a 250F! I think it is possible.” On lap three of free practice, I went and jumped it. That was no problem.

Did you think it was faster than the other way? I guess it was quite a lot of work to get to, like you had to go wider and open yourself up to being passed.

No, not at all. The set-up was easy. You just had to corner as normal and shift up once. The problem was the landing. It was not really a landing – it was more like a plateau. You landed on a bit of a flat and that was a big impact. I mostly turned inside and went lower for that reason. It was a lot more of a set-up, because you had to corner back. It just took less energy. I did do it twice in moto two. I was just like, “I have no flame to go to the left. I will just keep it pinned and jumped the thing.”

The Motocross of Nations is not going to count for points, but it will be in the middle of the season. I don’t know when Arnaud [Tonus] is coming back and Valentin [Guillod] has been racing a 250F in Switzerland. Team Switzerland is okay, but would you want to do it?

No. I mean, the thing is that I love the ‘Nations and stuff. I am sorry to say that, for me, it just does not make sense. I think the value of the race will not even be half of what it deserves to be. Having that many races in the same area… We have some weeks off now. It will be bam, bam, bam afterwards and three busy months. I don’t think I want to spend my energy for that. It is called the ‘Nations but the value will not be the same. My teammates are not on a high, so I think that I would prefer to focus on getting where I want to be in MXGP.

It would be a weird thing. If you did the ‘Nations and we did an interview afterwards, you would just say that you do not care to every question. No matter if you have a good or bad day, you’ll be thinking about MXGP.

I think so also. I have a feeling many of the top MXGP riders will skip it, which is a sad story. I mean, I think that most of the people will understand. That is just how it is.