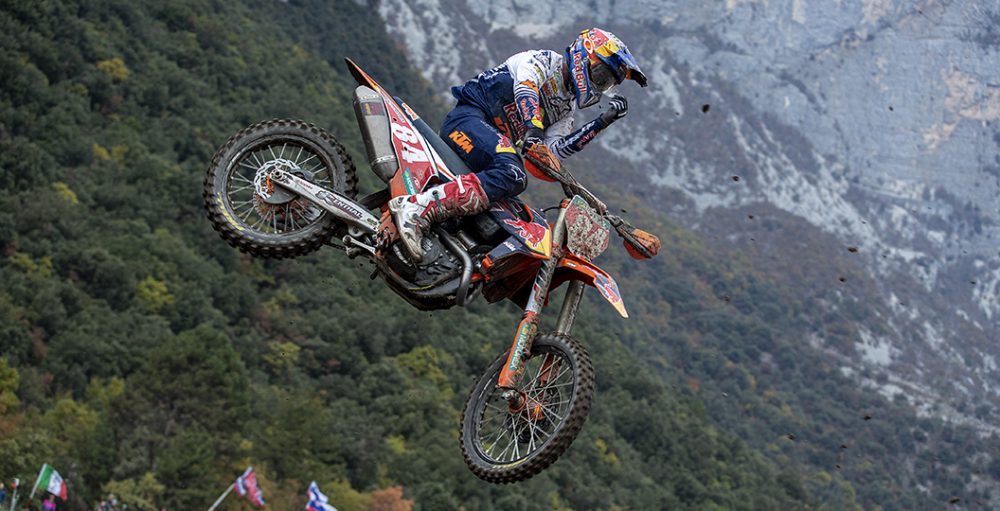 Jeffrey Herlings had a horrid time of it at the Grand Prix of Garda, the sixteenth round of the 2021 FIM Motocross World Championship, yet he only lost four points in the title race and faces a three-point deficit with 100 points on the table. Things could look so much bleaker now, considering all of the drama that unfolded alongside the Italian Dolomites. It was that chaotic! The two falls that occurred in the second moto on Sunday left him with a banged up thumb too.

Herlings talks about all of that drama quite candidly in this exclusive MX Vice interview. Herlings talks about his crashes, mentality, team tactics, thumb and outlook heading into the penultimate round this coming weekend. It certainly does not sound like he is going to stew on the event and is focused forward – something that is crucial at this point in the series. This interview was originally posted as an MX Vice post-race podcast, presented by the FLY Racing Formula helmet.

MX Vice: A very eventful day with a lot of passing in both directions. Where do we even start? You are three points down, which is successful considering where you were at with just five minutes to go in that second moto.

Jeffrey Herlings: When I was on the ground for a second time, I thought that this was a done deal. Damn, man. What I have had to go through this year is pretty incredible, but both mistakes were my own fault. First of all, I got a ‘huckabuck’ left and right. I just got shot off my bike. I got the wind kicked out of me a little bit and the guys in third, fourth, fifth, sixth and whatever got around me. I was trying to work my way back to [Romain] Febvre again, which was for third. I was close to him and I… I do not know what happened. My hand came off just before the take off. I just got it back on and I shot myself to the moon, man. When I landed, I thought… I don’t know. I just closed my eyes when I was in the air and the next thing I felt was, “Bosh.”

We are going to have to call it the ‘Herlings Leap’ from this day on.

Yeah, I landed in the turn almost! Twice in the same spot too. I saw that my guy Rick [Heusschen] was filming there. I looked at him twice and he was like, “What are you doing?” I was like, “I don’t know what I’m doing!” He was exactly there in that same spot. My bike was super bent from the crashes that I had. I had to get back on the bike, my handlebars were completely twisted and [Mathys] Boisrame kind of hit me a bit.

I think he was looking to get a contract for next year signed.

Yeah, he did a good job of that for sure. I lost some time with that. I passed him at one point and then it went quick. I went for [Benoit] Paturel, [Ben] Watson, [Glenn] Coldenhoff, [Jorge] Prado and then… Well, Tony [Cairoli] let me go by.

Thank you to Tony. I thought you really got it together at the end of moto two. I felt like you loosened up, got your head in the game and turned up.

The last six laps were good! I knew I had to. Every point counts and matters now. I am only three down, so three points is basically nothing with four motos to go. Still, you know? It’s going to be fricking interesting and I love the Mantova track – I am good at that track normally and I won the ‘Nations. I think it is a bit of an advantage when you have a good lap time in the morning. Let’s bring it on.

Did you have arm pump when you crashed for the second time? That was the only explanation that I could come up with. Maybe I am wrong, but I think you know what speed to hit the finish in [laughs].

Yeah, it is like I said. I did not have arm pump, my hand just came off. I do not know how but within half a second it was back on. I do not know what I did, but I just got whiskey throttle and the rest was history.

Hey, we talk about all your bad luck. That was a bit lucky. You bounced up and look alright. Put a point in the lucky column, I guess.

That was the actually bad luck! First of all, I crashed. That is not good luck [laughs].

We just cannot find you a shred of good luck. We can try, but it is impossible.

I will go to church tomorrow and put on some fires. I may just put the fricking church on fire to get some good luck.

You mentioned the fastest lap and I have been meaning to mention this all year. I do not feel like timed qualifying has always been your thing, but you have 11 pole positions from 15. That is dominant. That is ridiculous. For some reason, I do not feel like that is what you normally do.

I think I have been second three times and fourth once, right?

It is not bad.

It is not bad. 1.2 is like a good average [laughs]. I like the one-lap thing. I never train for it. I basically never do one-lap sprints, but I seem to be pretty good at it. I wish it would be like Formula 1 or MotoGP and then I would get a head start. That would be solid! I am pretty good at the one lap thing.

I think that I did maybe win the overall because of that at some races, like Turkey or France. The inside gate pick really helps there. On some occasions it has really helped me out.

A few people have been asking this. You were on the ‘Studio Show’ yesterday and your voice sounds a little off. Are you sick?

Yeah, I am sick. You can hear?

I’m not sure who I’m talking to [laughs].

Yeah, I have been sick. I am not the guy saying that I did not win because I am sick. I am sick, so what? I did not feel good, but yeah. Shit happens, you know?

How frustrated were you behind Prado in moto one? It cost you a lot of time. You got by him eventually and then he was easier to get around in the second race.

It cost me a lot of time. We had a good talk between motos. I was not there, but yeah. The team wants a KTM to win, so we need a bit of cooperation. Jorge is a great kid. He is lovely, but he just fights for his position. It is great, because if he would not do that then Tim and Romain [Febvre] would pass him easily! He just does the same to this teammate. Now, I think I can count on his cooperation and especially from Tony. You could see that he was my wingman all day – he just followed me. He did everything for me! Actually, I never expected that from a guy like Tony. What he did… I just have loads of respect for that.

Actually, we should talk about that a bit more. There was no KTM meeting and it was not on his pit board. Tony himself made the decision and you did not know it was going to happen, right? You will take those two points. That situation was out of your hands.

I would have done the same for him – 100%. Especially when he is like fifth in the championship and in his last few races, there is nothing for him to show. If he would have been on the podium or on his way to the win then even I would not have done it then. He is one of the greatest for a reason, you know? He has been at KTM for as long as I have been, pretty much. I was here in 2009 and he was 2010. What he just did… I think they did put it on the pit board on the last lap, but he was already looking for me. I felt like he was my wingman all moto. When I got next to him on the first lap, he looked at me and basically let me pass. I am not a girl, because otherwise I would probably ask him to marry me after what he did today.

Wow, that just got weird [laughs].

Yeah, but what he did was amazing!

This is going to be a stressful week, then it is all going to be over in a flash. Are you going to do anything differently?

I am going to go home tonight…

I am going to go to my jacuzzi first of all, sit in a nice hot bath and think about all I have done this week. I might get some sleep and then go to church first thing tomorrow.

Then go to church again after that [laughs].

I will put a few candles there and then, yeah, let’s pray! I feel healthy. I think I need a few days off with my thumb, but I think I will be back on a bike on Wednesday and Thursday. There is nothing I can do now – it is just a mental thing. We all know what everyone is capable of. You need the luck on your side and I will fight until the last gate drop and last lap. I will do whatever it takes to win this thing. I looked on Google the other day and it has been like 1040 days or something since I won the championship. I think that it’s time to win one. It will be difficult, because the other two are super motivated. You can see that. Only one guy can win, so we will see who gets lucky and wins this championship.

I was going to end the interview, but you did yourself in there. That is the first time you have mentioned your thumb, so what is the deal there?

Nothing, really. When I crashed, it is just a bit sore now.

It is not swollen, is it?

Nah, so like I said… Give me two or three days. If you saw that impact then just having a bit of a swollen thumb is pretty good. It is nothing to worry about and I think we will be back by Wednesday.

Last thing! If you could go back to this morning, is there anything that you would do differently today? I do not feel like anything that happened today was really in your control.

I would do a lot of things differently! I would make sure that I am going home with 50 points. There was the two crashes, but I do not think I did anything stupid. I was just following Tim and I felt like I was matching his speed. I was good where I was at and we were gapping to third place. I don’t know. I wish that I could have seen things differently, but it is like it is.