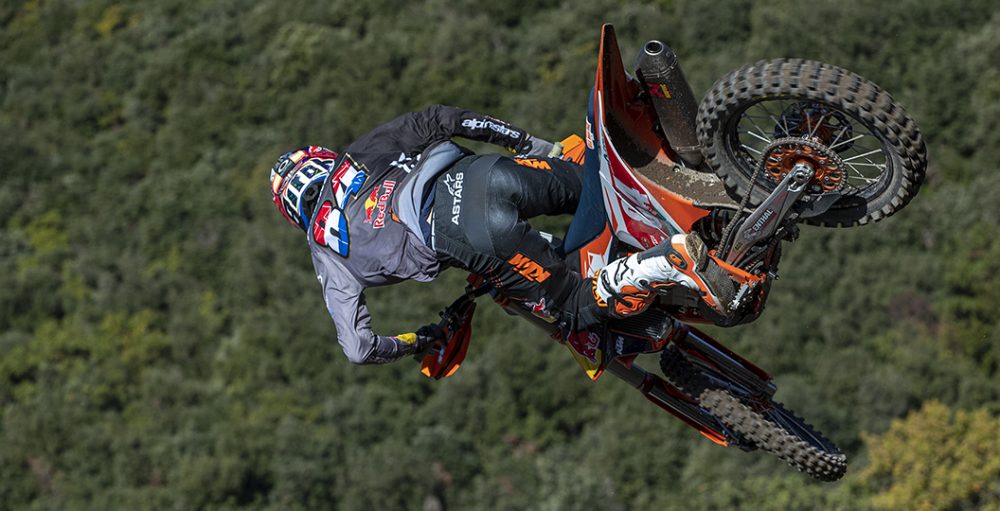 Jeffrey Herlings entered the Grand Prix of Pietramurata, the fifteenth round of the 2021 FIM Motocross World Championship, with an advantage of twenty-four points. It was like a breath of fresh air for him – he finally had an advantage that gave him some breathing room to work with. Unfortunately, that did not even last a lap in the first moto. A crash in the first turn forced him to retire and that advantage turned into a one-point deficit in the blink of an eye.

Herlings was able to return for moto two, of course, and overcame a lack of bike time to post a respectable fourth  for eleventh overall on the day. The result put him back in the championship lead too; he is just one point ahead of his closest rival with three rounds to go. Such an intense title fight is rather unique and Herlings offered up his perspective in this MX Vice interview on Wednesday evening. This chat was first posted as an MX Vice post-race podcast on Apple Podcasts and Spotify.

A weird day that would only be experienced by you. I have seen so many first-turn crashes where riders bounce right back up, but this was you and something random happened. You still have the red plate. You could argue how much it really means, seeing as there are three points in it now, but you do have it. It could be much worse.

It could be much better too [laughs]. You know, what can I say? I just slid over and wanted to get straight back up to leave. Someone ran over my bike and the rest was history, mate.

When I went up, I was like, “Oh shit. Let’s go.” I knew I could still get somewhere around fifth place.

I saw in the video that you looked up before you even looked at your bike. I thought you did that just to assess the situation a little bit.

Yeah, definitely. I thought that seeing as it was the first moto, where everyone is still a little bit cold, I could get to the top five or somewhere near there. I saw that the handlebars, gas cable and clutch lever was broken when I picked the bike up. I thought, “Shit. I am not looking good, man.”

In that situation, what do you do between races? Did you even watch the first race? Were you stressing? Did you try to watch MX2 to see how the track was developing? How do you play that?

Nah, things like this happen. It just only happens to me, for some reason. I walked off and saw that it said “84 out [of the race]” on the HRC pit board. I would have done the same with my team, like when Gajser had that thing with his collarbone. I would want to get informed as well. I think that is kind of normal. It is just devastating. I have four zero scores and I could not do anything about all four. I got landed on, first of all, and now someone ran over my bike. We came out healthy and still have the series lead. It is going to be interesting now! Nothing can go wrong for any of us, I would say. One more DNF now would be even scarier. I am looking forward to the last few races and apparently it is going to rain on Sunday, so then hell is going to begin again.

This is the thing though. Everyone is saying how stressful this is, with it being three points across three riders. I think that the second you start getting stressed, all someone has to remind you is that you have missed four motos whereas they have scored in every moto. That is your reassurance and they do not have that.

I know, but that is what will make me cry if I do not win this championship again! It is like it is just not meant to be. I still have faith and believe in it. I mean, I am still the guy who is leading. I have won the most motos and won the most overalls, so I do not see a reason why I cannot win this championship. Things just need to go my way a bit now. I should stay away from trouble. The rest of the guys are strong though and between the motos I did watch it.

I was just like, “The worst possible thing that could happen is that they finish first and second.” The thing is that I did not ride from 11:00am this morning until 04:00pm. I was ice cold going into that moto and did not see the track. Yeah, it was super slick. I had arm pump like crazy too, so that is why I was not my usual self. I just could not push. I did not do anything for six hours and then ‘boom’ I had to go into there ice cold. It is going to be interesting.

I was very impressed with your moves in the first two turns in the second race, as your start was not the best. You turned a twelfth place start into a fourth or fifth. Your race craft shone through.

I knew I had to get to the front. From the second lap, it was so slippery and I got some arm pump. [Jorge] Prado and stuff are known for great starts. Even Tim [Gajser] and Romain [Febvre] get good starts. It is not like Prado though, where they are constantly taking holeshots. Yeah, I just hope that it stays dry for the next races. It is going to be such a gamble if we get mud. It could go your way, but it could go towards the other guys. Like I said, I do not know what to expect for the next few weeks.

You went closer to the inside for the second race, which was a defensive move to stop your throttle from getting run over again. Do you think that’s going to be the move from now? Will you think about playing it safe a little more?

Depending. That Mantova start was pretty good from the inside. I pulled two holeshots from the inside, I think. I was racing the MX2 class and the entire field was not there. The start is pretty safe on the inside there. Tony [Cairoli] took the holeshot from the middle here. Febvre and guys were on the inside in the first moto and took good starts, so it can come from anywhere as long as you are there. I need to be somewhere in the top five, because passing is difficult on this track and everyone is fast at the front. We will see.

Three riders, three rounds and three points. You are a competitive guy. You feed off competition. Game on?

Yeah. It is game on. There is a lot on the line. I have not won a championship in three years and it has been five or six years for Romain. I do not get this chance 15 more times nor does Romain. Tim is the guy who has to defend. If you look at all of the results then, yeah, I have been the strongest and won the most. I have been the fastest on most occasions. I am only leading by one point though, so it is going to be game on.