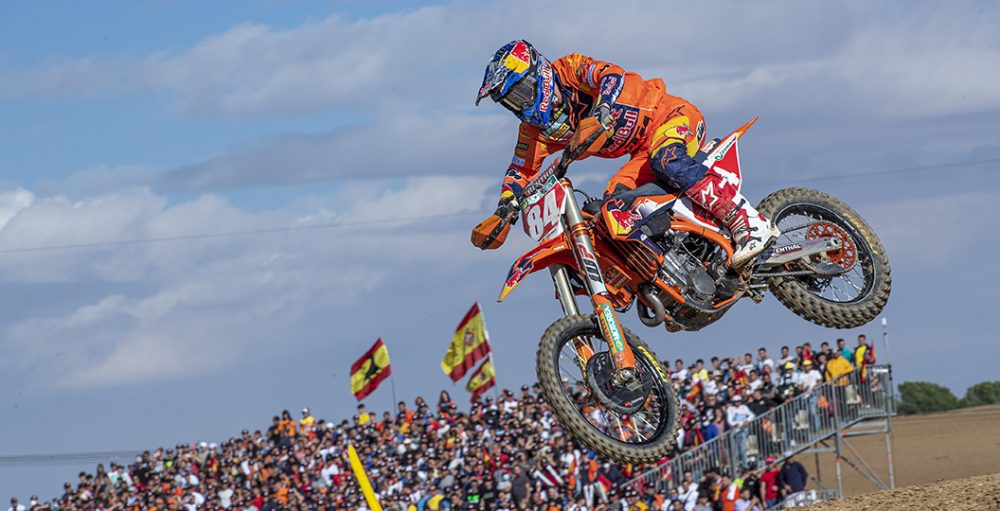 The Grand Prix of Spain was going to be a pivotal event for Jeffrey Herlings, as the man-made layout arguably suits his fiercest rivals better. Herlings prospered though, just as he has done so many times before, and secured his ninety-sixth Grand Prix win, a feat that extended his championship lead to twelve. It wasn’t all plain sailing for Herlings though; he struggled early on in the first moto and then had a scary incident with Pauls Jonass over the finish line in the second moto.

Herlings discusses all of that in the MX Vice interview below, plus he offers intriguing insight into his bike set-up. Herlings’ mechanic has to remind him to use third gear on a majority of laps at each Grand Prix and the reason for that is fairly simply – he forgets to shift. The fact that his engine characteristics are similar to that of a 250F is an interesting revelation as well. This interview was first posted as an post-race podcast on the MX Vice network, presented by FLY Racing, on Sunday evening.

MX Vice: A good day for you. You got your championship lead to twelve points and got your ninety-sixth Grand Prix win. It started off shaky – I was a little worried – but it came good in the end.

Jeffrey Herlings: Yeah, it was. If you asked me this question on the second lap of the first moto then I would have been like, “Oh, this is going to be a tough weekend.” I was fastest in time practice and my start was not too bad in the first moto, but I was too slow in the first turn and the second turn was also a mess. I was back in like tenth. I worked my way up to third throughout the moto, so it was not too bad. I almost lost the red plate at that point. I had a much better start in the second moto, I was fourth, then I managed to pass Pauls Jonass and Tim Gajser straight up, then obviously Jorge [Prado]. To go 3-1 on the day and get my ninety-sixth Grand Prix win was not too bad.

Yeah, actually, the start itself was not too bad. The thing was that the start straight was super long, as you have probably noticed. The bike set-up is made for a little bit of a shorter start straight. You could see at LaCapelle that the start was like thirty or forty percent of this one. I think that my starts are going to be better at Arco, but we were struggling a bit here with the super long start straight. There is a lot of variation with the engine. I ride with a pretty mellow one and sometimes you have to lose a bit for the start to have a very nice rideable engine. I just get in trouble when it is ripped really deep and long like here.

The first moto was a bit slow and steady, then you saw Prado in the distance on the last lap. You uncorked another second or two on that lap. Did you know that you had that in you during the moto or did you surprise yourself?

Yeah, I was super surprised. I knew I had to keep charging, because I let me head down a little bit sometimes. It was the same at Teutschenthal. If one of those two or three riders ahead tip over then I may not be there. I just keep pushing now and it actually happened [when Tim Gajser crashed]. I got paid back for the energy that I put in – I was super happy to gain one position at least. I do not know if it gave me the overall, but it helped.

What is your deal with third gear then? Your pit board says “third gear” at every MXGP round, so do you use it too much or not enough?

Not enough! I forget to shift. That is why I am so good on the 250F. I still practice on a 250F some days and I match the speed that I am on a 450F. That is what I said, my bike is really mellow and I can really open that bike. It feels a bit like a 250F at times [laughs]. When you get such a long start straight that is so deep, then I am struggling. We have engines with way more power – it is just my own decision to not run it. I am fighting the bike more, whereas now I can just enjoy the bike and track. The bike is great to ride.

How sketchy was the finish jump with Pauls in the second race?

He was close, wasn’t he?

I heard everyone scream and was like, “Oh. Not again!” I saw the replay on television and it looked sketchier than the Prado thing.

Yeah, but I do not understand. When you are behind… It is the third time this year. First [Ivo] Monticelli, then what happened with Jorge [Prado] when he cross jumped. I do not understand. When you are behind someone or just right in front of them, why are you cross jumping? Maybe slow down a little bit or whatever. Fuck. I do not know what to say, because that would have been my third crash. I feel like I could not do anything about it too, because I was in front of him and he scrubbed really close to me. Luckily, it is all went well. End good, all good. It is not the first time it happened, because I remember that he jumped onto the back of me in Argentina like six years ago.

Last thing. You have done a lot of races in a row, including the ‘Nations. You had the Prado thing that dinged your leg up. How are you feeling fitness wise? Is the slog getting to you?

I was speaking to my guy, Ruben [Tureluren], this week and I was like, “Damn, we are halfway through October. I cannot believe that we still have five races to go.” The season is over in like three weeks! Why have I got the feeling that I am in August somewhere? It is crazy to know. It is almost a done deal, especially with that Italy thing. With three rounds in one week and then Sunday, Wednesday at Mantova… It is going to go quick.