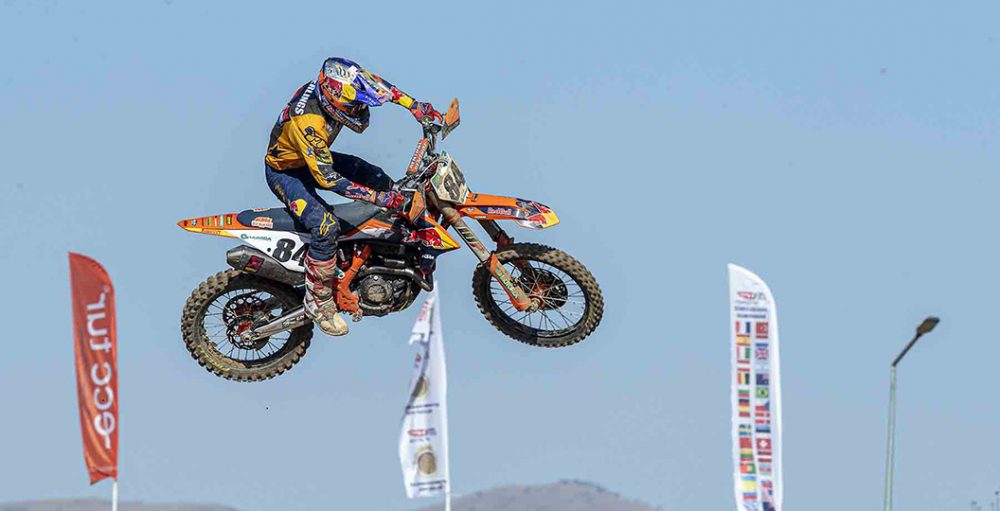 Jeffrey Herlings remains undefeated in Turkey. Another victory at the Grand Prix of Afyon, round nine of the 2021 FIM Motocross World Championship, helped him cut the deficit that he faces in the series standings down to 34. It has gone from 51 to 34, so progress is being made. The fact that the next round, the Grand Prix of Sardinia, is going to be held in the deep sand should serve him well – the gap should be below 30 fairly quickly.

Herlings discusses all of that in this exclusive interview from the Grand Prix of Afyon; he has interesting thoughts on his bike set-up, the points, Jorge Prado and Riola Sardo. It is rather interesting how he made a point to state that he does not want enemies on track, only friends, as he cannot afford any drama. A sign of how much he has matured in the last couple of years. This interview was posted as a post-race podcast, presented by FLY Racing.

MX Vice: Another Grand Prix victory, making it two in this little trip and four in Turkey. Somehow you are undefeated at this track. A successful trip, I think, as you gained points both times and the gap is coming down. It is probably slower than you would like, but it is coming down.

Jeffrey Herlings: We came from 51, heading into Lommel and being very unfit, to being 34 right now. In three races I have made up like 15 points – five points each. If you divide that by seven more races then we are there! No, just kidding. We have to really put our head down from now on. I think that a few tracks will suit me a bit better. Sardinia is a track that I really like and France is a track that I like. Teutschenthal is not my favourite, but I normally do pretty well. I am looking forward to the second part of the season. I am getting in better shape every single weekend. I have already used my jokers – I cannot have any big mistakes. That is also why I just settled for second in the second moto. I did not want to go down. I cannot afford to lose big points.

Yeah, actually, what about that sketchy moment at the end of the second moto? Did it feel as sketchy as it looked because it looked sketchy?

I was really struggling with grip and the track got so blue groove. I landed and both my wheels just started slipping away and then I cased it. It went left, right, left, right and I was like, “Alright! We did not go down.” That was a lucky one. I have already had many take offs, so I actually deserved to not go down on that one [laughs].

That first moto was super intense, and I feel like you were in the worst position. You were trying to attack and yet, at the same time, you could not properly do that, because you had to defend. How intense was that and how hard is it to come down from that after the moto? I would imagine that, even mentally, that must take a lot out of you.

Yeah, definitely. I wanted to attack because I felt I had the speed of Romain [Febvre]. I had [Tim] Gajser breathing down my neck, at the same time, for the full 35-minute moto. It was a tough place to be in. The track was so easy to make a small mistake on. If you missed one berm, braking point or turn then the position would have been gone. It was tough to be in that position. It was the same in the second moto, for the beginning part of the moto. I was just behind Jorge [Prado] and Tim was pushing in the back. It was the same!

That second moto, I felt like you needed to pass Prado before Gajser got you to put Prado between you and use that breathing room. Did you know that throughout the race?

I knew, but Jorge did me a little favour on the start. I did not want to put down anything dirty. I respect Jorge a lot…

Woah, woah, woah. Did you a favour on the start?

I do not know if it was meant to be, but he opened a little gap so I could turn inside. It was not planned or anything like that, but for some reason he helped me out a bit in that second moto. That was why I could turn inside. I felt like with him doing me that little favour, even though he probably did not want to do it, I did not want to run him down or take him out. We are in the middle part of the season and I prefer having people for me instead of against me, so I do not want to clean anyone out or ride dirty. I want to try to pass them clean and straight up. I respect anyone in the field. I am looking forward to the second part of the season and it is still a five-man battle for the championship. I mean, Gajser is looking the best right now. We, as KTM boys, are trying to hunt him down.

You talked about how you got in late on Saturday and use the time in between these races to do some testing or start practice. What did you do, what did you learn and what did you do differently today?

We changed a bit on the mapping on the RPM. We found out that we need to start with a bit more RPM here, just because of the height. I think we are at 1000 metres or whatever we are. I don’t know. The awful starts on Sunday were my own fault, but today they were much better. I was actually drag racing with Jorge in the first moto until halfway up the straight when he just got me. I had a little favour in the second moto, but the start was still good. If I had really messed up then I would not have been second anyway. It was alright. I was a bit off with the speed today – I had really good speed on Sunday. Two GP wins – I think we should be happy.

Last thing. We are going into Riola now and I am guessing that if you gain two points there then it may be a little bit of a different story. That must be marked on your calendar as one that you really need to capitalise at.

It depends on how they put the track and if they put the track rough. When the track is really dry, it is hard to get it rough. They need to water the shit out of the track, I would say, to really get it rough. You know, there is not much riding going on. Hopefully they leave the track from Saturday. Here they ripped the entire track and I do not even know why they did it. I think that the track was better on Sunday. It is hard. With the heat today, it is hard to get it dialled in. The track gets hard and slick at some point, then if you put water on it it is like ice. I understand that it is hard for the track preparation guys to have it perfect in every scenario, but I think that it is a bit better for Riola. Hopefully they water it a lot and leave it on Saturday night, then we will get some rough racing. I normally like that.

You are actually the best guy to answer this. A few guys have told me that everyone thinks that Lommel is the toughest Grand Prix, but that will be Riola. Are you ranking Riola as a rougher and tougher sand race than Lommel?

Depends if they water it! People say Dunkirk is the toughest one. I have been there when it has been raining and those bumps are like… It is literally like, “Now you see him and now you don’t. Now you see him and now you don’t.” I went there in the summer one time and it was just flat, because it was just dust. It really depends on how much they water it. Looking at the weather, they should water it a lot. I do not think it is going to be super hot, but it will be close to the 30s I would say.