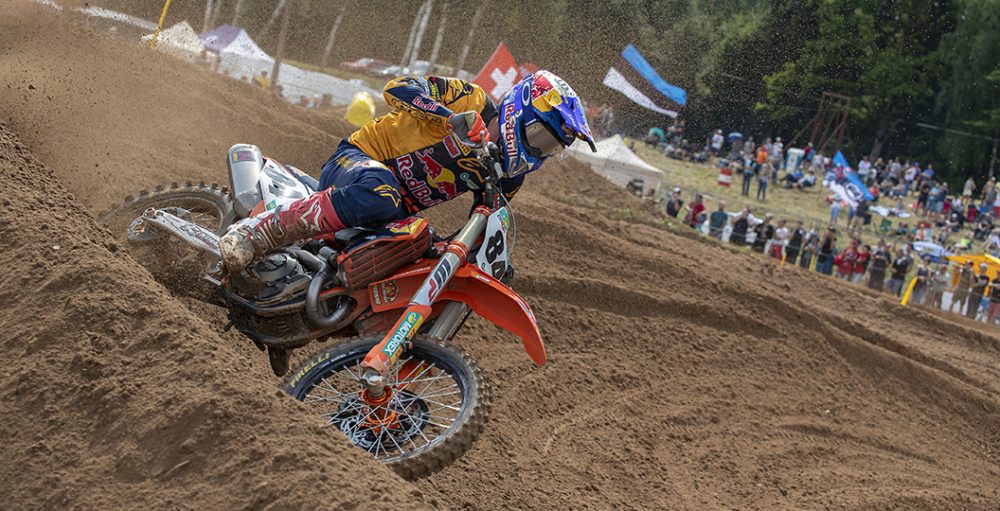 When Jeffrey Herlings confirmed that he was going to race Grand Prix events in Belgium and Latvia, fans in all continents turned attention to the FIM Motocross World Championship. Herlings was undertaking quite the challenge and success seemed unlikely. Now, with the two rounds in the rear-view mirror, Herlings has two more trophies in his cabinet and has gained eight points on the current championship leaders. It could be so much worse.

It has not been perfect though, as some points were left on the table at both Lommel and Kegums. Herlings could be even closer to the red plate, believe it or not! The frustration that comes with that is expressed in this exclusive MX Vice interview direct from the Grand Prix of Latvia. Herlings talks about his shoulder blade and pain threshold too, as well as a new ailment. Another rider struck his foot in the second stint at Kegums and he was limping quite noticeably prior to this interview.

MX Vice: Today was good, looking at the bigger picture. You only lost one point to Tim [Gajser] and you should not even be racing here. Looking at the smaller picture, that being the overall win, losing it on the last lap had to sting. Still, you picked up 43 points.

Jeffrey Herlings: Yeah, definitely. I know I should not even be racing. When you are in this position and have four turns to go, and you just throw it away all by yourself, I really feel like an idiot. It could have been MXGP win 92. Could have, would have, should have. I do not know how unlucky you can be. Someone ran over my foot afterwards, which hurts. I think it is alright. I do not know what to say, man. I just feel so unlucky. The good thing is I did it by myself – I cannot blame anyone. What a dumbass crash.

Is this the same foot as… Well, two years ago in Latvia?

Every year someone either rides over it or hits it. I hit it or whatever. I think it is a bit swollen, but I do not think it is broken. By now I know how broken bones feel.

Moving onto the shoulder. How was the pain today compared to Lommel? Was it more manageable? How would you rank it compared to last week?

Way better. It hurt a bit, especially at the end of the second moto. That was not an excuse though. If I was healthy then I would have gone 1-1 for sure – that is not a thing. The riding was good and, like I said, that was not an excuse. We just messed up ourselves. Coming back after Oss… What happened there never should have happened but coming back after missing three motos and having a broken shoulder blade, being over 50 points down. We made it come closer, to I think 43 now. We came here for damage control and gained some points. Everything is still open with 11 rounds remaining, especially if the calendar stays the same. It was just an average day, at the end of the day.

I was wondering whether that crash in the second moto was because of the strength in your shoulder or whether it was just a normal crash.

I do not know how it happened. I was having some problems with lapped riders, as you could see, and I lost [Jorge] Prado’s rear wheel. I was like, “Let’s roll out this lap, get the overall, be happy and go home.” I was down before I knew it. I tried to leave behind Tim [Gajser] but the bike stalled, and it was super-hot, so I could not get it started straight away and had to put it in neutral. I was wrong and crashing. I should have never crashed, but the bike was amazing and KTM did a great job. It was just up to me today.

You were so fast in sector one, which was just after the finish, all day, like half a second quicker than anyone else. I could not see it from where I was, but do you have any idea what you were doing there?

I saw a lot of guys go outside after the finish jump in the second moto, whereas I was still going to the inside. I was good in the waves too. I think that was where I was gaining a bit of time. It was so difficult to pass, because it started raining and there was only one dry line. Jorge was riding good – his pace was alright and he had good speed. I just did not know where I could pass him. He is not the easiest guy to pass anyway [laughs].

He was a bit aggressive today, like on lap one of the first moto in the turn after pit lane.

Yeah, but when you got out of the dry line then you had to go into the slick line. I did not know where I could have passed him. The first moto was dry and there was grip everywhere – it was perfect. The second moto was a little slick with the rain, but it is what it is mate.

Have you had any scans on the shoulder this week to see if it is getting better or maybe even worse?

I did not. It did not get better [laughs]. I think that it did not get worse, because I had less pain today. That was pretty positive.

Last thing! These two rounds are done, so it is time for a month off. You gained points over these two rounds, so mission accomplished. You do not sound happy, but happy?

No, because I should have won both.

It should have been 1-1-1-2 at minimum and two overalls. I threw it away myself twice. Last weekend and this weekend again. I don’t know… I don’t know. That is not the normal Jeffrey Herlings, throwing overall wins away. I did the same here last year – I also threw a GP win away with a lap and a half to go. Something to work on mate. We have some time, so let’s hit it.