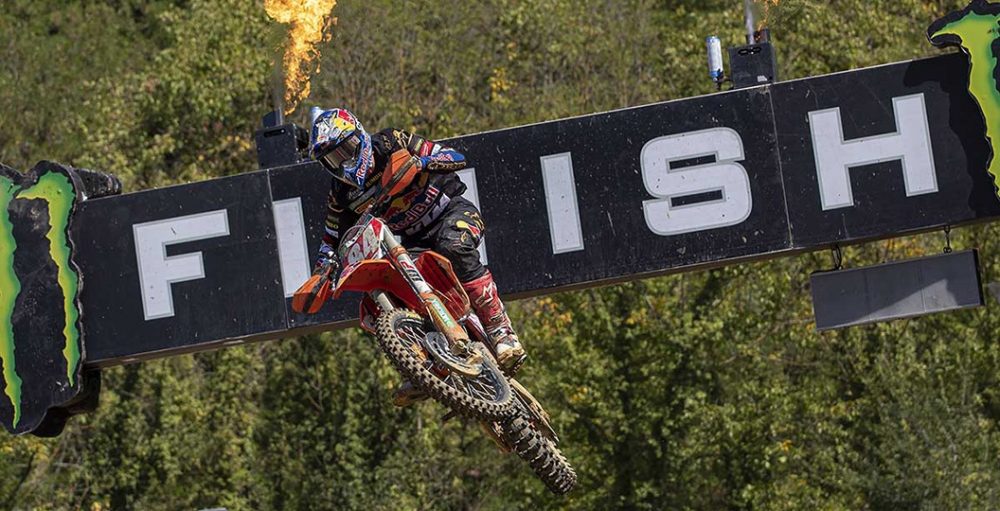 Jeffrey Herlings may not have been the fastest rider at the Grand Prix of Italy, Faenza 1, but he still swept both of the motos and extended his series lead to 60 points. An incredible figure after just six rounds of the 2020 FIM Motocross World Championship. What did Herlings make of his day and such intense fights? MX Vice editor Lewis Phillips caught up with the Red Bull KTM Factory Racing rider in Italy to discuss all of that. There is a lot of information below.

MX Vice: 1-1 on the day, but you have gone 1-1 loads. I do not think that’s the biggest story here. I think that the story is everyone was fast today and there were a lot of guys who could have won. You being you though, you found a way to make it happen and put a load of points on the rest of the field. That is kind of why you are you, if that makes sense.

Jeffrey Herlings: That’s some good words, mate. Thank you. Last year I knew if I messed up a start I could still get to the podium positions but here, if I’m not there within the top five then it’s going to be very difficult. I made it happen. Two good starts. Hopefully I can do it again Wednesday and Sunday. It’s difficult to pass. I have some more experience now on the track after riding today and yesterday, so hopefully by Wednesday we’ll be a bit better again.

I don’t see any changes. For the championship we did good things. Normally I would say there is a lot of racing going on, but we don’t know. For sure on the planning there’s a lot of races, but in corona you do not really know what is going to happen. If the plan is going to go like it’s supposed to be, then there’s still a lot of races to go. I thought today was a good day.

You saying about your starts reminded me. They were a million times better today. Did you just hammer those in the three-week break?

Well, they couldn’t be much worse than what they were. Yeah, we did a lot of starts. The first moto I was a bit lucky. It took a long time for the gate to drop. I kind of went, then I braked and then the gate dropped. Then it was between [Ivo] Monticelli and [Jorge] Prado with first and second. They kind of opened the road for me. I was a bit lucky on that one. In the second moto I took a good start, so it was good.

Yeah. I was waiting and waiting, but at one point I felt Seewer coming really close. I was like, “Okay, now it’s time to go. I did not have time to wait anymore. Luckily I made it happen just in time. Then Prado faded a bit, because then also Seewer came along with [Antonio] Cairoli. Everybody just got one position up, and Prado went back. Jorge did a good job. When he’s leading and he can be consistent with nobody in his way, he is very good. He’s one of the biggest talents we have ever seen and then you get what you see today.

Your plan was pass Prado and then hammer down, because both motos you passed him and immediately the screens went green. You obviously always had this in the back of your mind.

Yeah, definitely. Seewer kept it honest until the end though. He was good, man. He can ride. The guy has some heart. He has some speed as well. He keeps going until the last lap. He’s like a Rottweiler.

He’s not the same guy you raced in MX2, that’s for sure.

You kind of alluded to it before, but it’s got to be tough to pass around here. I just said to Jeremy actually, I felt like he could have ran with you fine. He was doing that, but there was just nowhere he was going to be able to pass you unless you made a mistake or a lapper helped him. It’s impossible to pass out there.

Yeah. That’s why you need to make a good start. It’s the same for everyone. It puts a lot of pressure on you, because the speed is so similar. We’ll see. We’ll go out and do our best again on Wednesday, and if we go home with the same amount of points we had a good day.

Do you actually like this track? Especially on a 450F, I’d imagine it’s quite tight in spots. Obviously, it’s proper old school.

It’s fun when you are leading and out of the roost, but when you have a start crash and you have to work your way up to the front then it’s not a fun place to be at.

I’ve had a few people ask me a random thing, why did you do the ONK last weekend? It was a sand race. This is the complete opposite. I presumed and told everyone that you missed out on pre-season races before Latvia, so this was just another opportunity to get your race count up. What was the reason for that?

Actually the reason is because I grew up 100 meters behind that track.

I heard you lived near that track.

I lived honestly… Like if I would wake up I would see the track, kind of. It made me what I am. I started riding when I was like five years old, every Wednesday and on the weekend. Now they had the first race I was like, “It’s nothing compared to Faenza.” The bumps were like you saw: You don’t see them, you see them and then don’t see them. I was going to go practice anyway and to ride on the weekend at a hard track, even in The Netherlands or Belgium it’s super busy.

I thought I’d better do a race. There’s some flag marshals and have a start. It was fun, because I love tracks like that. The tracks never get that rough, because of so many fast riders, and then you get completely different lines. For amateur guys, they are more slow and before every jump they gas it and they brake. It gets super, super gnarly and rough. I just had a great time. I enjoy doing it. That was why.

Obviously we know you were struggling a little bit in Latvia just because of a concussion and things like that. Three weeks on now, how much better are you? Would you say you are now 100% or getting there? Is there a massive difference?

I think what ruined my chances at Latvia was the starts. I always had to come from mid-pack or from last after a start crash. The good thing is I was always consistent. I seemed to catch up and make it to third, fourth or even to the win. Until now I have such a big points lead, because the competition is so strong and I’ve always been consistent until now. It makes me more calm, because now I know I can mess up a moto and be fifth or tenth or whatever and still have the points lead. I do not want to make the same mistake as I did in ’14 or ’15, and keep trying to win or be dominant.

Even when you are not in the right position and maybe go down or get an injury, because now if you get injured then you are done. Depending on the injury, of course, but for a big injury the championship hopes are done. Even with a collarbone break, if you have three races in a week then you are done. Trying to be smarter. Until now, it has worked. People are like, “This is not the Jeffrey Herlings we are used to seeing,” but if you look at the sheet today I’m leading by 60 points.

Yeah, in some ways this is a better Jeffrey Herlings.

For now, yes. Before it was always difficult for me to lose, but now I accept losing. I just want to go like Tony did in the past or like [Ryan] Dungey. If I finish fifth on a bad day then I’ll take the fifth or sixth and go home safe, then try to work again the next weekend or the next Wednesday. Whatever it might be now!

I could go into that big time, but we’ll try and stay away from that. We’d be here forever. We are back here on Wednesday. Anything that you are going to change with either you or the bike set-up? Have you got anything in mind where you are like, “Okay, I need to fix that!” Are you pretty happy with where you are at?

I’m happy where I am. I was struggling with arm pump for the last few races. Today was better. We changed something on the suspension set-up, which is an improvement to me. Just got to run it how we finished today.