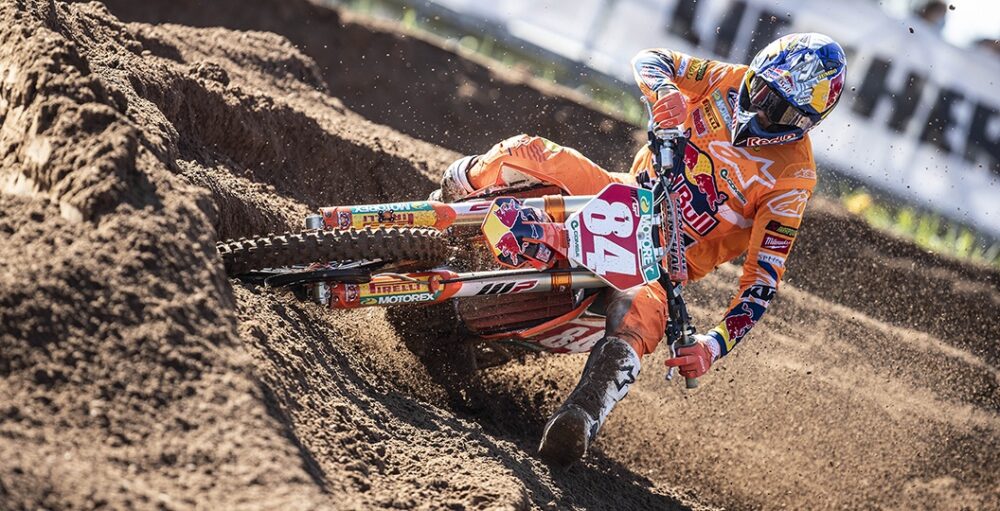 Jeffrey Herlings finished inside of the top two in just one moto whilst racing in Latvia, yet he quadrupled his lead in the premier-class standings. Funny how that works, huh? MX Vice editor Lewis Phillips caught up with Herlings following his third triumph of the season at the Grand Prix of Kegums to discuss that, the new triple header format, what is coming up and more. This one interview is packed full of information! This chat was also first posted as an MX Vice post-race podcast, presented by FLY Racing.

MX Vice: Well, it’s about time! I never would have thought it would take you six motos to get it done, but the important thing is you are back on top. Just like Wednesday, you have added another gazillion points to your championship. All good things!

Jeffrey Herlings: Yes. I don’t like to get points this way but I’ve had a lot of bad luck in my career and a lot of injuries, so I’ll take it. I got little gifts on Wednesday, but especially today. When he crashed himself, it was his own fault. Now with the bike I do feel gutted for him, because I don’t want to get the points like this. Still, at that time when his bike got the DNF, I was winning the GP. I wouldn’t have won points, but I wouldn’t have lost points either, but for now we are looking good in the championship.

What’d you think about the way you rode today? It was your one GP win in Latvia, but I think you might have ridden better on Sunday and Wednesday. I don’t know. I felt like there wasn’t your burst of raw speed today.

No, especially first moto. I was struggling with arm pump. I don’t know why. I was really struggling. The track got choppier and choppier throughout the days. I wanted to play it safe, because I saw some nasty crashes. [Glenn] Coldenhoff won the first race. Tony [Cairoli] won the second one. I won the third one, but I think I’ve been the most consistent over the six motos with a 4-4-3-3-4-1. Just a shame about the second moto last Wednesday, because I would have won the GP as well. Would have, could have and should have. A lot of talking on that side, but I am going home with a good feeling. We did some good things for the championship.

I’m going to guess that you’d quite like to light this first turn on fire? Apart from the last moto today, it has just kicked your ass?

Yeah. I had a rough races, but once again I was really consistent. I was okay with not winning. I was okay with being in this position. With being this consistent, it’s made me where I am now. I’ve got almost a GP lead [46 points in the championship]. Once again, there was some luck involved. It is like it is.

Towards the end of the first moto, I think maybe there was a chance you could have got [Jorge] Prado. Maybe, if you had fully hammered down, but it looked like you had arm pump. When you came alongside pit lane you were shaking out the arms a little.

Yeah. Actually I was going to go give a run to Prado, but then I crashed. I just passed Clement Desalle, then he passed me back and I wasted a lot of time on him. He was riding good though. I wasted a lot of time, but passed him back once again. Then it was the same with [Ivo] Monticelli. I finally passed him, and once I passed him I tipped over and had to restart again. I lost a lot of time with that. That probably ruined my chances of passing Prado. Still, it was okay. The complete Latvia trip could have been way better, but could have been way worse as well.

That reminds me of something I was thinking during the first moto. Do we give Monticelli the award for hardest guy to pass? That looked a little frustrating.

A couple more quick things. I know you rode between the first two Latvian races. Did you work on starts at all between the last one and this one?

Yeah! I did about 7,355 starts probably on Friday, but it didn’t help too much. Might need to do another 70,000 or something to get good out of the gate. It’s weird. I know it’s myself, because the bike is just awesome. To see Tony, Jorge and Glenn holeshot a lot with the bike. The bike is absolutely perfect. Definitely got to work something out with my technique and things like that, because I know it’s not the bike. With this bike, it also took holeshots last year and the year before. Something up to me to work on.

I’m not going to ask you about the one-day thing, because we all know you love it. We don’t need to hear that again. Three in one week though. Does that work for you? Are you feeling it more today than you would if it was back-to-back GPs?

Back-to-back we would do six races in fourteen days. Actually three races is much, but it’s corona times and everything is unclear in the world. Right now having this going on, this coronavirus, I much prefer to have the red plate, because you don’t know how things will turn out in two weeks to three weeks to four weeks. If a few countries go on lockdown, this championship might and can be over. I don’t know if I’ll be world champion then or whatever. I prefer to be leading though! Let’s keep it this way. I’m excited for the new calendar, which is going to probably pop up on Tuesday or something. I heard a lot of stories about Italian races.

We are moving to Italy. We’re going to be full-on Italian, by the sounds of it.

I don’t know the tracks, but hopefully they keep it fair so they don’t do only sand tracks or only hard-pack tracks. I don’t know how many races. I hear something like ten. If they do five sand and five hard, it will be good.

Obviously you had the concussion before we came here. Once you get home, will that be the first time that you have been able to hammer down with your normal programme since the concussion?

Basically yeah. I was just on the bike one week before the Latvian races. Maybe that played a part in it, I don’t know. It’s not that I really could say I improved over the last three races, but I definitely have some things to work on. I showed it with a good start in the second moto last weekend and this weekend, that it’s much better. I think that’s just the thing I need to work on. Once again, I think once I have a few good starts again it’s going. The same with confidence, it comes and goes.