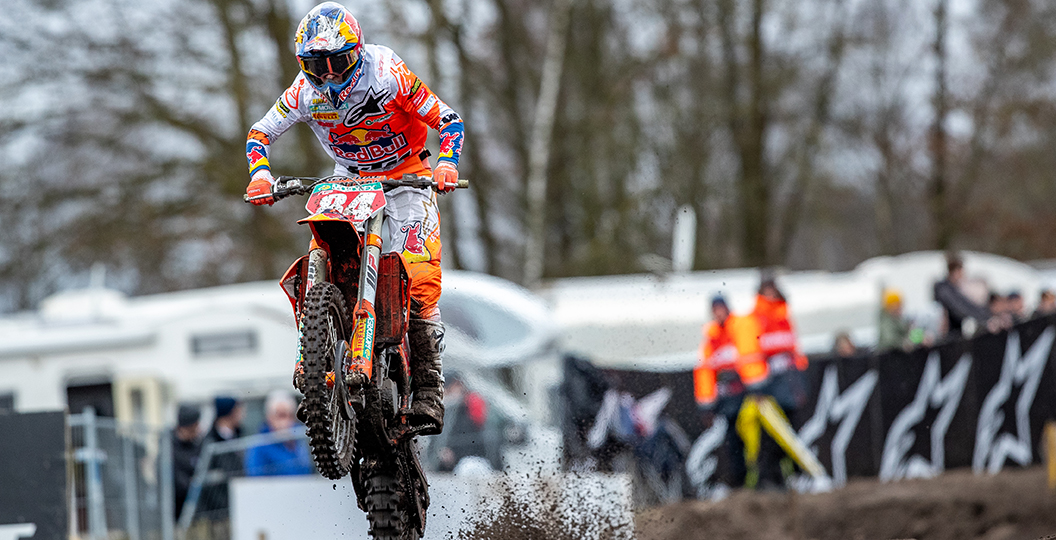 Jeffrey Herlings has had a perfect start to the 2020 FIM Motocross World Championship, as he has won the first two races on the twenty-event schedule. Herlings has not had things all his own way though – the Grand Prix of The Netherlands was far from easy! Herlings explains how the event unfolded, what he could have done better and more in this exclusive MX Vice interview from Valkenswaard.

MX Vice: You won the overall. Is this going to be one of those times where, even though you won, you are going to tell me that you were not very comfortable, it wasn’t very enjoyable and it was all a bit weird?

Jeffrey Herlings: It was a bit weird, because of the weather circumstances. The first two GPs we have had and raced were not normal, because of the track and weather conditions. The second moto at Matterley Basin, with the sunset… I don’t know about all riders but it was hard for me to really see. Then today again a bit of a mud fest and the track shaped up really weird.

It was different than any other years, but racing is racing and you need to be good in all weather circumstances. It’s the world championship and you need to be good in many different ways! It’s not dominating form, obviously, but I’m racing against the best guys in the world. I definitely can’t complain. It obviously happened. We had a 1-2 and a 2-1. Two GP wins, so it is still two out of two for the moment.

Halfway through the first moto you turned it on a little bit, and started to cut into the gap [Tim] Gajser had. I feel like you could have won that one, but the second half of the track was killing you. You were gaining seconds on him in the first half each lap, and then you’d just lose them in the second half. Is there anything you can kind of point to?

Yeah. On the waves, I think it was section three if I am right, he doubled in. One of my guys told me between the motos, so in the second moto I also jumped in. That’s where I lost it. He carried so much speed throughout the waves and definitely gained a second or more. He was really good in sector three or four. I couldn’t really close up the gap and at one point I was like, “Yeah. Second is good for now, because the second moto will give you the overall.”

Once you found out that he was actually doubling into the waves in the first race, were you like, “Damn! That was possible?”

Yeah. I knew it was possible, but I didn’t know people would do it. I only knew it after the first moto when my mechanic said he kind of doubled in and gained a lot of time… My bad [laughs].

The second moto was much more normal. It was kind of business as usual for you at Valkenswaard. A good start and led from the front. Never too much trouble, huh?

Yeah. Second moto was a bit more comfortable… I was feeling a bit better. Holeshot, and then I could more focus on my own riding and could really focus on myself. In the first moto I had to pass Jorge [Prado] and then it was raining, and you have some problems with your vision when it’s raining. I want to say Oakley did a great job with the roll-offs. I was one of the only guys, but at least I didn’t have to come in to change my goggles. The goggles situation was perfectly fine. Still, the visibility with the rain is not that easy.

There has been all this talk in the off-season about you starting slow and not wanting to hit your peak too soon. Do you feel like you have lived up to that? Do you actually feel like your peak is coming around Spain, Portugal or France?

Hard to say, but I feel like I’m not a hundred percent yet. I’m a bit slow in the beginning of the moto, and I feel like I still need to… The opening laps are a bit too slow for the moment, but we’ll definitely work on that when we have some more time. I think there is still some work to do, but it’s just race two out of twenty and there’s still a lot of racing to do for the rest of the season. Soon we’ll probably have a lot of time, with Arco being changed.

After Argentina there are four weeks off, I believe, and then hopefully the weather is a bit better. Now with the cold and all the tracks being muddy for practice at home, it’s hard to work on speed laps and things like that. It’s more like you just want to do a 35-minute moto to get home as quickly as possible because it’s raining, cold and almost freezing outside. Hopefully when the weather gets better we can work on the sprints more.

We are about to enter a massive area with fans, so we’ll wrap this up. Two rounds in. You have got the points lead. That is all good. Is there one thing though that you know you need to work on, either with your body or your bike? Is there one thing that you are like, “I just need to tidy that little thing up?”

Actually I’m super, super happy with my bike. I think over the wintertime we increased a bit and we made the bike a bit better again, by a small step, so I’m happy with that. I think now it’s just on me. I think the bike is absolutely amazing. It’s great. I don’t really want to change anything on the bike. Suspension-wise we are good and engine-wise we are good. Starts have been good so far. With bike set-up I’m super happy. I just need to work a bit more on the intensity in the beginning of the motos, I think.

Compare your fitness level and the way you are pushing yourself off the bike to 2018. Are we at that kill-yourself level?

We are getting close. I want to still build up throughout the season, so I don’t want to come in already on the limit before the first gate drop. I feel like I have still got some time to gain and become a bit better. It’s hard to say. The first two races have been GPs, but not like a normal circumstance because of the weather. Once we get to normal races we can see where we are really at.