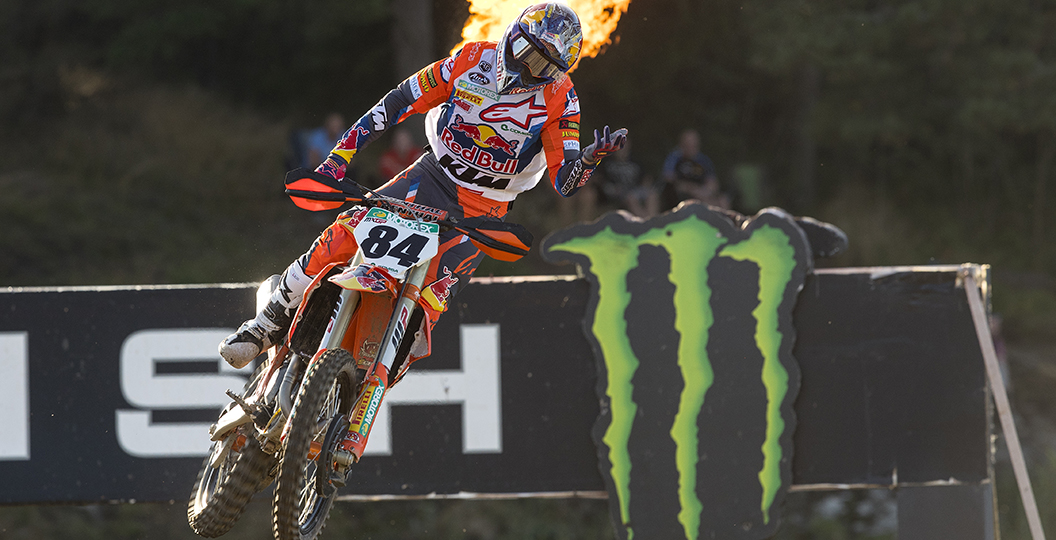 For the first time this term, there is a post-race chat with Jeffrey Herlings. Herlings returned at the Grand Prix of Sweden over the weekend, much to the delight of his legion of fans, and immediately made quite a splash in the premier class, as he won the qualifying heat and led countless laps over the weekend. There were a lot of positives to take from the event, which is evident in this exclusive MX Vice interview from Uddevalla.

You survived the sighting lap! Two of them as well.

Look at you, surviving weekends…

A win and a fourth too, and arm pump.

Is that it? Interview done? We have summed it up. I think it was good. Speed was good and, look, you decided you were racing here on Wednesday. Really, you should not have been here. To come away with a qualifying heat win, holeshots and having shown good speed… It’s good.

Yeah. We actually decided… Even Thursday morning, I was still riding. I spoke to my mechanic. I was kind of mentioning Glenn [Coldenhoff]’s speed in practice and I was like, “I think he is the fastest guy around now in the latest races.” I was like, “It’s just practice.” Today you see in the race rhythm… I don’t have race rhythm yet, but to come out with a qualifying win was totally unexpected. That again put some pressure for today. I did not have any pressure, but especially in the first moto… We just have a small warm-up in the morning, like fifteen minutes.

It’s just a few laps and then I wasn’t really warmed up, especially because I didn’t do any races. I just had terrible arm pump and after ten minutes couldn’t hold onto the bike. Still survived for another ten, but then I so blew up and then I didn’t ride well anymore. Even my front wheel washed away, then they rode over my bike. They broke my rear brake. My rear brake didn’t go anymore. I was just like, “Whatever.” It didn’t make any sense to take any risks. I didn’t want to take risks, so then for moto two I was like, “I don’t want to pull a holeshot.”

Even though I did want one, I’m just not fast enough and things like that. In the second moto I started around tenth and then worked my way up to fourth. [Romain] Febvre crashed out though, but I still think it was good training and a good weekend. It went better than expected besides the first moto. Even though I led for twenty minutes… Don’t talk about the second part. Totally, I think it’s been a good weekend. I didn’t make any big crashes. I didn’t hurt myself and get to go home healthy.

When you got to that twenty-minute mark in the first moto, was there a little part of you that was thinking, “Okay, there are six more laps. Maybe I can do this?” Was it more like, “Can someone pass me, because I’m sick of leading and I cannot do it anymore?”

No. I led for ten out of… I don’t know how many laps they did. Fifteen, eighteen or whatever. I led more than half of the race, but at one point when you cannot hold onto the bike it’s just getting dangerous. If I crash myself then I’m fine with it, because I decided to [push that much], but I don’t want to take any other people out. Then even though I just tipped over in a turn, [Arnaud] Tonus went over so I felt sorry for him.

He should not have crashed, but that’s racing. Sometimes you win, sometimes you lose. It was a good practice for me and I’m doing another race on the upcoming weekend, then going to Turkey and hopefully put it in at least the top five and maybe put it on the box. For sure, I still want to win a GP this year. Seeing what I can do now with less than two weeks of practice… Hopefully in three more weeks I can still fight for a GP win.

Second moto was easier, huh? Starting in seventh or whatever you could just settle in and get in your rhythm. Did you still get arm pump quite early on?

No, the arm pump was way better. I still had a bit, but always the second moto is a bit better. If you are a racer, you know. It just takes some time. I will get better every single weekend, but I did four or five weeks of riding in May and half of June. Now I have doing two weeks. Those guys have been racing since February and I’ve just done seven weeks on the bike.

You are on round three!

I’m going to take a guess here. You have been riding for what, two weeks? Zero hard-pack or a little bit more than that?

No, actually I did twice. I shouldn’t lie. Two days on the hard and I think five days in the sand or so. This wasn’t really a hard track, but not sand either. This was sketchy. It was really slippery with all the stones and stuff, but it was a good practice. I just wanted to take it as a practice.

I feel like I could have gone to France this weekend to practice, but nothing is better than this. I have to fight these guys anyway soon, so then I would have had the problem of the arm pump. That’s why I decided to come here at the last minute. I think it was good.

I feel like you crossing the finish line in the qualifying race and shrugging your shoulders pretty much summed it up. I guess the whole time you were just like, “Okay, where is everyone? This is my off-season race. Do you want to pass me?”

Today, already after a few laps I felt it [the arm pump] coming and then it’s just so tough to ride. On a sand track you can last longer with arm pump but on a hard track, especially this track, it’s so sensitive with all the small stones and very slippery. You just need to ride, ride and ride. I think in a few races from now it will be done. It was a great practice.

After seeing you this weekend, I’m feeling very, very confident that Assen is going to be spot on. Maybe you will not be one hundred percent, like you said before, but if you are already winning qualifying races…

No, I won’t be one hundred percent. If I’m ninety-five percent, then I’m good to win. Even if you check the second moto, I was only fifteen seconds or so behind the leader. For a guy like me who just like kind of came out of retirement almost and hasn’t raced in so long, I didn’t do that bad. I definitely want to thank the Red Bull KTM race team, because I just called them on Thursday morning.

They made it all possible. They still brought one bike with Liam Everts, to at least have bikes here and to put everything together. Without them, I wouldn’t have been here. A great job from the guys who still put it all together to let me ride and race. I really want to thank them for that and still want to bring the guys a win.

Put a number on it then. Fifty percent at the moment? Sixty percent? The arms are at zero, I guess.

The arms are at minus one. The riding, like sixty to seventy percent. If I could have been one second quicker now, I would have probably won the first moto. I was just not fast enough to lead, so it was kind of a train behind me. I was just not fast enough. If I find one more second, which I hopefully will do in a short amount of time, then I’m good. Now I could not do my own pace and I had to defend everywhere. They were pushing left, right, up and down. It was not nice, but it was great practice.

Germany next weekend. Do they have sighting laps there? Do we need to be careful?

He does turn up there sometimes.

Does he? Then I’m not looking forward to that sighting lap. No. It wasn’t his fault. I crashed behind the jump. He tried to not hit me, so he did a great job actually by doing that. I need to watch out on sighting laps. I survived this weekend, so that’s good.