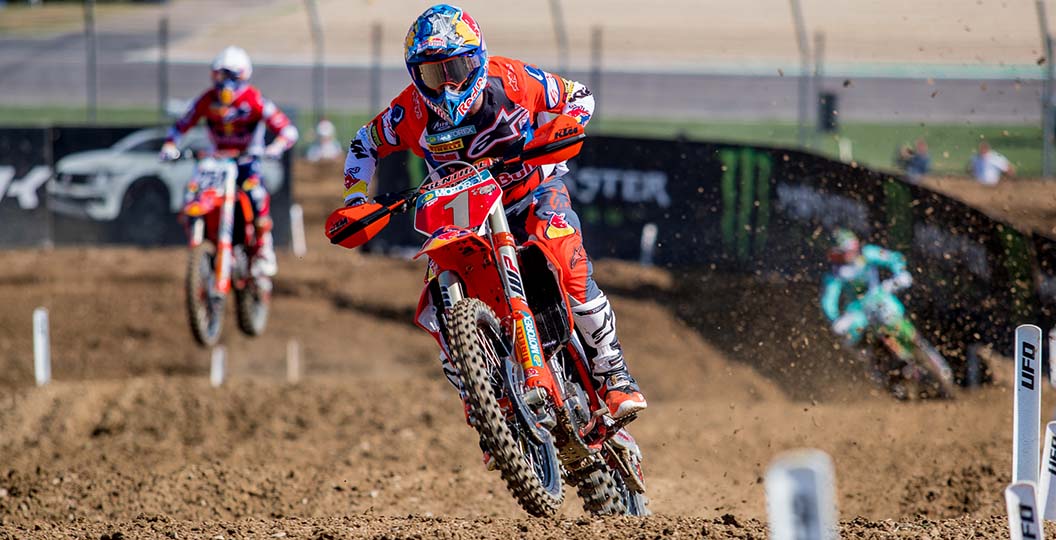 Jeffrey Herlings capped off an unbelievable year in the FIM Motocross World Championship with a clean sweep at the Grand Prix of Italy, which was hardly surprising. Herlings opens up about that in this exclusive interview from the final round, then looks ahead to the Motocross of Nations as well. There are some laughs in here too! This interview was originally posted as a podcast elsewhere on MX Vice.

MX Vice: The job was done two weeks ago. You had already won the title, but it did not seem to make much of a difference. Aside from the holeshot in the first moto, I think you swept everything.

Were you ever on your limit out there? Obviously, like I said, the job was done, so did you come into this weekend thinking that you would take what you can get? Was that playing on your mind a little bit?

You noticed it from that point of view then it was just a more enjoyable, more fun weekend because the pressure was gone two weeks ago.

I’m guessing that the cheat day that you had after Assen was still helping your mood a little bit as well? Are you still feeling the meat sweats from that?

Yeah! I gained five kilos, dude. Unbelievable! I ate like a pig, but then after that I barely ate for three days and trained. Jumped on the cycle, three or four hours, just to lose the weight again. That was really funny. One or two more weeks from now the season is done and then I can enjoy some time with my family and friends and enjoy food as well.

When you have a cheat day like that, does it actually make a difference? When you get back into it on Tuesday, do you feel a bit more sluggish and slow? Can you afford to have one day like that?

No, I just feel like an idiot because then I know how hard I have to work again! I have to train for it to lose the weight again. Then I ruin it in one day what I have to work on for probably a few weeks to get it all off again.

What was that place in your Instagram story? Is that the local place where you just go to eat whatever you want? The one with the woman?

That is a local lumpia, the Vietnamese things. They are pretty fatty. All my friends always go there because they taste so good. I went there and then she was like, “Hey, you, my friend! I did not see you for nine months. You are here again!” I was like, “Yeah, I am here back.” She was like, “Let me take a photo. I have seen you on TV!” Then I went in there and we took a photo, then I ate like ten of those. Then went to all-you-can-eat ribs thing in the evening. Standing in the weighing scale I was like, “Oh no, what have I done?” It was funny.

The woman may have almost gone out of business without her favourite customer there for nine months! I would not have been surprised if you went back and it was all boarded up.

No, still the same woman and still baking the great lumpias. Was a funny thing. On Tuesday morning we went back after it and back focusing on the job. I wanted to win here and that is what we have done. I want to do good at the ‘Nations too, so looking forward to the ‘Nations and try to be as good as possible individually and also as a team.

Overall the weekend was perfect for you. It looked like you had a few sketchy moments though, a few times where you ran off track and stuff like that. A few riders have said the track was dangerous in points. Do you agree with that? What is your take on it all?

The track was like it was. Was it the best track I have ever ridden? No. Was it the worst? No. The track was okay. It was pretty tight in some places, but I have seen worse tracks. Keep it that way.

Going into the ‘Nations next weekend, obviously you have got an international flight. There is not much time to turn things around. Are you going to ride at all this week or do any training? Is the plan to get to America as soon as possible?

I have seen a few comments after the press conference yesterday. I think you said you wanted to beat [Eli] Tomac. A few people were surprised you actually said that. I do not know why, but obviously you are a winner. You have done a lot of that. Why would you go there to accept second? You want to keep this ball rolling.

Finally, twenty rounds done. I think we have done one of these at most of them. People have loved them, so thanks for giving us time every week. People have really gotten on my back if I have missed you, like Assen.

Yeah, I know. Assen was so, so extremely busy. Your fans and you guys understand. I always like doing interviews with you guys. It was a fun year. Thanks for your time and thank you all you readers and guys listening to the interviews. Thank you.