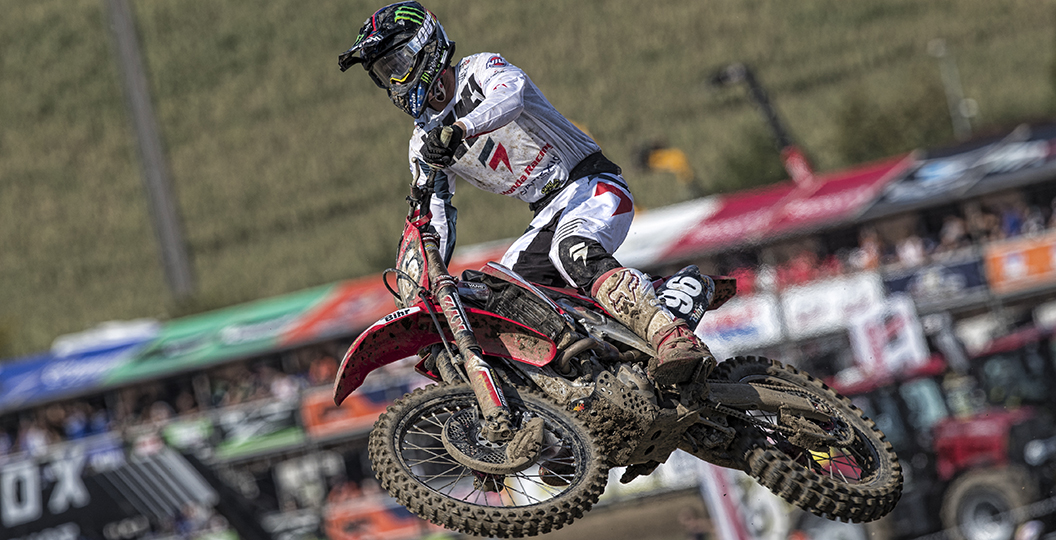 Hunter Lawrence returned to the head of the field at the sixteenth round of the FIM Motocross World Championship, the Grand Prix of Switzerland, and discussed that podium finish in this exclusive MX Vice interview. Lawrence also provides an intriguing look into how his machine compares to the factory bikes, why he is so fired up about the Motocross of Nations and much more.

MX Vice: That is a turnaround! From Lommel to here is night and day difference and you are kind of back to your old self, so all positive.

Yeah, for sure. It is a bit refreshing. To start off, we are a bit closer to the rest of the factory bikes. It is no secret we are underpowered a bit, so on the hard-pack it is not as big a difference. I have been working hard. Even before Lommel we have been working. It’s a good little refreshing thing that we can hopefully keep doing what we have been doing and finish off the year strong and come in swinging for ‘Nations.

Did you kind of expect to be this good here? It is a track that suits you, so that ticks one box. Then obviously, like you said, you knew the bike would be better. I guess if you knew that it was going to happen, this would be a good one.

Yeah, for sure. I am not expecting anything. I was not thinking of it coming in. I just knew I had faith in my training and I knew I had been working hard and putting in the time. Always be happy with two top five [finishes], good progress and stuff. In Loket I went 5-6, so I know on hard pack I was a lot closer to the boys. It was good. We are going to go back and keep working this week and hopefully come out in Bulgaria. We are going to try and do the same, if not better. Just constantly working to better ourselves.

This was obviously the first time that you have battled in the top three, maybe since Argentina. Did that catch up to you a bit with your fitness? Obviously, the intensity is higher at the front of the pack.

Yeah, for sure. Most definitely. I would like to say I am getting back to a good bike fitness and stuff. It is probably one of the first races in a long time that I have had good enough bike fitness to be on the podium and the speed is there. It is good to just be one hundred percent healthy. That is all it is. We are going to keep going down the path we are doing, just keep clocking away the hours and working.

Speaking of your bike, I feel like there has been a bit of confusion. Originally it was said you’d have a GEICO bike and everyone was like, “Sweet. He is going to be just as good as factory.” From what I have heard, you can have the parts or some parts. The team has to rent them or buy them though and, being a new team, obviously the budget is not as great as it could be. That is kind of a stumbling block. Is it something like that?

Yeah, like everything there is always a bit of politics involved in some things, so at ‘Nations I will be on one of their bikes over there. I am looking forward to that. Like I said, just working on myself to come out swinging at ‘Nations and show everyone what I can really do on a good bike.

That has actually confused me. Ever since you came back, you have said in interviews that “We are here, we are building for ‘Nations.” I’ve always been like, well, there are seven GPs left or whatever and you could win one, so why not look forward to one of those? Obviously, you know what is coming and that at that point you are finally going to be on a level-playing field. That is exciting.

I cannot wait for it. For sure, bloody oath, I would love to win one here before I go. I am working for it. Like I wasn’t not trying to win it this weekend, for sure, and next weekend will be the same. I will have a bit more confidence. Sure, I will be going for it. There gets to a certain level or point where you start to push so hard in places where there is nothing I can do to better it anymore, let’s say, just due to the fact that we are not on a factory bike. I think everyone can see it. Like I said, just making me a better rider and just keep working and working and sure enough it will all pay off sooner or later.

This is probably a loaded question. I am not sure if I should ask you, but obviously last year you did not have the same Suzuki as Jeremy [Seewer] through the first half of the year. How does this bike compare to that? You said there it is making you a better rider and you said that exact thing when I interviewed you about the Suzuki.

Yeah, this is a difficult question. I will probably get in trouble if I say it, but the Suzuki was a great bike. It was not a KTM or a Husky, but everything on that bike was a great level. This year, I do not know if I can say we are closer to maybe a stock engine than a works engine. I cannot say too much. Honda’s great and I will look forward to the future.

Bulgaria, long hills, so we should expect it will maybe be a little harder…

That is good. Maybe stay off the brakes coming down, you will carry something up. Maybe we should not expect another podium?

Yeah, for sure, but we will be going in there with our gloves on and ready to fight. Who knows? Anything can happen.

Four GPs left in your European career. Is winning one unrealistic? Is that still the goal? What would you be happy with when you are sat on a plane to RedBud?

Yeah, for sure, I would love to win one. It would be good. It would be a dream come true, but like I said we are almost at a disadvantage before we even get there. Those KTMs and those factory bikes, it is a factory team, so it is difficult to compete with that with a privateer team. I am going to give it my best shot every time I go on the track. If it happens, it happens, but if not I know it is not from a lack of trying, put it that way.