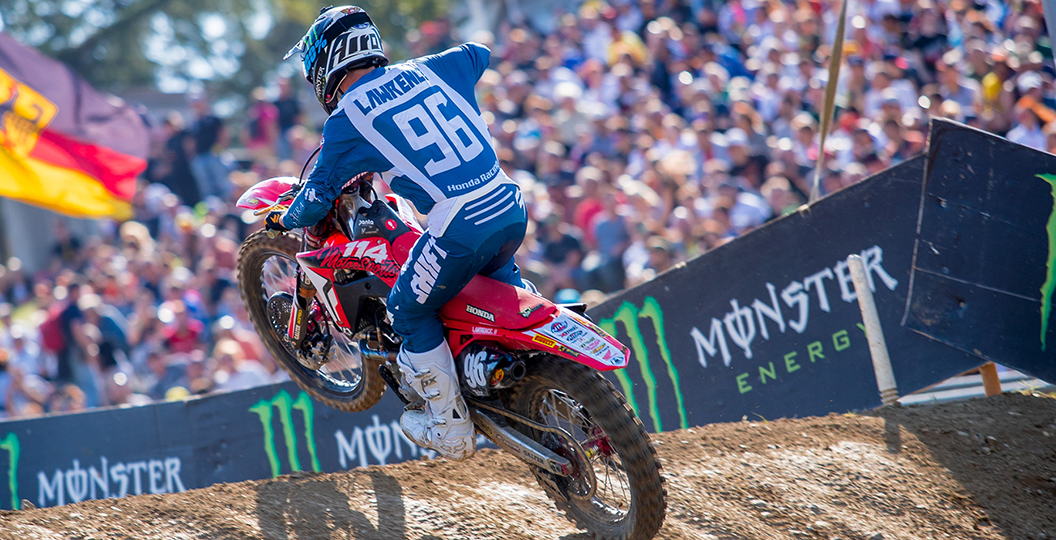 That is a wrap! Hunter Lawrence made a statement in his final race as an MXGP rider, as he showed phenomenal speed and was easily the fastest rider in MX2. The results do not indicate that though, as a mechanical issue in race one robbed him of a win. Lawrence talks about that and many other topics in this exclusive MX Vice interview from the Grand Prix of Italy.

MX Vice: I am not really sure how to feel about today. It was amazing. The speed was out of this world, but obviously you should have won. How do you feel about it all?

Hunter Lawrence: Yeah. I am happy with how everything… Not completely happy, but as far as myself and how I was feeling on the bike. The bike was good. We felt good on it the whole weekend, from the first session on Saturday until the last lap of the last race. I think all the hard work we have put in, it is definitely like showing off more and more. To come back after three injuries, I have seen dudes come back from one injury and they struggle to get back in the race speed. I am happy with it. A bit of a bummer about the technical issue in the first moto for sure, especially [whilst] leading.

I think Jorge [Prado] got the two-lap board. He went past and I was off to the side of the track, so that was a bummer. We came back in the second moto. Pretty bad start and came right through to catch Jorge. Then they threw the chequered flag a lap too early. They did not show two laps to go. They just showed one lap to go. Instead of the two-lap card, they took the one-lap board by mistake, but I am happy. I think everyone knows I was the fastest this weekend. I have no doubt in myself that I was. Bit of a bummer but carrying good momentum onto the ‘Nations. I am looking forward to it.

Obviously that technical issue was tough to take, because you would have won that race. Was it tough to calm yourself down in-between races and regroup ahead of the second one?

Yeah, for sure. It was a bit of a bummer. I was gutted, but I cannot sit and ponder on it. Go back, get some positive thoughts and good recovery going to come out and try and do the same in the second moto. As much as I would have wanted to break the truck in two pieces or break a wall or something, I just came back and regrouped and focussed on the next one. I think I handled it quite well. It happens to everyone. I am not the only guy in the world to have this happen.

All I could think whilst watching you was obviously that you looked amazing and everything. You were pumped about the ‘Nations before this weekend, but after how you performed this weekend you have got to be wanting RedBud to start tomorrow?

For sure. I cannot wait. It is not just RedBud, it is just the whole thing of the move to USA. It is three times easier. Everything is just organised. When we came to Europe we had no visas. Nothing was organised. Everything has been so organised and that is really cool. A lot of people do not understand how difficult a move can be like that. For us to have it as easy as possible, I think it is the best.

That may answer this question, but are you ready to go? You never won an overall here, obviously, which you should have done with how fast you are. Do you wish you had another year or are you just ready to leave MXGP behind?

Yes and no. Let’s say we had a dream year and I ended up world champ and then I’d sort of be going like, “Hey, what is next?” It is a bit of a bummer. We did not do what we wanted to do here, but onto the next thing. Onto new challenges and stuff like that. America is where I have always wanted to go. Coming to Europe was something we had to do to give us a better chance at being successful in America. I think we have done all the stepping stones and hopefully learned enough.

I am going to America with a whole better understanding of the sport and what it takes to be at the top of the sport. Coming from Australia, I went to school and did boxing as a side thing. It was not like on Mondays you go recovery cycling for an hour and all this stretching. It is a full-time job. It is not just a nine to five. So, as far as that is concerned, I think I am starting off on a better foot than I was coming to Europe.

Finally, are you going to go straight to RedBud and get some testing with GEICO in before the ‘Nations? Is the stuff that you did when we were in Indonesia going to carry over and be enough?

Yeah, it will. We will start off, but we will still do some testing. Just some days to get used to the bike. It is just different sponsors on a different team, so different things and bits and pieces like that. We will go over there and get comfortable on that steed and get ready for RedBud.