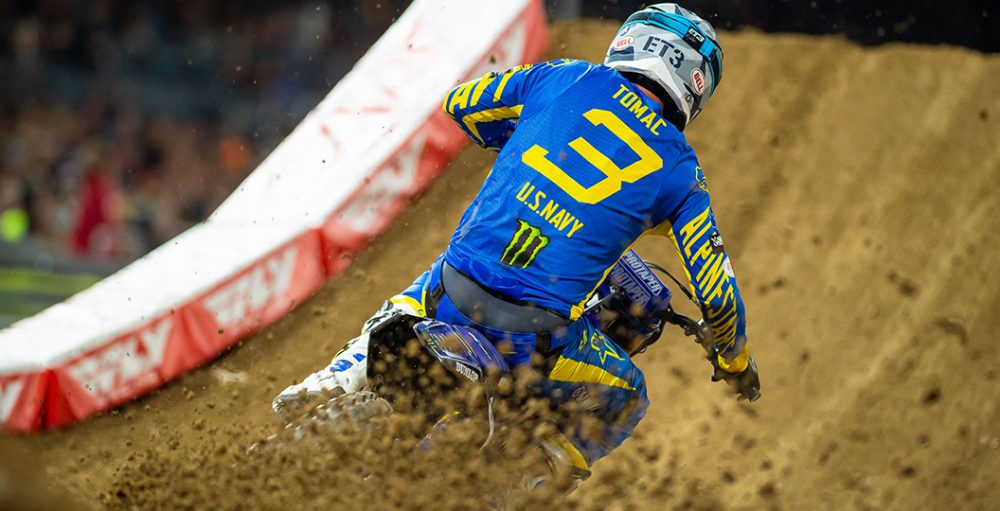 Eli Tomac has one podium finish to his name in 2022 Monster Energy Supercross and has not yet won a main, let alone led a lap. Tomac is in possession of the red plate entering round four in Anaheim, Southern California, this weekend though! It is a strange set of circumstances and something that the main himself admitted that he laughed at in the post-race press conference, which is where the interview below originated from. There are a lot of topics discussed.

Press Conference: A much better result. You got on the podium and the start was good. The riding was good, but you could not quite get Chase [Sexton] and [Jason] Anderson did go by. How do you rate your night? Is there work to do or are you satisfied with where you are since this is only round three?

Eli Tomac: I rate the night as an improvement – that is what we have been doing each weekend. We started a bit slow at Anaheim 1, then we got a little bit better at Oakland and better again here. It was not on top, yeah, but it was just a bit better. I have been working like crazy on those starts. I really watched that 250SX main and how it swept. I was like, “Alright. I am going to go for a little bit of a gamble here and try to sweep.” It worked. I have been improving some riding too. I was not the fastest guy tonight, but just solid. I am happy with where we are going.

Were you aware, when going back and forth with Anderson, that he was having mechanical issues?

Oh yeah! I saw the smoke. I did not know what was going on, whatever it was. I just figured it was the radiator for him to keep going. I saw it smoking there for a lap or so, then he really started slowing down. Yeah, I saw it.

For you to be holding the red plate, without winning a round, must feel kind of unusual. It is definitely a good position to be in though.

Yeah, you just take it for what it is. We were kind of chuckling when we saw that up there on the board down at the podium. That is just the way that this season is and how much talent there is in the 450SX class right now. You see different podiums every weekend and it is just what it shows you, it is crazy.

The precedent has been set the last few weeks. You just look like a much happier guy, on the motorcycle and off of it. Does that come from being with the team or a new outlook? What is so different that makes everything so much more enjoyable?

It is just the environment and being at the track with a lot of young guys. It is just a new environment and seeing new things each day, like new tracks and new places, and feeling good whilst doing it too. It is not just because it is new, it seems like it has been working and we have been improving. All of those come to mind and make me a happier guy.

When you were with Monster Energy Kawasaki, was it normal for you to practice with the Pro Circuit team? Is that something new [riding with the 250SX riders] since going to the Star Racing team?

No, I was pretty isolated. I very rarely rode with PC.

You have been pretty open about your relationship with your brother, who is in military, and get custom gear and graphics done for this race. Does that have anything to do with the race tonight?

It is just cool that we get to show a race of support for the military. Yeah, my brother is in the air force and flies a C-17. It is very cool to be here and I always give him my helmet from this race each year, so it was cool to get on the podium.

Dylan [Ferrandis] talked about the changes that he made to the bike during the first two races. For you, it is a totally new bike. What kind of bike changes have you done during the season, if any?

I have not done anything major. It has been little things, nothing drastic and mostly for starts like everyone is talking about. That has been where most of my work has been. It has been little stuff, just to fix a bit of balance and stuff that you never know about until you go racing on the bike. Nothing too out of this world where we are ripping off the clamps or changing linkages. None of that during the week.