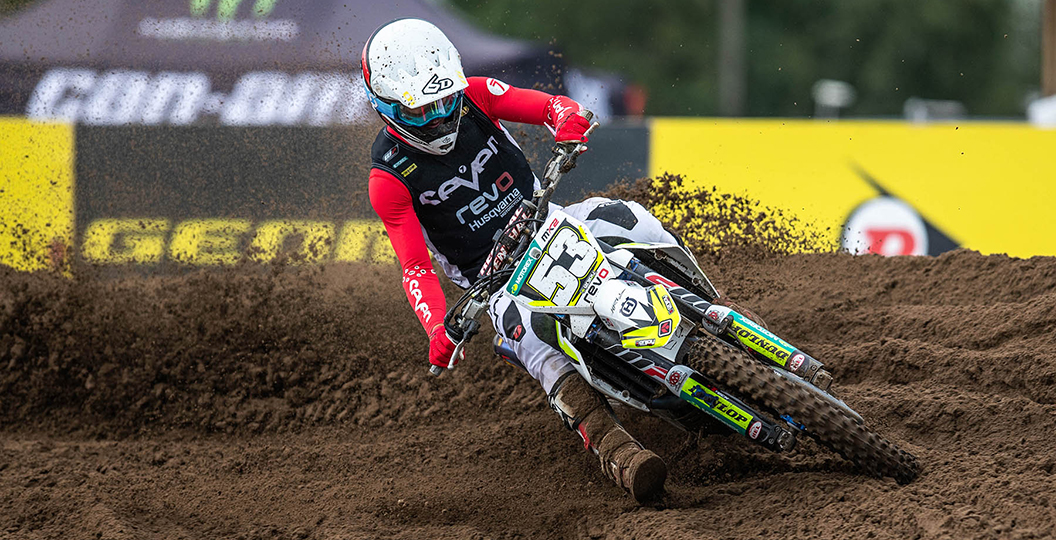 Dylan Walsh’s first year in the MX2 division is quickly drawing to a close and there have actually been a lot of high points. There is no doubt that he has shown just how much he can achieve, especially now that he has some experience beneath his belt, yet he is still looking for a ride for next year. Walsh covers that and his first year at the highest level in this exclusive MX Vice interview from the Grand Prix of Belgium, which he was forced to withdraw from prematurely.

MX Vice: You are not racing [here at Lommel]. Kind of a weird deal yesterday, which led to you not racing, so just kind of talk us through everything that happened and how the hell you ended up with a bruised shoulder.

Dylan Walsh: Yeah. I was pretty excited for my new home GP, but it didn’t turn out so good. On the third lap of timed practice I ended up hitting one of the metal poles on the side of the jump. It blew me off the bike. I just got a deep tissue contusion in my shoulder. I decided to sit out, because I’m not one hundred percent. In MXGP, and at Lommel, you have got to be one hundred percent here. I will try to rest up and get as good as I can for next weekend at the seventh round of the British Championship.

You would have been using a rut right on the left side of the track to hit the pole. Were you using that line all the time and it was fine, then this one random time you hit it? Did you just decide to try a new line and found out that it led to a pole?

No. I was taking more the middle. Someone was down on the inside, so I went wider to stay as far away as possible. I went a bit too far, to be honest, so yeah… It was not ideal.

It sounds gnarly as f**k. It almost sounds like a game thing. You literally just got blew off the back. The bike went flying. Did you immediately know you were kind of f**ked up or did you just feel battered?

Yeah, definitely. I mentally prepared myself pretty good and I have been riding the sand for weeks now. Even before the hard-pack GPs I was still doing the sand, just trying everything I could to get ready for it and prove to people I can ride the sand. Things don’t go how you want sometimes, but it is what it is.

It sucks as well, coming off of last week and the sickest race of the season by far for you. The qualifying race basically shut everyone up and proved what you can do. There was absolutely nothing bad about it at all. Just positives, positives and more positives.

Yeah. Last weekend was wicked. I started sixth in the quali race and moved up to almost third. I made a little mistake and hit neutral. I was battling for third and I ended up fifth, so if you look at that result next year that would be a qualifying win as they all move out. It was good to prove that I can be up there. It has just been a difficult year for me. I’ve not really had anyone guiding me or showing me the way. I’ve just been doing it on my own, kind of thing. It’s just been a big learning curve.

Another good thing about the Loket thing is you rode amazing. You are used to hard-pack and all that, so that is good. Loket is a really weird and unique track though. That was your first time there. You had never even set foot in the place, let alone rode it, and you immediately… Like you said, next year that would be a qualifying-race win. That kind of shows that you have got the thing that you need to adapt to things quickly, which ultimately leads to race wins and championships.

The starts cost you on the Sunday, but that’s kind of not new. I feel like the starts have been… Well, apart from the qualifying race, I genuinely cannot remember one top-ten start you have even had this year. I guess that’s just been a constant grind.

Yeah. I’m a good starter, but I haven’t quite figured out the time practice. I’m not always having good time practices. I get into the moto, get a decent start or a half-decent start and then I’ll ride good. Matterley… I started both motos P2 and then I ended up getting eighth overall at my second GP. In Valkenswaard I think I gated fourth from gate twenty-six but had a little accident and got landed on.

If I can get a good gate pick, I get good starts. Last weekend was tough, because I ended up having a bike problem in moto one. In moto two I didn’t get a good start, but I came through pretty strong. I ended up going down and having to come back. It’s a learning curve.

Looking at the year as a whole, has it been tough to swallow at times? Like you said, you have been landed on twice this year. Most guys don’t get landed on once. Have there been proper low points where you have just been ready to sit in a dark room and not think about anything?

Yeah. It’s tough, because I’ve sacrificed so much in life to get to this point. I’ve had good stages like Hawkstone, winning a moto at the international, and then getting a top five at Mantova in the second moto. Top five in the quali race at Loket. Eighth overall at Matterley in my second GP.

Then, yeah, I’ve been landed on a few times and just been in the wrong place at the wrong time. It’s tough, but everyone told me it’s going to be tough. Best thing about it is I have the British championship to always go back to. I go back there, then I can get a moto win or two moto wins. It refreshes me. It’s not too bad.

Have you leaned on Josh Coppins or anyone like that at all? Not for training, but just for little tips with how tracks are going to form and stuff like that? He has been and done it all.

Yeah. I’m actually really close with Coppins and [Ben] Townley. I’m in contact with both of them weekly. Ben and Josh both gave me advice here and there, but they are still not here. Josh told me a lot that you need recovery, as it is really important. Just as important as training. I didn’t really understand. He said, “Some weeks you won’t ride, because you won’t need to.” Now I know how that really is.

If you are quite close to Josh, when he came down that downhill at Loket for the first time did you just get a bit sad? Every time I go to that place that is the very first thing I think of.

Yeah. I was going to Loket and I remember being a kid and watching it on my TV. It’s not a good place for New Zealanders, that’s for sure. Hopefully in the future I can turn it around and make it good for New Zealanders.

We have only got a couple of rounds left now and you have got this shoulder problem, but what would make you happy by the end of the season? We have got Imola, Sweden and Turkey. All of those tracks are going to be good for you, as they are hard-pack and jumpy.

Yeah. There are only a few rounds left, so I think for the next GP I’ll be fine. I just want to get an overall good weekend. I know I can be a top ten or top-five guy, so I just want to put the weekend together and show people that I can be someone next year.

Speaking of next year, you kind of need to find something? You have got nothing confirmed right now and are just shopping around.

Yeah. As of right now I’ve been told to look for another ride for next year, so I’ll be looking. All the cards are open for next year. Hopefully I can get a good team, good structure and the right people around me so we can be strong.

Are things looking good in that respect? Are you stressed about it or do you feel like it is all going to sort itself out? There are some good cards on the table at the moment, right?

You are going to be on a new team no matter what next year. That is four European teams in four years. Does that kind of bum you out a bit? Every time I talk to Max Anstie he says how, by the end of each weekend, he has learned so much about how his bike performs on a track that he wishes he could just go back to the start.

Yeah, I was actually speaking about that the other day. That’s the hardest part. First year, complete write off that team [Carglass Honda]. Second year was pretty good learning. Third year learning again. Now, for the fourth year, I don’t even know if I’m going to be on the same brand of bike, so it’s going to be learning again. We’ll see what type of people. Hopefully it’s good.

You have done a full year of GPs now or close enough anyway. Is there one big change that you know you need to make for next year? Maybe spend more time in The Netherlands in the winter or come over earlier? Anything like that?

I think I’m just going into the pre-season to work a lot on sprint speed, because at the practice I can do sprint speed. I can match anybody’s times, but I need to transfer it to the race. I think I’ll work on that a lot. I definitely won’t go home this year again. It will be my fourth consecutive year here. I’ll just work on that.