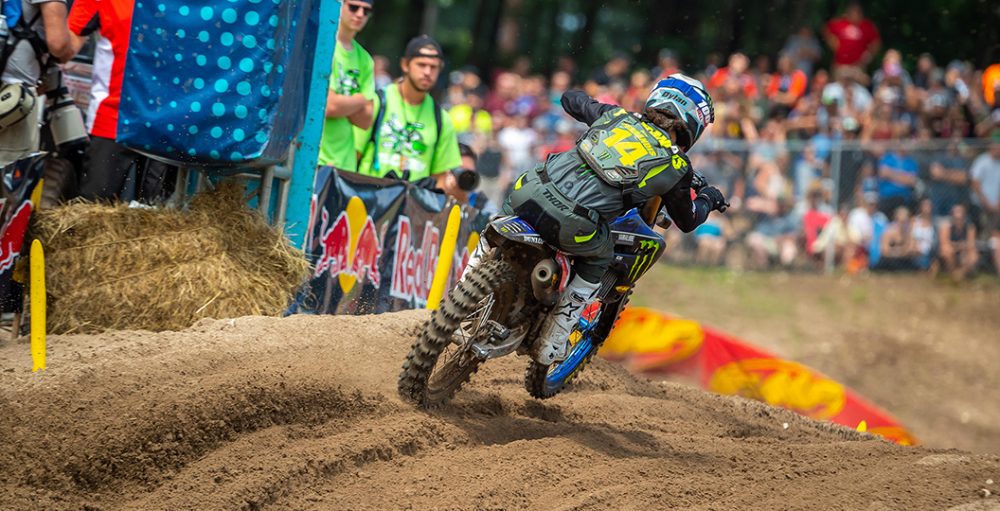 It was certainly a surprise when Dylan Ferrandis stood atop the podium at the opening round of 2021 Lucas Oil Pro Motocross, but that sight has become normality now. Ferrandis has won four of the first five rounds and now sits atop the premier-class standings with a 19-point advantage. Everything is certainly trending in his direction – a smoking YZ450F could not even halt his progress in the second moto at the most recent round, Southwick.

Southwick actually played host to his most dominant showing of the season; he led every single lap, had the fastest lap time by more than half a second and eventually hit the chequered flag with a comfortable gap. Such an impressive ride was discussed in the post-race press conference, among other things. Ferrandis’ questions from the media event have been transcribed below.

MX Vice: Are you surprised at where you stand right now? Would a 450MX championship be more of a thrill than a 250SX title?

Dylan Ferrandis: Yeah, for sure. I’m surprised! I never expected to be this good this season, but now I am trying to match the results every week and trying to win. It is working great right now. I am surprised but it is good. It is hard to compare 250SX and 450MX. The competition is much more in 450MX – there’s not much room for mistakes. Everything’s going well right now. I’m not really thinking about the championship, winning races or anything. I am just taking it race by race and doing the best that I can, then I see at the end of the day. It is working great right now, and I will keep doing that.

The team told you about the steam coming out of your bike in that second moto. When you came in and had that frustration on your face, was that because you felt like you could go with Eli [Tomac] or just because you could not push all the way through?

I don’t think that I could match Eli’s speed in moto two – he was on fire and riding well. I feel like I could have come back on Ken [Roczen] and tried to challenge him in the last laps though. I was for sure frustrated about that and a bit frustrated because I had a small crash. Without that small crash, maybe I could have passed Ken? The team asked me like four laps before the end to slow down and secure P3. I was not really listening. I wanted to go back to the front and try to pass Ken, but they were pushing for me to slow down.

I did not have much choice but to listen and do it. It was for sure safer for the bike, but we do not know. We don’t know what we can do with the 450F and how far we can go with it in that condition. I was frustrated to not leave everything out on the track. I gave it everything I had at the past few races, whereas this race I had it easy in the first moto and then in the second moto I just could not push to the end. The good thing is that I got the overall. That is the most important!

For sure. I am working hard, but I am not the only one. The team is working every day, on weekends and days off. They never count the hours that they do. I’m here because of them. They do the testing and everything – they do the bike. I’m not the only one! We were struggling so much to have this YZ450F ready to win on in supercross. It was hard, and we had a lot of disappointing races. This team has worked so hard the last few years but did not have the results that they expected – giving them the results today is awesome. I am proud to be a part of this group of people that work as hard as me. Everybody’s happy and gets a reward at the end.

You obviously want to win a supercross race, but do you feel good that you were able to find a good spot for this championship and then maybe fight for supercross next year?

The goal is to win every championship when I go on the line. Like I said, we were not ready to win races in supercross this year. We learnt a lot – me as a rookie and the team as rookies [in the 450F class]. We are all surprised, but we also worked so hard for this championship. We deserve the position that we are in now. We saw that at RedBud that there were three Yamaha bikes in the top five, so it is not just me. The whole team has worked together to put the Yamaha on top. The goal will be to be ready for supercross, as soon as the motocross season is over. I must win in supercross. We all want that and that is just as important as motocross.

Did you guys come to a conclusion about what was happening with the bike in the second moto?

No, not really. I still don’t know. I asked the team to tell me, as it is going to be important to know for the future. Eli was really on fire and I tried to stay in front of him in the first part of the moto – I was just pushing the bike so much, not being too smooth and using the clutch. The bike just got too much heat and after that then I don’t know. We still don’t know right now, but for sure we are going to know in the next few days. It is important for us to know for the future – if it is going to happen again then we need to know how long we can go with a bike that smokes.