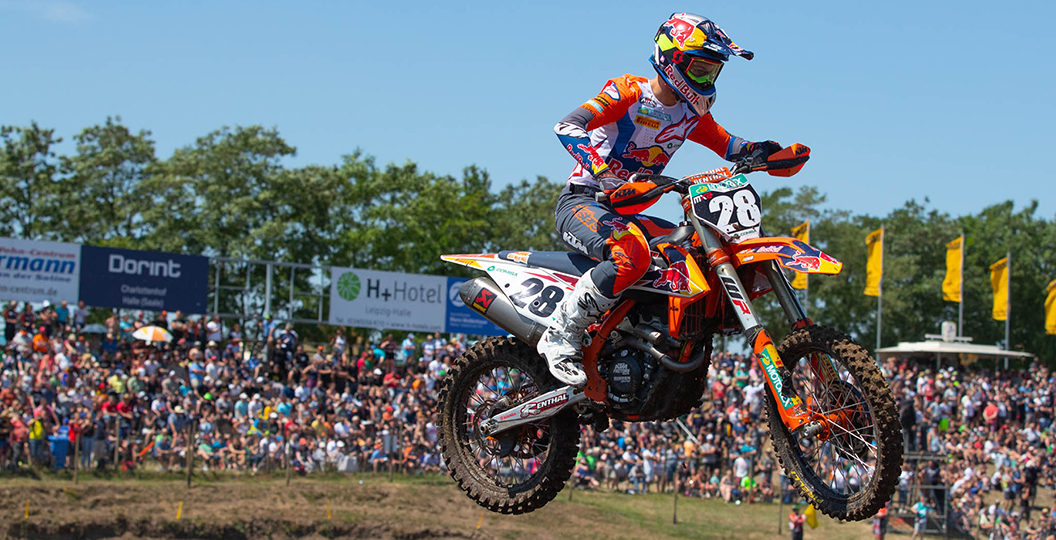 Dirk Gruebel has a lot of knowledge to impart in each interview, as he leads the most successful operation in the FIM Motocross World Championship and has an intriguing opinion on a lot of hot topics. Gruebel hit on a lot of those in this exclusive MX Vice chat from the Grand Prix of Germany, as he broke down the ankle injury that Jeffrey Herlings is dealing with and how Tom Vialle has progressed. Track prep is also looked at towards the end of this lengthy piece.

MX Vice: One man down again this weekend, but at least your one man stepped up! Second overall, I think, and the best result of his career. Take away the results and it was still the best riding of his career. There is plenty to smile about, which is different to last week.

Dirk Gruebel: Definitely. Tom [Vialle] really surprised us today. It did not look that well yesterday. He faded away towards the end and gave away three positions on the last lap. It was a pity, also because the rider hates his ride, let’s say, then. All the effort for nothing, but today he showed really big heart. In the first race he just kept up with the speed from Jorge [Prado].

Jorge probably he pulled him a bit, showed him some nice lines and that was also good to see. He just stayed in second place easily until the end. That was good to see. In the second race we expected that the heat might kick in a bit and he would suffer more, but he still maintained third. Second overall, like you said, it is maximum points for him from what is possible. Really good job.

I feel a bit bad for Tom in a way, because obviously he came into this season with no expectations. When he finished seventh in Argentina everyone was like, “That is amazing!” He then got a couple of podiums and now fans, industry and everyone else expects that from him. Maybe we should not expect so much so soon? Sometimes I think he finishes fifth and that is fine, but people do not give him the credit he deserves. Do you have to kind of remind him that this is all good?

Exactly. Our plan was to get him inside top ten for the first third of the season and then work into the top seven or top eight, then the plan was maybe top five towards the end. He surprised us and people take it for granted if somebody already has two podiums in his second, third or fourth race. If he has a fifth place, which is still fantastic for this stage of the career, they are like, “He is fading already. He is in the hole” or I do not know what else. They do not understand the pressure that builds up with these young people. He handles it well. Today he showed everybody that he has it.

One thing that I have been wondering through watching pit boards and your signals, is one of his issues maybe staying in it for the whole race and not worrying about what people are doing behind or in front of him? Are you trying to just get him to focus on himself?

Yeah. Today was a bit of danger, like in the second race when [Maxime] Renaux came along or even [Thomas] Olsen. I said straight to his mechanic that when we see that they come much faster, he just needs to let them go. He is still finishing on the podium when he maintains the fifth, because he was second in the first one, but if he tries to fight them, then the last ten minutes he is going to die. He is just not on that stage of fitness yet from the body that he can really push through for two complete races. We are working on that and it is getting better, as you see. We are in a good way, I would say.

Speaking of fitness, it is a long season. His first year in a factory team. That comes with signings, testing and a lot of obligations. He is obviously doing more races as well on top of that. Are you working with him to make sure he is still just as strong at the end of the season? Do you even expect that at some point this is going to take its toll on him a bit?

No. We monitor really that we do not over-train him. It comes automatically a little bit when you have a calendar like this. Three weeks in a row does not help. It would be better if they have some recovery time, but he is doing well. Then those little Dutch races, which are one-day events, are super good training, let’s say, with marshals and real-race action. That helps him also a lot. He learns how to deal with people around him, whereas before he was not so used to that. Now he does not stress as much anymore. He is learning. It is going well.

This is kind of a dangerous question maybe. It sucks that [Jeffrey] Herlings is out, but if there is one good thing… Do you think it helps Tom having the entire team focused on him?

I don’t know. You could see him when Jeffrey was back, he was even a bit more relaxed because all eyes are on him. Now Jeffrey is out again, so all eyes are on Tom Vialle again. That’s a bit the situation he needs to grow in still. It is not easy to stand under this tent. Everybody has high expectations and normally you need to win, because it was like that in the past, but he needs time.

It is just the leader is not there, let’s say. He just takes some holidays. He takes it pretty good, but of course you can see a bit when Jeffrey [Herlings] is not there he is a bit tighter because everybody looks in and there is Tom Vialle. This is the rider. Herlings is hurt. He is not here.

We need to talk about it. I am still sad. It hurts me to say the words. Jeffrey is out, again, and it sucks. I guess he had surgery earlier this week. There was a chance he would not have to have surgery though, right? What did Dr. Claes have to say?

There was a clear fracture. There was a little piece off and they fixed it with two bolts, so now he is just recovering. The foot is in a cast again, I think for two weeks, and then he starts working on his rehab, so that will take a couple weeks until we see him back on the bike.

We are looking at Lommel or Imola? That sort of time, right?

How is his mentality? He took it pretty hard the first time around. I am guessing he is just extremely pissed off, sat in a dark room somewhere and not talking to anyone?

No, he just can’t get it. How much bad luck can one guy have? He got a spanking this year already with the first injury and then you come back, let’s say halfway through, and boom, the next one. It’s a big bummer for him. This year is in the books for him. He doesn’t want to talk about it anymore. He is already focusing on next season to be one hundred percent fit.

If there is one good thing that came out of this, that ride at Kegums with a fractured ankle or whatever may go down as the best of his career. I think we can talk about it like that!

I don’t know. To ride with a fracture not even knowing what you have, that shows anyhow how bad he wants it. He wanted to show everybody how fast he can come back, and he showed it before, plus how good he actually is. He proved it again. He is an animal. When he’s on the bike, it is unbelievable.

If we are expecting him back around Lommel, that is three rounds that he will definitely miss. Tony is kind of up in the air with whether he will miss everything or be back at the next round. Is there any chance of a fill-in rider? You did it with [Shaun] Simpson in 2015.

At the moment I don’t see that, to be honest. No. Now with the flyaway races, we cancel some material of course already, and then afterwards it does not really make sense to give a bike for one race or two to somebody. You also need to do all the testing and get the guys comfortable on the bike.

Finally, on a completely different subject, everyone is talking about track prep this year. There have been a lot of injuries and riders are blaming track prep. You have obviously seen a lot of different circuits and track prep over the years, so what do you think is going on in that respect?

It hits us hard. In the last three weeks we lost now, let’s say, eight riders, I think. It is not good. It is not good for the sport. Now we fly overseas, and a couple of factory teams have no riders. That is not what we are looking for. It is hard to say. Of course, before MX2 there was always quite a lot of water. It makes it dangerous, but of course the track needs to last for MXGP as well. If they water it also in front of them, then it is even more dangerous.

We need to find a way to get the speed of it out and to get it safer. The riders, in my opinion, need to work a bit closer with Rui [Goncalves] or Youthstream who does the track preparation. Get their ideas in on what they should do to get the speed down, get it rougher maybe or more technical just to get that high speed out.

Rui is still around and doing the whole track prep thing. The first year he did it 2016, I remember seeing all of the riders stood around him. Is he still working with the guys as closely? Do you see him under your awning at all? I feel like they are maybe not doing it as a big group anymore, but maybe he is still doing it one-to-one. I don’t know.

I think it is less. Like you said, in the past he got them together. When he was new, he wanted to have input and things. He also learned, of course, but in situations like this now, I think they should all come together. Everybody should give their feedback on what they do not like, what should be changed and what helps the whole situation but still keeps the race fluid. Not like a stop-and-go race, but the overall speed should drop a bit. When these guys hit the ground, it hurts.

They just need to do something like have a meeting at an exact spot on Saturday evening at each round. If you want to come and have a say, you can. Stay away, if not, but they will be at this place at this time and that is the place to chime in.

Yup. That will be a good idea, in my opinion for sure. We need to involve the riders as well.