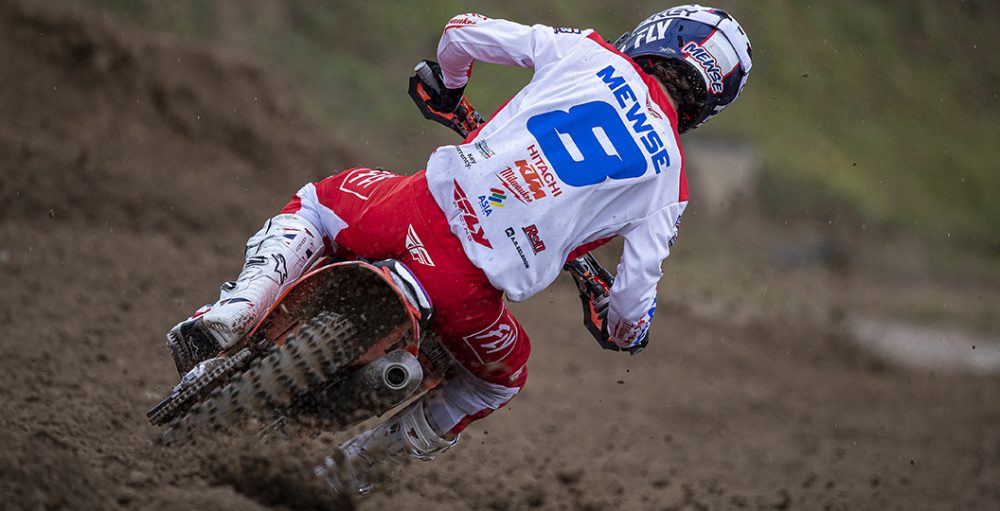 Conrad Mewse represented Team Great Britain at the Motocross of Nations for the first time over the weekend and did his part for his nation, as a fourteenth in the second moto was rather poignant. The MX2 qualifying heat was where he truly shined, as he set the fastest lap of the race on five consecutive laps and gained ten seconds on the reigning world champion. It was a look at just how good Mewse can be.

The Motocross of Nations was seemingly a positive experience for Mewse, based on the above, but he struggled to relax after the race and felt as though he could have done more. That is discussed at length in this interview from the race, which was originally posted as an MX Vice post-race podcast presented by FLY Racing’s Formula helmet. This is an insight into just how much pressure he puts on himself.

MX Vice: A big day on the podium. It was the first time that you have stood up on the Grand Prix podium, in a way, seeing as you have never done it in MX2. Weird thing. You did your job – that fourteenth in the second moto was big. I guess this must be the best day of your career.

Conrad Mewse: Yeah, definitely. It was an unreal feeling to be up there. I was a bit disappointed in myself and my performance today. It was just a lottery out there. I felt like I showed what I can do in say a proper race yesterday, on the Saturday, and then today was a bit of a lottery. It was difficult and it was tough. We got it done. I had two fantastic teammates – they rode fantastic today. Ben [Watson] getting the MXGP overall and Shaun  [Simpson] pulling it out of the bag with his thumb. I looked at it after the race and it was honestly twice the size of the other one. I could not believe it!

Hats off to those guys, as they really brought us up onto the podium and thank you to them. Thanks to Mark [Chamberlain] for the great opportunity. It was a good day. My team did a fantastic job. My mechanic, Brandon Annear, did the quick wash and dealt with the time very well. I rode the same bike. I am super pumped for all of them! My team has done a fantastic job. It has been amazing. This is a step forward, especially on Saturday. It is a step forward in MXGP as well. I know that I can run with those guys. Give me a half decent race, not a lottery, and we will be there.

Saturday was your story from the weekend. You were amazing and had the fastest lap of the race on five laps in a row. All of that is amazing, but it is not surprising. I know you can do it – everyone knows you can do it! I am guessing that you felt like you belonged there.

I had a really good feeling going into this. I feel like the pressure… Not so much the pressure, because Mark did not give us any pressure. I put pressure on myself. I wanted to do Team GB proud, you know. I feel like that brought the best out of me. I rode aggressive on the first few laps and made passes. I think most people know that I have got the speed. It was not surprising, but it almost was. I have not shown it in a world championship race. I am definitely going to take that forward. I was really happy with my ride, especially on Saturday. I question myself today like, “I did not really help Team GB that much.” A few people have said that I cannot forget yesterday, because my result was a part of the qualifying and got us a good gate pick. It was a team effort. I did not perform very well today, but I was consistent and did what I had to do. We were comfortably on the podium. It was an amazing day for the team and my team, Hitachi KTM fuelled by Milwaukee.

It’s a weird thing being an MX2 rider at the MXoN. Your result will never look amazing on paper. A third or a fourth is ridiculously hard to get. Going 22-14 probably makes you think that you did not do much, but that is what makes things happen in the grand scheme of things. That is why you should be proud of what you did today.

Yeah, definitely. I was riding around in the middle of the pack, battling with everyone, and thinking, “Am I actually making a difference to this team?” When you get back and see where you were in your own class, then all of the points add up. Some teams have had mares today and others have pulled through. I just feel like we had a really consistent day. We were comfortable on the podium and eight points clear of fourth. We were just two points off the win and that is the closest that we have been in a long time. Hopefully I can ride for Team GB again soon and we will go for gold.

I was surprised that you did not get the inside gate in the first moto. How did that play out? Normally, the MX2 rider would just take it.

It is a team effort at the end of the day. Ben was riding fantastically and he has been getting amazing starts. The decision that we made has helped. Mark decided with us together as a team to stick Ben down the inside to get a really good result on the board in the first moto and put us in a good position. It is all about being a team effort. I sacrificed the inside gate and started from the outside – I did what I could. I believe that is the moto that we dropped. This is a team race. It does not matter where Ben finished, I finished or Shaun finished. The only thing that matters is where we finished as a team.

You were watching that last race like everyone else. How stressful was that? The Netherlands and Great Britain were so close. There was all of this talk about Italy being disqualified, so what was that like?

When I originally saw the penalty from [Alessandro] Lupino, I was wondering how big that was going to be and whether it would be a disqualification or a penalty. We were only one point behind The Netherlands. I was like, “If we miss this win by a point then I am going to be fuming.” I felt like it was almost on me. I was a bit gutted because I felt like it relied on me a little bit. I could have made some passes. We finished third on the podium for the fourth year in a row, at the end of the day, so we could not be happier. We look to improve for next year.