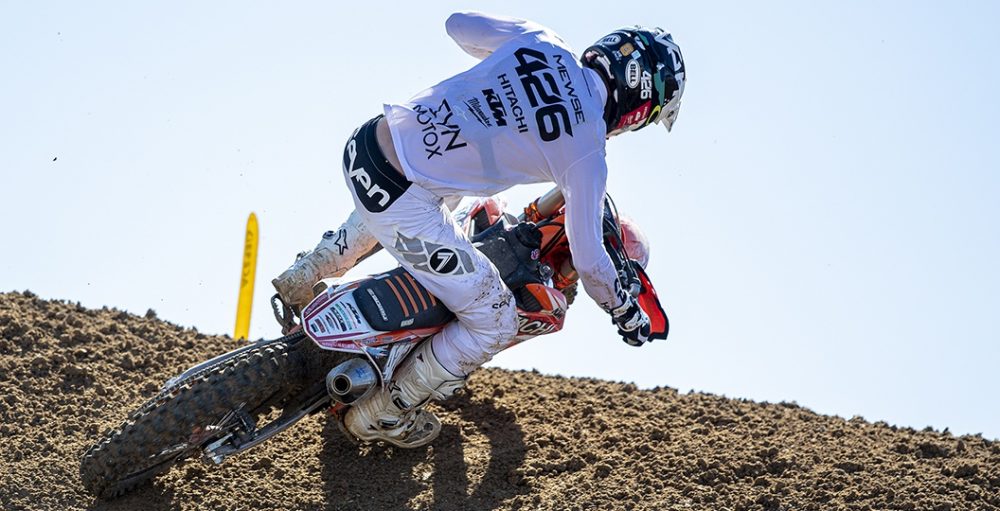 Conrad Mewse has finished in the top six in at least one moto at the last eight rounds of the 2020 FIM Motocross World Championship, which is quite the achievement for the man who was once wildly inconsistent. Mewse has transformed into a consistent podium contender, with the help of the Hitachi KTM fuelled by Milwaukee, and could even be a race winner by the time that the championship reaches its conclusion! Mewse talks about his progress and another milestone, his first pole position, in this exclusive MX Vice interview.

MX Vice: The day had a lot of promise and the end result is not what you wanted, but there are still so many positives to take. This is just another race in the seven-race streak of positives. First pole position ever and not just that, you decimated everyone. Moto one was great. Second moto was a bit of a mess after lap one, but still a good day.

Conrad Mewse: Overall, it was a really good weekend. Straightaway in qualifying I felt really good on the track. I did my fast lap at the start and think I was four tenths faster, but I knew I could still be perfect in a few sectors and things like that. I was waiting and waiting, then someone went faster. I gave it another go. I got pole by quite a margin, so I felt really good on track. I had a great start in the first moto. I was in third. [Mathys] Boisrame had a tip-over in the third turn, and I got stuck in his bike unfortunately.

I came from about tenth back to fourth, so I was happy with that. If you would have told me that a few weeks ago I would have been over the moon. It was frustrating, with the position I was in, but I was happy with it. I did not get such a great start in the second moto. I think I was in about fourteenth or fifteenth, but I was confident with the way I was riding and the lines I had. I was confident that I was going to move forward, until a rider crashed in front of me on the first lap. I had nowhere to go, hit his bike and went over the bars. Got back to the bike as quick as I could.

I picked it up, but the bars and the wheels were just bent up. I had to roll around for the rest of the lap. I could not do any jumps. I came into pit lane and straightened it out, but by that time I was twenty or thirty seconds behind last place. It was always going to be difficult from there, but I put on a charge. I was riding good and I managed to get back to twelfth, I think it was. Overall, the riding was really good all weekend. The overall result could have been completely different if I just got a bit of luck on the first few laps and there wasn’t people crashing in front of me.

Like you said, you knew you could go faster in qualifying and did it. You had another little stab at it on the last lap too. I think you went fastest in sector two and had your personal best in sector one. You missed out by like two tenths, but you actually had the two fastest laps of the session. It was clear you had it in you. I’m guessing that, going to the line for moto one, confidence was maybe the highest it’s ever been.

Yeah, definitely. That last lap would have actually been faster again. I overshot the double in the last sector and ran out of the track. That for sure would have been quicker again. Like I said, I just felt great. I felt really good. I had confidence. We have done a lot of hard-pack riding over the last few months of lockdown, and it paid off this weekend. Everything was kind of in place for a solid weekend. There were just a few mistakes. I’m going to continue to work hard. It’s showing. We are a consistent top-runner now. In Latvia I could not even get inside the top twenty, but now I’ve just come from last to twelfth. We are definitely making improvements. For me, this is putting everything in place and getting everything dialled in to have a solid season next year.

Considering how far back you were in the second moto and the fact that everything was bent up, coming through to twelfth on a track that was not exactly the easiest to pass on… Maybe it was a tiny bit better than Mantova, but it’s not like it’s going to be at Lommel. I feel like that progress was pretty good as well.

Yeah, for sure. I think the team said that for the first four or five laps when I was on my own trying to catch last place, I was the fastest man on track. I was feeling good. Like I said, it was just that crash that kind of messed me up. I couldn’t believe it when I was on the floor. I was like, “No, not again.” We got back up and straightened everything out. I gave it my best shot, and that was all I could do today.

The track was awesome. I want to stay here again next week.

You want to stay everywhere now, don’t you [laughs]?

I just want to race here all the time now! The track was awesome though. People were going on about a man-made track and things like that when we got here, but honestly it was awesome. There were so many technical aspects to the track. There were off-cambers, rollers and doubles. It had everything. It was really technical and it caught a lot of people out, including me. Overall, it was a great event. The way everything was set out here is awesome. I hope we come back again next year.

I could not see the big triple down the bottom from where I was stood, but did you do it at all? Did you think about it? I think [Tom] Vialle and [Jago] Geerts started pulling it in the second moto, but I don’t think anyone did it before then.

No. I balled that one up. I won’t go over the triple. In qualifying I obviously went P1, but I signalled to my father and Stephen Sword on the side of the track to say, “Do I need to jump the triple? Do I need to jump it?” If I had to jump it, I would have. They were going, “No, no, no! Don’t jump it! Don’t jump it!” I was like, “Okay, no worries.” To be honest, I don’t think there was that much time to be saved doing it. It looked cool and it would have got me a good Instagram video. Keeping it low and then jumping out of the last one was the safest way this weekend, I think.

Like you said, you have done a lot of hard-pack riding lately. Lommel is still your bag though. I guess going into three races there, there is no reason why this positive streak cannot keep on rolling.

No, definitely. Lommel is one of my favourite places. I’m looking forward to getting back in the sand. We are going to have a good week in Belgium this week. We are going to get back to it. Like I said, I love the hard-pack and I’ve done a lot of hard-pack riding. Sand is still my favourite though. We are looking forward to getting Lommel and hopefully clawing some points back.