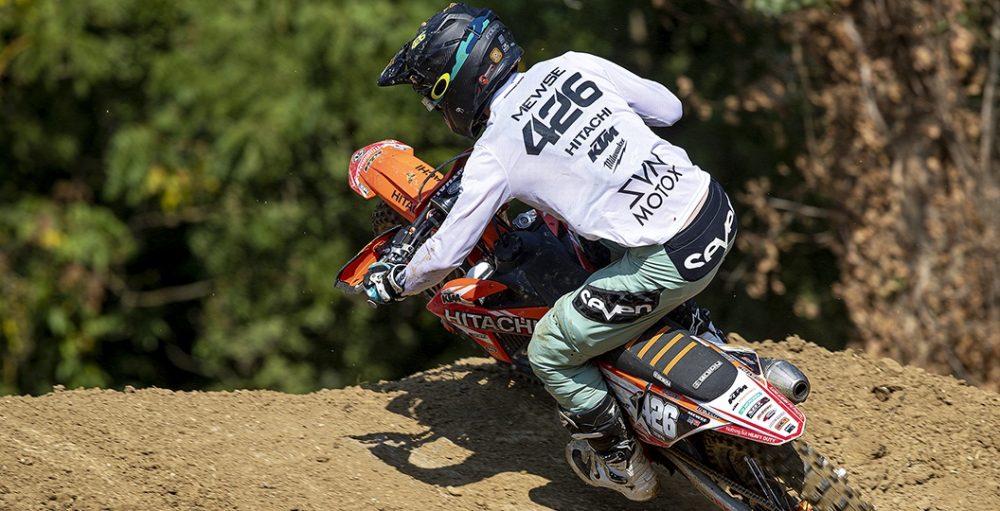 Conrad Mewse has made a significant amount of progress in a month, which was evident at the second triple header in the 2020 FIM Motocross World Championship. How does the Hitachi KTM fuelled by Milwaukee star feel about the way that things are currently trending? Is there more to come as the Grand Prix contingent now set their sights on more Italian fixtures? Mewse is quite candid in this exclusive MX Vice interview from Faenza 3.

Conrad Mewse: Overall, I’m happy. I’m not going to complicate it too much. It is what it is. First race I put so much into that. I didn’t get a very good start at all. I was twentieth place on lap one. Honestly, I was just feeling it. I had some good lines. I was fighting all the way through. I passed some really good guys. It was nice to get to the front from where I started. Like you said, the first race for me was very good and I put a lot into it.

I went out in the second moto and I just did not have it in me from the start. I struggled with the track. They put quite a bit of water down. I struggle in those conditions as it is and I was just sore. My whole body was sore. The heat took it out of me. It was a difficult weekend. There was no hiding away from it. I struggled a lot in the last race. I just did not really have the go in me in the last one, like I did in the first one. I felt kind of almost a bit… Not lazy, but that kind of feeling.

That was how it felt. In-between every jump I was standing up and my legs were burning. It was a tough moto. The trouble with MX2 is everyone is so close, so if you are a little bit off then you can just be miles back. Just straightaway from the first lap it was not really the one for me. Overall, I’m looking at how I’m qualifying. Every time I’ve been in the top six. I think I’ve had three motos inside the top six out of the six. The last day here, we started with an amazing ride in the first race.

I’m not 100% sure, but I think I had the fastest lap time. My speed is definitely there. We got a little two-week break now. I think we are going to try to get a lot of hard work done and then come back in Mantova. Overall, I’m happy. The team has done a great job. I can’t thank them enough and all the sponsors and everything. Obviously, we would not be here without them. It’s been a good weekend and I’m happy.

I’m guessing even you were surprised that you went from twentieth to fifth in the first moto. No one, even the best riders, found it easy to pass around here and you went through some really good guys.

Definitely. It was a tough track to pass on. That was for sure. In the first moto I was just, like I said, going anywhere on the track and every line I used seemed to work for me. I was just coming through really good. Then before you know it I saw [Ben] Watson and [Roan] van de Moosdijk. I was really feeling it. It was a good race for me. I fought all the way to the chequered flag. I think the team worked it out that over the whole period of the race I lost two seconds on [Jago] Geerts, who was the leader, and that was on the last two laps. It would have been nice if I got a bit better of a start. It is what it is. Baby steps. That’s what we are doing at the minute.

Like you said, if you break down the week there are so many positives. On Wednesday your fastest time in qualifying was on the last lap. I think your fastest time in one of the motos was on the last lap, so that means your conditioning is there. You are there when the track is rough. If you put all three rounds together, you have kind of proven that you are there no matter what. It’s all good.

Yeah, definitely. I think especially in the last three weeks since Latvia that we are coming on very good. We are making some good steps. We have started off with having one solid moto and one really good moto. It’s never been just kind of two okay motos. Now we are going to work towards two. When we get there I believe it will be sweet. For sure we’ll stay there then and that will be the ball rolling. For the minute, I’m happy and ignoring the result in the last race. I’m happy with my riding. I’m happy where I’m at. We go from here now.

It has been hot here and it was hot in Latvia as well. Which triple header was harder on you, physically and mentally?

Physically, for me, this Italian triple header was a lot harder. I do not know the temperature difference, but I feel like it was a bit hotter. My mouth was dry after the first lap and you were trying to breathe. It was just brutal, honestly. It was a brutal three rounds, but we got through it. Hopefully at Mantova and in Spain we’ll also have another good few rounds. We have got the full team back in Mantova, so that should be cool. My teammate is joining me again. I’m just looking forward to going forward from here. For sure, I think Italy was the toughest three races I have probably ever had.

Yeah. You can easily go away from here, burn yourself out and be twice as bad in Mantova. I think for me it’s just a case of ticking the boxes and sticking to my plan. The plan is working. I’m doing everything I can. We will get there 100%. For sure, I can put all my money on it that by the end of the year we’ll have two solid motos and we’ll be fighting for the podium. Here on out we are just going to keep ticking boxes and hopefully keep having good races.