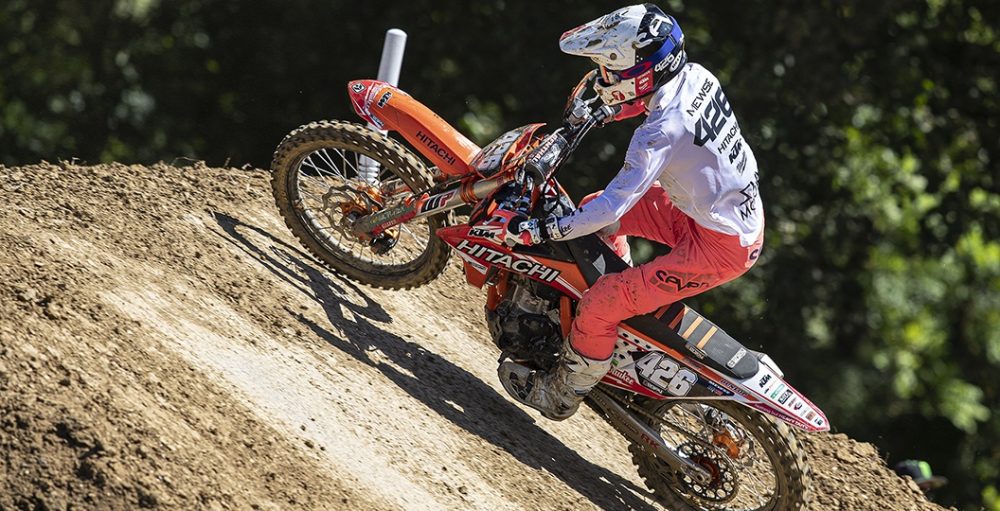 Momentum’s a crucial part of Conrad Mewse’s programme, and he has bucket loads of that at the moment. #426 made another huge step in the right direction at the Grand Prix of Italy, part one of the Faenza triple header, as he fought for a spot on the podium and proved that he has the speed to fight with the very best in the class. What did Mewse think of the day and how he gelled with his KTM 250 SX-F? MX Vice editor Lewis Phillips caught up with him for a chat following moto two.

MX Vice: The last Latvian round was a great one. The biggest question was whether that momentum was going to come into here. It looks like it did, because you maybe rode even better than you did there. All in all, a really good day. There’s even positives to take from the second moto.

Conrad Mewse: Yeah, definitely. For me, Latvia was a step in the right direction. I feel like this weekend we have taken another step again. Been inconsistent with the moto finishes, obviously, but there was not a lot I could do with the second one. When I got on-track I felt good. I’ve been riding these kind of conditions for the last couple of weeks that we have had off. It was nice to get back on some hard-pack, some technical riding and get a race going on. The sand riding is good. I love sand and things like that, but sometimes it’s nice to get a bit of a technical track. Overall, it was a solid weekend for me.

The first race was very good. There was a lot of racing going on, a lot of battling. It came down to the wire. I wasn’t very far off second, to be honest. That was a good race. In the second one, I got an okay start and pushed through well. I tried to make a pass on two guys out there to go into sixth, I think it was, or seventh. They had just put water down in-between the motos and I tucked the front end. Like I said, I tried. For me, it was a solid weekend and the team were happy. Even the second moto, the result was not there but you cannot knock me for trying. That’s all it was down to. They asked for 100% and I gave it, and that is where we ended up.

Fair to say that first moto was the most intense race you have ever done?

Yeah! That was gnarly, with the heat here as well. Everyone was getting tired and then there was us three just still going at it. Even down to the last corner or the last finish jump, we were neck-and-neck. There was just no break whatsoever. Every single lap there was someone either on you or you were trying to pass someone. It was a very intense race, but that’s probably the most fun I’ve had in a race in a long time.

Even that must have been like something for you. [Tom] Vialle’s leading the championship, maybe the best rider in this class, and you were as fast as him for 30 minutes, if not faster. I’d say at points he was definitely holding you up. That’s got to be a bit like, “Not only have I got that speed, I can also go it for the entire race.” That’s good to know moving forward.

Yeah, definitely. I got a lot of confidence from that race. There were times where I thought, “If I could just get around these two…” I feel like I could have gone again. Don’t get me wrong. Those boys every single lap are banging out crazy lap times. It was a great race. Like I said, they did not drop me. I made a little mistake, dropped back and then I was straight back on them. There was definitely points on the track where I felt like I was faster, but just could not make the pass. That was it, really. It was a hell of a battle. Hopefully there’s many more to come.

I don’t really know how to put this, but you just looked different today. It looks like you are oozing confidence. Coming down the hills, you put the bike wherever you want it. Do you feel that when you are riding? Does it feel like everything’s clicking at the moment? Almost like you can do no wrong?

Yeah. I was chatting with my Dad about it and my trainer, Stephen Sword, and that was probably the best I’ve ridden in a race ever, that first one. Just purely because that was more like the way I practice and that was how I felt. I was doing things that not many people were doing. I was launching so far down the hills. I just felt so confident. That was what showed. When I’m not confident I kind of stick to the same lines and don’t explore the track, but then I could go wherever I wanted on the track and I felt like it paid off. Like you said, it was just purely a confidence thing. I fought through on the start, which was good. I did not hold back. Overall, it was a great weekend. We ain’t got long to wait now until Wednesday, so it will be nice to turn it around and hopefully get two solid motos in.

These triple headers are working perfectly for you, because it would be a bit of a pain in the ass if you had to wait until next Sunday. You can carry this right into Wednesday and keep the ball rolling.

Yeah, exactly. Whilst this is going well I want to keep at it and keep training hard. There’s not a lot we do in-between the days. We rest a day, then do a bit of training and just recover as much as possible. Wednesday will be another hard day, but hopefully it will be another step in the right direction.