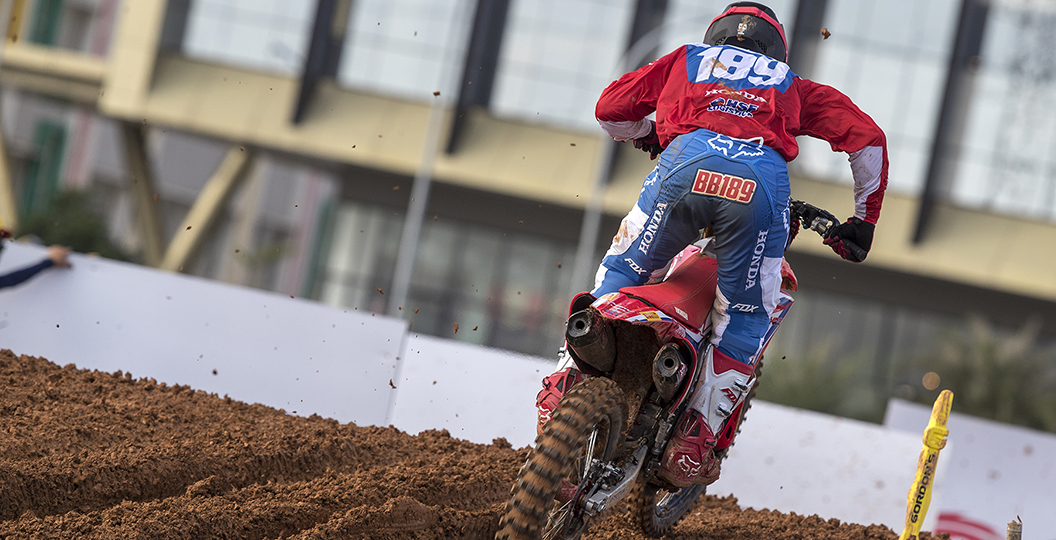 Brian Bogers enjoyed a positive outing at the eleventh round of the 2019 FIM Motocross World Championship. It was certainly one of the best races that he has had this term, yet he thinks he can achieve so much more by the end of September. What is the ceiling that he thinks he can hit? Bogers explains that in this exclusive MX Vice interview, as well as his thoughts on Palembang and battling through his many struggles.

MX Vice: A solid weekend for you, I think. Definitely one of the better ones this year. Mantova still stands out as the very best, but I feel like this was just fine. Nothing wrong with it.

I guess it wouldn’t even be surprising if the heat did properly hit you. When was the last time you even rode in conditions like this? Obviously not last year.

No. Last year I didn’t ride at all. I was out for nine or ten months, so maybe I’m still feeling that now. I don’t want to blame it on that. I’m now already training for quite a long time. I should be fit. Still, it’s tough and especially in this class. Normally on the 250 I used to push very hard the first couple of laps, then everywhere got a little bit gap. That’s not the case in the MXGP class. From the first lap to the last lap, it’s full gas.

Obviously, you know where you are results-wise at the moment. Where do you realistically think you can get to by the end of the season? Do you have a spot in mind where you look at that rider and you are like, “You know what? I think I can do that?”

I think I can be at the top five. Then again, that first moto the top five lapped me. That didn’t feel good at all. That’s why I pushed a little bit more in the second moto. Normally I think on the end of the year I can be there. That’s also the goal for this year, to be at the end of the year with the top five guys. Sometimes I have the speed, just not the good starts and everything. This weekend I was happy with my starts… Three times in the top ten. We work on that. I’m happy that it pays off with the starts, because I do a lot of starts. Now it’s just holding onto that.

Obviously you are trying to build yourself up and you know where you can be by the end of the year, but it also doesn’t help that you need a contract for next year. Then you need to kind of rush this thing along to prove that you deserve a spot on the team. It just all becomes a bit of a mess.

That’s true. I don’t want to think too much about next year for another team, but of course we need another team. I will do my best for that, but I just want to enjoy riding and then the results will come.

Have there been any issues developing the bike this season? Obviously you can practice on it as much as possible and that’s great, but you never really know how it works until you get to a racetrack. Whilst you have been building this year and going race-by-race, have you started to notice little things that you need to fix? Even now, are you still not  one hundred percent with your set-up?

When I moved to the MXGP class, I rode two weeks on the Honda CRF450RW and then I got injured. Just two weeks. Then after one year I started again. I came from the 250F, from a KTM to a Honda, so that’s already quite a big difference. Then also I missed a lot of testing and everything. This year is kind of all the testing and everything still goes on. Still, I am changing things on the bike and especially in the winter. We did a lot of testing, but it didn’t go the good way. Now we are finally on the right way, so I’m happy with that. It’s a little bit of a shame that it’s not directly good from the first race.

Obviously that second place in Mantova was a big one for you. In a weird way though, do you think it was maybe the worst thing that could have happened? You did that but then were you like, “Look, I can do this! I can do this!” Then the next time you finished twelfth, it maybe stung a little bit harder. Do you know what I mean?

Yeah, I know what you mean. It was a mud race and I’m quite good in the mud. I think that helped me a lot, but it was a second place. I didn’t expect that. I wanted to do really good in Mantova, because it was raining, but that second place… I think nobody expected that. I was really happy with that. What you said, the next race then I’m again around the fifteenth place. I don’t want that. I do my best, but then sometimes it just doesn’t work out. Sometimes it does. Like today eighth place, it’s not bad. If you are in the top ten in the MXGP class I think you are doing well, especially if I missed a whole year. I’m quite happy with that. I hope other people also see that.

Like you said, you can push the top five by the end of the year. You believe you can do that. Are you happy at the moment though? Can you accept your results and be pleased with what you are doing? Are you just coming off the track pissed off each time?

It’s a little bit of both. One thing I’m happy about is that I can do this already and one thing I want to do better. You want to always do better. I think even Tim Gajser, when he wins, he wants to do better. He wants to be better than yesterday. That’s what I also want. I’m still working hard for that. For sure, on the end of the year the results of the hard work will pay off.

Switching gears a little bit. Obviously a new track here. Kind of a pop-up track. What did you think of it, honestly?

I think it’s a nice track, but it’s a really short lap. It was around 1:30 a lap and then in this heat it’s so many laps. It’s really hot. Anyway, it’s for everybody the same. I saw a lot of comments on the social media that nobody liked it and that it’s a shame for the MXGP, but still it’s really good to be in a country like this so far from home and put this in just two weeks’ time. Nobody knows that actually the track is not there. I’m not sure what happened, but something happened with the normal track and nobody knows that. I’m still happy that we can go as far as this, because it’s a world championship. If you just be in Europe, it’s not the world championship anymore. I think this is part of it.

Actually, yes. Normally it’s I think twelve to fourteen laps and I think yesterday we did already seventeen so that felt quite long. Then, because you do the qualifying race and you get a little bit used to doing a lot of laps, you get a little bit used to it for today. Anyway, it’s ten minutes longer. We did a lot of laps. That’s quite hard for the focus. I think in the USA the laps are around two minutes, sometimes even longer, and we are here with 1:30 a lap. That’s quite a big difference.

What if I told you then that in the qualifying race of Russia there were more laps than there were here. Would that shock you?

When I looked last night, I’m pretty sure that’s what it said.

I didn’t expect that. That’s weird. Also Russia, the high speed was so high. Where Clement Desalle crashed, we saw on the data that it’s ninety-two. That’s crazy. If you crash there, you see what happens. The level is so high and the speed gets higher every year. That’s also I think the reason that so many guys are injured.