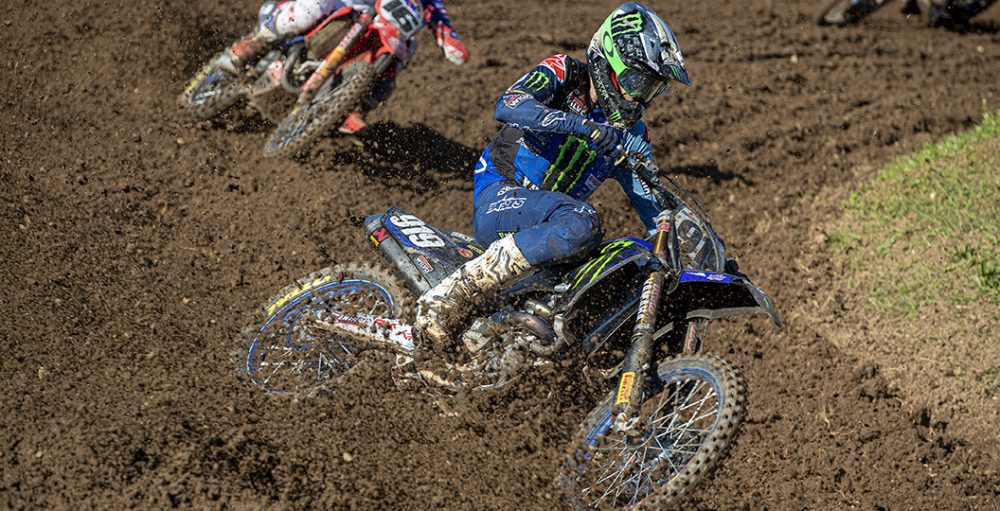 Monster Energy Yamaha Factory MXGP’s Ben Watson had a tricky time of it at the Grand Prix of France, round twelve of the 2021 FIM Motocross World Championship, as poor starts and a painful ankle hindered him in the results column. There was very little he could do on the narrow layout. It was merely a blip in an otherwise strong rookie season, as he sits eleventh in the most competitive MXGP class in history and just six points from the top ten.

Unfortunately, Watson has been told that he will not be returning to Monster Energy Yamaha Factory MXGP for his sophomore term and that is a pressing issue that is tackled in this MX Vice interview from Lacapelle-Marival. Watson is always candid when discussing everything that is going on behind the scenes and this is no different. This interview was first posted as an MX Vice post-race podcast, presented by FLY Racing, on Sunday evening.

MX Vice: Not the day that you would have wanted, but that was kind of determined after qualifying. This is a very narrow and one-lined track. No one really made any passes at all, so I guess that you knew that it was going to be a difficult day from where you qualified.

Ben Watson: Yeah, qualifying has just been the same story every week. This morning I had an exceptionally bad feeling. I do not really know why… To put everything into one lap, I was just full of arm pump and did not have the feeling or that connection to the track. Everything is so close here. There was like one second between ten guys. When you are not on it and you are missing those one or two seconds, you are literally out of the top twenty. That was the same story in qualifying this morning. The start here was really, really unfair and qualifying was bad. I cannot complain about it. To come through the pack after that was really difficult. I actually did get two really good starts… Someone touched [Jorge] Prado on the inside in moto one and pushed us both off the track. It was a similar story in the second one, but I was just coming from the outside. Everybody pushes out and just slams you off the track, but the two starts were actually okay.

I just spoke to Prado and he complained that the box was closer to the inside than normal – he obviously qualified around you. Did you feel screwed over by that? I did not even know this was a thing.

What is the deal with your ankle?

Yeah, I just came into one corner and lost the front a little bit. I dabbed my foot pretty hard. I have had everything checked out and it is all fine. Obviously, it was a big struggle after that. I was on the struggle bus. Anyway, now I know that everything is fine. I just had a bit of a hematoma on one nerve where the impact was. I had a real strange sensation riding when I actually did it. I almost stopped, but I carried on and the feeling got a little bit better. I just carried on and knew it was not a bone or something. I thought that I would worry about it after. It is a bit sore, but it is okay.

It is different for an international. You have a few top guys and that is it. To bring an MXGP round here, it is too small. It is winter for the international, like February, and you have a lot moisture in the ground. It is a lot more technical with a lot more lines. We went from last week with massive ruts from corner-to-corner and came here… The racing is better with conditions like this. It is a lot better in that way. The track was a little bit too tight to really get bars banging.

It is time to talk about next year. Next year is a recurring question, but where are we at? I think everyone knows, but in your own words…

You all know more than me. I am sick of going on the internet and reading so many rumours that I am going to Kawasaki or… It’s Gate Drop posting unofficial stuff as usual. It is not correct. It is not fair on a rider like me, because other teams think I have signed for Kawasaki when it is really not true. I have no ride for next year at the moment. It is difficult, because people go around the paddock and one person says something in the morning and by the afternoon the whole paddock knows. It is difficult to hear those rumours and see them posted all over the internet when it is really, really not true. Right now, I do not have anything. That is all I can say.

Yamaha is not looking good for next year though, as far as factory goes.

Yeah, as far as factory. I have been told that I will not stay there. It is done there.

You have no ride then. Obviously, people are talking to you.

I have got options, but it is really not what I want. That is all I can say.

What can I do? I mean, it is hard. It is a crucial time right now and I have had a terrible, terrible day. It was just one of those days. You have them in motocross. No, I am not stressed. What can I do? I can get all stressed over it and worried, but I go racing every week and give it my all. I do what I can. People can see your potential and whether they can work with you. I am known in the paddock as a person and as a rider…

Known as a wagon too [laughs].

The ‘Watson Wagon’ too, yeah. We will see. It is just patience.

I am happy with it! I have just been a bit too up and down. The bad days have been really bad. I have had three or four of them now – this has been a really bad day for me. Turkey was really bad twice and so was Russia. I have been inside of the top ten in almost every moto other than that. On the whole, you see the names and there is still no one missing in the races. This is a full, stacked field and it has been all season. You see the level of [Romain] Febvre, [Jeffrey] Herlings, [Tim] Gajser and Prado… It is insane.

Honestly, I do not believe that there is anyone who has been on this level before in America or Europe. To this day, I do not think there is anyone who has been on the level that the top guys in MXGP are on now. Overall, I do feel positive. I just feel like I am in a bit… I have been put in a sticky situation with the whole Yamaha thing. I do feel like I could have stayed where I am. The team is happy with me and so is Yamaha, but there are a few circumstances that have left me without a seat.

We have to blame Jeremy [Seewer] partly. If he had done his job [laughs]!

With [Maxime] Renaux also though, there are clauses in his contract that say that when he is world champion he has the option to go up. There are a few different situations. It just is what it is and there is nothing I can do.