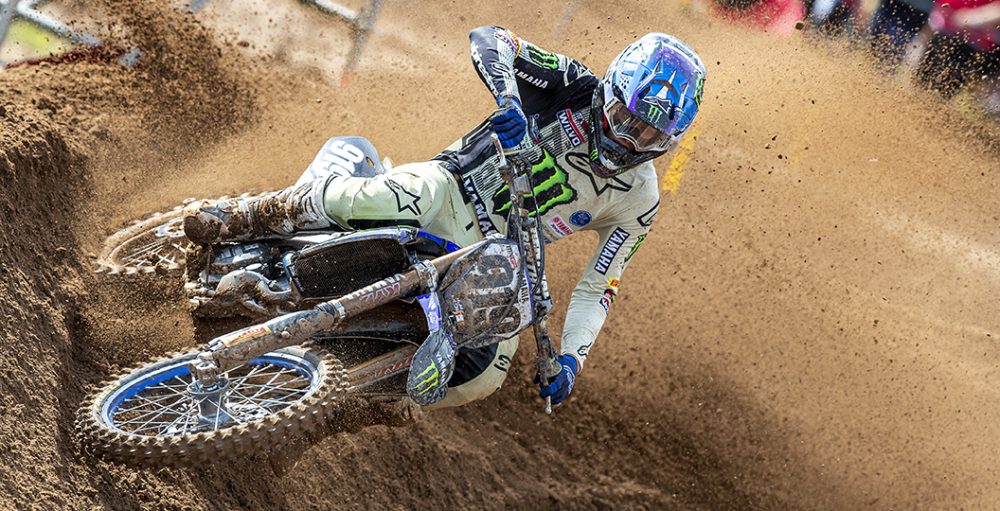 Ben Watson has quickly become a top-ten regular in the premier division, as he has not dropped outside of that area since the opener in Russia. The Grand Prix of Latvia was no different, of course, as he finished tenth overall on what would be described as an off day. Watson explains that he just did not feel as though he ‘had it’ in this exclusive MX Vice interview from the event. The fact that he still chucked his YZ450FM into the top ten is quite impressive.

Consistency is usually a struggle for rookies, just look at Thomas Olsen. Watson has been the opposite though. 11-10-9-11-9-6-11-12-12-9-13-10 have been his moto scores across the last six rounds. There is a lot of promise there and, on his day, he can clearly push the podium. Just look at how he performed at the Dutch Grand Prix! That makes him a shoo-in for Team Great Britain at the Motocross of Nations, which is also discussed at length below.

MX Vice: It was a so-so day, I guess. Bad starts from a bad position on the gate. You moved forward and got into the top ten yet again, so that is something.

Ben Watson: Yeah, qualifying screwed me over a little bit. I just struggled so bad there with taking that risk for one lap. It is the same story every week, but it is what it is. I need to work on it. Actually, we have got some time now. In these next few weeks, I need to work on those sprint laps and that intensity to try to improve in that area. On a track like today, it is almost impossible when you are fifteenth. Talking of bad starts, the second start was actually unreal. [Tim] Gajser just t-boned me on the exit. I went from like top five, I think, to miles back, so that was annoying. That is just what it is… It is the MXGP class. No one takes any prisoners.

In the first race, I just felt like… I do not know if it was a little bit emotional or not. I was just weak from the start and did not have any ‘go’ about me or strength. It was not that I was tired, but I just don’t know. I just felt like jelly. My elbows were down on the landings and I was sitting down. I was just riding around and thinking, “What am I doing here?” In the second one, it was the same story in the beginning. I took a real good start and then Gajser hit me. I was way back. Again, I just felt so weak.

I had no motivation, let’s say. It was like I didn’t even want to be out there. I kind of got over it a little bit and started getting into it. I started making progress forwards and I felt really good towards the end. It was just one of those things. It was nothing to do with my riding, fitness or anything like that. I struggled with it a little bit last year. On the start line and stuff I get a bit nervous and weak, like feeling sick. It was just like that again today. It was one of those bad days. In the end, I felt pretty good.

Gajser cut your finger up and stuff, didn’t he? So I hear anyway.

Yeah, nothing bad. It was just where he hit me on the start. I don’t know if it was like his lever or what. I think something was hanging off of my fork guard at one point. It was nothing really bad.

Was this strength or intensity? You obviously struggled with intensity in your MX2 days, so was this that or just general strength and feeling?

It was like the motivation, let’s say, wasn’t there. I just felt really iffy on the start, just not myself. You are wasting your time out there when you are not feeling 100%. I just left the gate and was like, “Argh.” I had no aggression about me. I got a bit beat up on the first laps and it was the same story in MX2. I had it all of the time. I got a lot better towards the end of the race, but this year I have been good. The start of the races have pretty much been my strong point. Today was just… A bit too much came over me at one point. I just had a shit feeling.

What can you do to fix the qualifying then? Other than just do one lap at a practice track and then stop, and basically have a competition with yourself, I don’t know what you could do.

Yeah, that is it. You go out and do a warm up or whatever, then I will put a start grid out and there is a point on the track where you start the clock. You just need to keep bettering yourself. This week we did it a little bit; Jeremy [Seewer] and I went riding together. We saw each other’s times and we just tried to get… If I am faster, then I need to make the gap bigger. If he is faster then I need to get as close as possible. It just works like that. You do one lap, stop, do another start off the mesh and go straight into another lap. It is just getting used to that stop-start and putting it all on the line for one lap. I know it is training and it is especially difficult for me to do that. I have to start somewhere and learn to put everything into one lap at some point.

Is this going to be a flat-out month of training then or are you going to take some time off to rebuild?

I will have an easy week now coming up, then I will get back to it next week. It is strange that we are having this break in the season. It is not like everyone needs to have a rest. Yeah, I will just keep going. I will just try to build some intensity after this easy week, instead of busting out a load of motos out and getting bored. I will keep it interesting by mixing up the sessions with some pyramid motos and lap times. That will help.

The ‘Nations is not going to count for points. How do you feel about that, like with motivation and stuff? If you do the MXoN then that is seven Grand Prix weekends in a row.

I don’t mind it. I would be well up for it, even if there are no points or whatever. The problem for me is if all of the other riders say that they are not doing it, then you are just going to the ‘Nations and riding around with Team Puerto Rico.

If “we” go there and win motos though, it would just make my day [laughs].

It just would not be… I don’t know. It is not the same. I would obviously be well up for it. It is the ‘Nations! Get everyone there and let’s do it. You speak to some guys and they are not up for it. I don’t know. If I know that everyone is going and it is going to be like a GP, then let’s do it. It will be strange if we are doing the ‘Nations and there is just nobody there, you know?