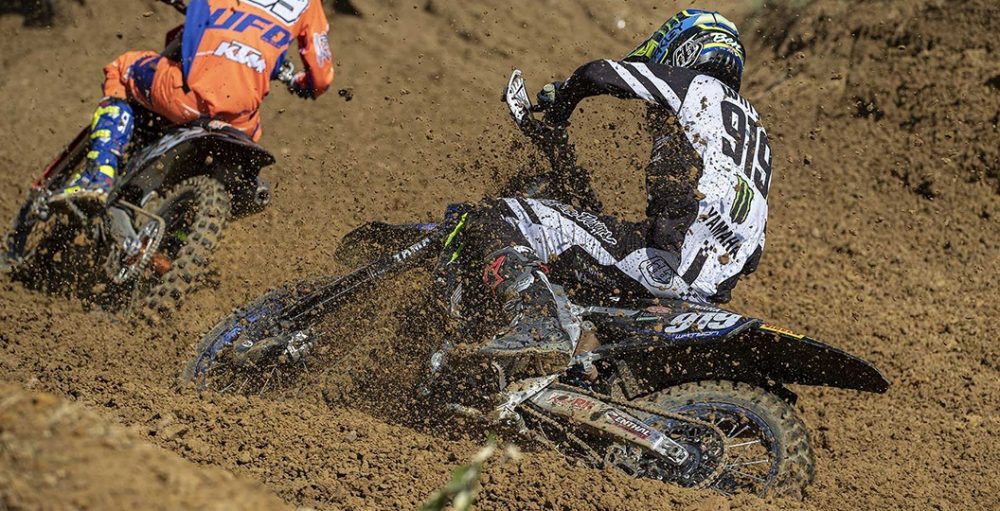 Ben Watson was quietly one of the most impressive guys at the seventh round of the 2020 FIM Motocross World Championship, as he logged the quickest lap in moto two and made more progress than anyone else in the MX2 class. The day ended on a poor note, however, as there was a vicious crash towards the end of the second race, which left him with a battered face. There is an update on that in the exclusive MX Vice interview below, as well as much more.

MX Vice: I was going to come and tell you about what a great day you had, but you look quite beaten up and not like you have had a fun day. Just wrap up how you are feeling, first of all.

Ben Watson: It could have been a really good day. The first one I just had a terrible start. I rode good. I came back through the pack quite good. It’s really difficult to pass here. With a bad start, I do not really know what I can expect for myself. I was quite pleased with the riding, just not really the end result. In the second race I opened up a little bit and came through from the middle. I had a good start but I got pushed out wide in the first corner and lost quite a few spots. I think after the first lap I was around tenth.

I got into it a little bit quicker, was putting some good laps in and felt a lot better. A few guys crashed and I got gifted a few positions, but second was in sight towards the end. I came quite close to them. That was my goal. I wanted to pass [Thomas] Olsen and [Jed] Beaton to try to get that second place in the end. With just one and a half laps to go, I came down one of the hills and I honestly don’t really know what happened. I just lost the front going into a big rut and it just fired me forward. My face just got slammed into one of the ruts and the bike came on top of me.

It just smashed my face up a little bit. I had some stitches in my chin and my lip, and it loosened my teeth a little bit. I have got a big ol’ black eye. Luckily it’s nothing else, because it was a pretty big crash. There are a few guys who have suffered worse than me. I have to think myself lucky that I’m going to be 100% to go on Sunday. I’m positive. My championship got impacted quite badly with the two DNFs. That’s not what I’m really thinking about. I just want to prove to everyone what I can do. If I’m riding good and enjoying it, then I’m happy.

I do not want to put words in your mouth, but I’m pretty sure you’d quite like to see this track go up in flames. Considering that, you were fastest on track for five laps in a row in the first moto. You had the fastest lap of the second moto, and again were fastest on track for a few laps towards the end. Today was really good from that point of view. Had you got better starts and been in a better position off the bat, podiums and maybe more would have been possible.

Yeah. With my riding then yeah, definitely. That’s the most important thing for me. If I’m riding good, then I can be happy. Everyone sees that I’m struggling out of the gate big time. It could be due to a few things. People see and they know that they can help with some different things. Everyone is trying the best they can. It’s nice to show everyone what I can do and that I’m still putting the work in. I don’t know about the track, but I came here a few weeks ago for the Italian race and I was dreading the GP here. It was really so terrible. Now it’s better. A lot better, actually. It’s definitely probably one of the last tracks I’d want to race on, but it’s the same for everybody. Everyone’s complaining a little bit about a few things, but the preparation is much better now here. They slowed it down a little bit and made it more technical. For the track, I’ve actually enjoyed it more than I would have thought.

In practice and qualifying this morning there was a lot of bike swapping going on. I think you did three swaps between two bikes. What was the deal there?

I went out on my race bike. I do not know what was going on. It was just spluttering really bad. I came in, of course, on the first lap and switched bikes. I went on the second bike, but it was completely brand new with everything. Chassis, suspension and engine. It felt pretty stiff and solid, and the levers and everything was just… Nothing is exactly the same. I had a bit of a strange feeling. I came in after doing a couple of fast laps. I felt okay, but it was nothing special. I stopped and the guys wanted me to try the bike that was having a little issue just to make sure everything was good. It was just a small electrical connection that was not really… I do not know if it was not clean or not connected properly, but it was perfect when they sorted the connection out. That is the bike I rode for the rest of the day.

In the first moto, three-quarters of the way through or so, I saw you pointing down at your front brake or something. Was that linked to the qualifying stuff or was that something different?

No, that was something different. When I crashed on Sunday, I think I damaged the brake calliper. The guys changed the lever and that’s why I had to pull in after they changed it. I’d go over the jumps and my front wheel was just locking up. It was so sketchy on the jumps. After this morning I did some swapping on the bikes and I complained about the front brake on the race bike, so they switched it. I was pulling the lever and it was not returning. It was dragging a lot. Again, on some jumps in the first race the wheel was stopping in the air. It doesn’t sound a lot, but…

It sounds sketchy as f**k.

When your wheel stops in the air on a bike, it’s so sketchy. After braking on the exit of the corners I was pushing it back out with my hand. It was kind of a lot to think about. It was strange. Towards the end of the race it got better. Then of course the second race everything was changed.

A question from Tom Neal. Maybe you know him? He wants to know what was up with the gate pick in the first moto. I couldn’t see it from pit lane, because there is a lot of stuff, but apparently you were very alone.

Yeah, I know Tom a little bit. The first one… I don’t know. On Sunday it worked good.

You were there Sunday as well then?

Yeah, both heats I was on the furthest inside. I turned third and fifth on Sunday. Basically, I just wanted to be alone. All of the top guys were going to the middle then outside. I thought if I was with some of the guys that were maybe coming from European championship racing that I would be able to get a clear run. I did exactly that in both heats and had a real good run off the start straight alone. I tried it again this morning, but I think they ripped it a little bit deeper and it was a little bit more even all the way along the straight. Obviously, on the furthest left there is a longer run. I just got boxed in completely and I was way outside the top 20. In the second one, I opened up. I had a good start and then just got pushed a little bit wide. I was still eighth or ninth or something.

Definitely good for Sunday. No worries there. Maybe your face will be a bit sore, but should be good?

Definitely. I literally have nothing. I have just got some holes in my face and knocked my teeth a little bit. My eye might be closed tomorrow morning, but I’ll be 100%.