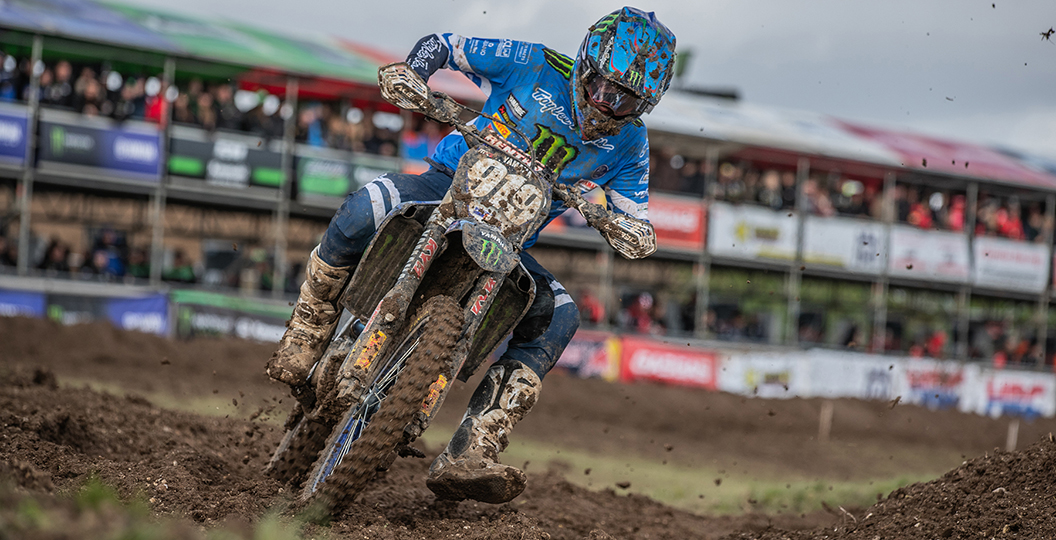 Ben Watson was set to salvage decent points at the opening round of the 2020 FIM Motocross World Championship, despite the fact that he had only ridden twice prior to the race, but a back-brake issue in the final moto cost him. Watson realises it is just the first round though and there’s no need to freak out – that much is clear in this exclusive MX Vice interview from Matterley Basin. This interview was originally posted as a podcast.

MX Vice: I don’t really know where you are at, because of this hand thing. You said it wasn’t an excuse, but when riders say that it normally means that it is actually a bit worse than they are letting on. Where are we at?

Ben Watson: The hand was absolutely not a problem all weekend. The only way that I’m getting an effect from that is just the bike time I’ve missed. It was Tuesday after Riola and I had a little crash. I put my hand down on the floor, but it was the one that I broke before. It just kind of restarted the process and I had to take another four weeks away from the bike. I rode two times before this GP. I had some pain, but nothing that was making me ride a little bit slower or something. It was just feeling a little bit of that rusty feeling. I just needed to loosen up.

Yesterday obviously it all got cut short. I needed the track time, really. That was just what it was. The weather and everything was not playing ball. I came in this morning feeling not too bad again. I was just struggling a little bit to find the flow. I was not so smooth. I had an okay start in the first one, which made it a little bit difficult. I came through. I was riding just really tight. I had bad arm pump. I’ve not been on this intensity for a little while, so I struggled a little bit at the beginning. Then at the end I just just decided to take a step down to try and find my flow. I came good.

The lap times were consistent every lap. The speed was not too bad. In the second race I had a bad start. First lap I was pushing through some guys and then the rear brake just disappeared. The guys changed the oil in-between the two races and then… I’m a rider, so I don’t actually know the ins and outs. Anyway, I lost all the fluid on the first lap. I had absolutely no rear brake the whole time. It took me a few laps to realise how to ride a bike without a rear brake. In the end, you feel like a hobby rider. Then it’s a little bit frustrating because everyone’s watching and they say, “He’s riding shit today.”

I was just going to blame it on your hand.

No, it’s honestly not my hand. My hand’s fine. It’s just been a bad weekend, actually.

It’s hard, because on the x-rays and stuff you can see the previous injury. You see the little lines where it was cracked. I didn’t want to go into detail of having real scans and stuff. It was just on my feeling. I took four weeks off, because that was when I felt my hand was ready to ride again. Now honestly I have a little bit of pain when I’m riding, but nothing that’s like I need to slow down here or there. I can ride just how I want to.

Like last year, we’ll talk about your starts. In the second race I thought you had the holeshot. How did you come out so bad? I genuinely was like, “Ah, holeshot!” Turned around and you were like fifteenth or something.

Yeah. Obviously I qualified twelfth. The inside gates were dropping a little bit slower. I watched the races before and noticed they were quite bad, so I was trying to avoid the first seven gates. Then the exit of the gates was a little bit sketchy with bumps in the ruts. I chose a couple of gates and thought, “If these are free that’s where I would go.” I was almost at the box. I think it was too wide actually. I had a real good jump and a real good run down the straight.

I thought, “I’ve got a real good start here.” I went way too wide and everyone just snuck up the inside of me. Next time I’ll definitely try to go a little bit more inside. It was just one of those things you just want to try. Actually when you go outside a little bit sometimes you are with the slower riders. Sometimes they are not the best starters, or sometimes they are. You never know. When you are with the top guys you know everyone is going to be tip top on the start. I try sometimes to go a little bit wider to give myself more space as I leave the gate. It worked in that way, but in the first corner I was way too wide.

I think I know the answer to this: Much happier this year, right? Happier with the whole situation and being a contender in the class? Your head is just in a better place. I can kind of tell.

Yeah, definitely. I’m enjoying it a lot more. All my riding has been good so far. Just the first round. I’m honestly not bothered at all about my day today. The only thing is I’m guaranteed to go on social media later and see how sh*t Ben Watson is. I don’t care. I don’t care even what the team think in some ways… Even if they think I’m struggling. I really just want to focus on myself and enjoy it, even if it’s days like today. If this was last year I’d be spewing. It’s just the first round. Everyone is still positive. The team always support me a lot. I don’t ever feel added pressure from those guys or anything. We’ll just keep moving forward. Obviously it’s my last year in MX2 and my last year with the team, so we want to make it a good one.

You need to build yourself up now with bike time and all of that. How long do you think it will be before that comes good? You’ll obviously have a good week this week and a full weekend at Valkenswaard. Do you think maybe Argentina could be a good point?

Yeah. It was just the four weeks that I missed. It’s not honestly really that much. It’s just at this time of year you start to do sprints. Even on the first lap of the first race I was gassing a little bit. Just my lungs had not been… You can try to do sprint stuff in the gym and try to replicate riding, but honestly nothing gets close to the adrenaline and the heart rate on a motocross bike. The only way I could do that is getting back on the bike and being here at these races. Each weekend we’ll keep building. Valkenswaard next week and I’m really looking forward to it.