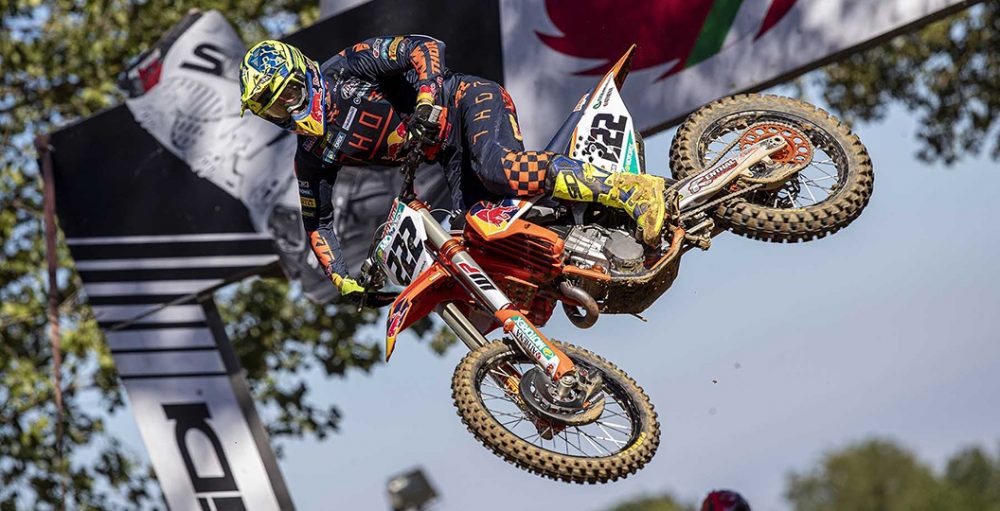 Antonio Cairoli was much better than most will give him credit for at the Grand Prix of Italy, as he chased the leaders down and clearly had race-winning pace. More Grand Prix wins could be on the horizon, bearing that in mind, but where is his head at after moving into second in the championship standings? That is discussed in the exclusive MX Vice interview below, as well as the niggling shoulder and knee issues that seem to be getting a lot better.

MX Vice: Third overall on the day, but a really positive day I think. A lot of riders could have won today, including you. The speed was there. That’s good moving forward. I feel like everything is in place and where you want it to really push on. All positive, I think.

Antonio Cairoli: All positive. I’m happy overall, of course. In the first moto I made some little mistakes that I need to correct, because otherwise I make it very difficult for myself all the time. The start was not the best in the first moto also. I went a little bit wide on the corner again and [Ivo] Monticelli got a little bit deeper on the braking, and we got together. Otherwise I was third or fourth, then I ended up eighth or something. It is very difficult to pass with a track like this. If you are to pass somebody, you need to spend a lot of energy. The track is mostly one-lined and sketchy, also because of the hard pack.

I’m happy, like I said. First moto went good. Third was good. Second moto again I had a very good start. Jorge [Prado] was in front, but I was second. In the first corner again I made another mistake. I hit a ripped part of the track and I went a little bit again long on the braking – I hit the bank again. From second I went back to fifth. Then on the first lap I got in touch with [Clement] Desalle. I lost another two positions, which is very difficult like I said before to make it up and pass the guys. The speed is almost the same for everybody. I lost some time again.

From seventh I get back to third, which was good of course. I need to stay more and more in front in the first laps – try to not drop. Try to stay with the guys in front as much as possible, because then in the end maybe I can try to make some passes. If I come from the back always then I feel tired, so in the end I don’t have as much energy to make this gap closer again. Overall, I’m really happy abut the podium.

Maybe you don’t even know the answer to this, but sector one was kind of your spot in motos one and two. You went purple there a lot in moto one and even in the second moto. Do you know what you were doing differently there or better than the other guys?

I don’t know! This morning on the timed practice that was my worst sector, like always. It was the same in Latvia. I somehow felt better in this sector in the race and I really liked to attack this part of the track. There are small things that we need to work on and we need to try to not make small mistakes like this – try to stay more consistent at the beginning of the race especially.

Yeah, of course. When you stay in the front in the beginning it’s always very important you see the lines of the guys. You can maybe see where you can be a little bit faster and maybe try to attack when you have the possibility. If you come from the back also… I mean from eighth or ninth place then you always need to invent new lines. You never know which line is the best for making a pass on a guy who is the same sped for you. It’s kind of difficult, but if you stay with them from the beginning of the moto then I think you can find for sure some places to pass.

We are back here on Wednesday. It should be similar conditions. Are you going to change much before then with bike set-up and stuff like that?

No. I think really most of the bike is okay. I really like the set-up. I enjoy the riding. Also, I need to adjust to these mistakes that I do myself. The bike can improve, of course, but it’s not the moment to test something new. It’s just the time to get along with the track and try to be as consistent as possible.

Second in the championship now with a 60-point gap to Jeffrey [Herlings]. After your start to the season, where there were a few issues, it must be quite nice to get into second and just focus forward.

Yeah. I’m really happy. I’m really proud of what we did with this break. Now I’m 100% fit on the top, whereas at the beginning of the season I was still 50% riding conservative and everything. Now I see that I can attack the track and make passes. This is already a big step forward. Now it’s a matter of staying healthy, not making crashes or trying to tap the knee again. That’s not really bothering me, but I have to be always very careful. I do not want to have another twist. It’s really important, like I said, to be consistent and to always be there with the podium. You never know what can happen. The season seems to be going for another couple of rounds at least. We try to be prepared for everything that comes.

Shoulder and knee are pretty good now? Nothing to even really complain about?

No. Actually, the shoulder I’m really happy about. No problems at all. I really enjoy riding again with my arm and everything. My knee is bothering me a little bit. The one I twisted in the beginning of the season, it’s a little bit better than the other one. I normally don’t have problems with the other one, but since there has been some cartilage damage. After Latvia I went to Belgium to make a scan and there’s a quite big problem of cartilage, which always make the fluid on the knee. I need to wear a brace, particularly to try to bend my knee in a different way during the week and also there are some other things I need to do. This is the biggest problem at the moment, which is not really a stability problem. It’s more a pain problem.

Is a thing where at the end of the year you are going to have to have surgery on your knee or is it just going to be something that gets better with time?

I’m trying to do some therapy with some PRP, which is something new to remake the cartilage with the knee. Normally it works good with the younger people. We are trying everything. It’s not really the case to do a surgery yet but we will see, because if I keep riding like this I cannot run anymore. This is a big problem for me, because most of my cardio training I was doing with running. Now I need to cycle and do a lot of stuff, which I’m not used to. I’m still learning how to get the fitness that I had before with running, which was a big part of my training.